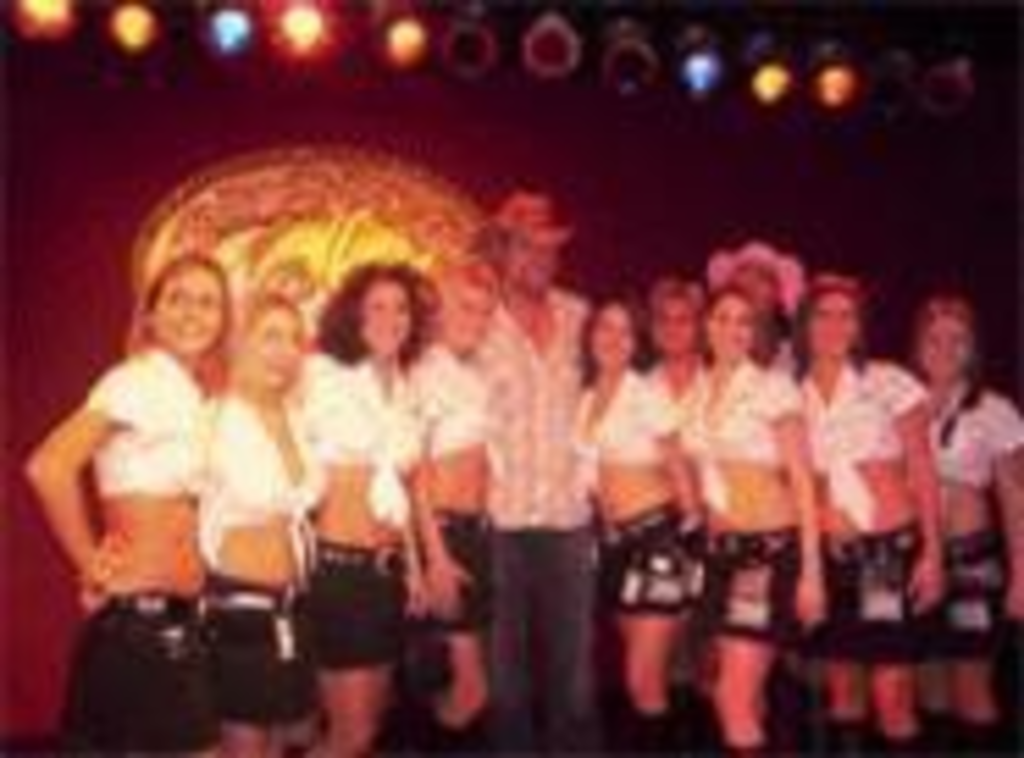 We hear that Toby Keith loves his bar. We, though, need a couple more mason jars of cheap beer to decide.

We recently paid a visit to Toby Keith’s I Love This Bar & Grill, the country singer’s new food-and-drinkery at Harrah’s Casino. Important clarification for our twee-listening readers: Toby Keith is the purveyor of the angry-American, tell-it-like-it-is, Dixie Chicks-wranglin’ brand of music, not the “I like it, I love it” Monday Night Football guy. We’re talking about the crooner of the classic line We’ll put a boot in your ass.

Toby himself rode into town November 17 to personally put a steel-reinforced toe to his place. We’d never been to such a gathering, and we found this one to be a weirdly interesting affair, thanks in part to the fawning questions from local country-station DJs. Tell us about the food, Toby! How do ya think your Sooners’ll do? Then came the best part of the day: the photo session, in which Toby posed with his Whiskey Girls (tarted-up talent in white, midriff-baring tit tops, black miniskirts and black cowboy boots). Then Mr. Shock’n Y’all mugged next to a couple of giant bologna sandwiches that each measured 2-1/2-square feet.

“What’s going to happen with the sandwiches?” we asked one of the PR people. She told us that they would be thrown out because both sandwiches were salmonellafests after sitting out for about 10 hours. Yup, wasting food the week before Thanksgiving. That’s the American way.

Alas, Toby was not present when we returned the following Saturday night with Research Assistants Ryan and Rebecca, who deemed it a mall-style bar for its theme-iness. The décor was very Hard Rock; Toby Keith memorabilia lined the walls and a massive red-white-and-blue-neon guitar covered the ceiling over the bar. A plethora of flat-screen TVs showed college football and ESPN. From the small stage, Ryan Shupe and the Rubber Band serenaded us with some decent country and bluegrass. We edged through the crowd and ordered drinks: PBR served in a mason jar ($5) and the Whiskey Girl, a fruity mix of Jack Daniel’s, amaretto, pineapple and orange juices and grenadine. Served in a small glass, it set us back $9. (The jar o’ beer had a better alcohol-to-price value.)

The place was packed, thanks in part to regular casino traffic as well as overflow from neighboring Voodoo Lounge. However, we noted that TK’s attracted a young crowd on its merits alone. The first people we spotted were Tilden and Jeremiah from local band the Litigators. Tilden quickly excused his presence by swearing he was there for novelty’s sake. “I love this bar … and grill!” he added with a sarcastic twang.

After wandering around, we found a group that echoed that sentiment in a less ironic way. We met 23-year-old “Midget,” a cute woman with long blond hair. She and her large circle of friends all know one another through dirt-track stock-car racing at Lakeside Speedway. She was cuddling with her boyfriend, 35-year-old Chad, a tall, good-looking guy with bright-blue eyes, dark hair and hipster glasses. He revealed his philosophy about cars and women: “If you can’t race it or take it to bed, it ain’t worth having. Tits or tires cost money.” Words to live by, indeed.

Coincidentally, the next group we encountered happened to be friends through a motorcycle road-race team. And the sexual innuendos continued to roar like a two-stroke engine, from 23-year-old Dustin and 24-year-old Jeremy. Both men, who have been friends since their days at Oak Park High School, are big Toby Keith fans, so we showed them pictures from the giant bologna-sandwich press conference.

“Does your bologna have a first name?” we asked.

“Kielbasa or Q-bosa,” he replied. Divulging a penis nickname is just cause for derisive laughter and mockery in the Night Ranger boudoir.

We decided to change the subject as quickly as possible and ask Jeremy’s and Dustin’s opinions about a country ballad we wanted to compose. We proposed the title “You Ain’t Foolin’ Anyone With That Wedding Ring (We Know You’re Gay).”

Dustin hated it. Jeremy suggested changing the subtitle to “You’re Queer as a $3 Bill.” Thanks. We’ll credit your kielbasa in the liner notes if we cut that Nashville record deal.

Jeremy, a lively, outgoing guy, then asked if he could help us with interviewing. Delighted to be Kielbasa’s wingman, we told him to pick someone he wanted to meet. That’s how we ran into 22-year-old Kayla and 21-year-old Stefanie, two cute University of Kansas nursing students. As we chatted, a couple of older drunk guys with drawls felt compelled to loudly point out that Kayla had a hickey on the small of her back, then tried to get a close-up look. (Actually, it was a bruise.) One of the guys mumbled something about garage sales and guys’ clothes. His sister, a woman with a kind face and a gold cross around her neck, tried to shush him, then put her arm out to stop him from groping at Kayla.

“Write that down,” Kayla said, disgruntled. “Men stare at women like we’re pieces of meat.”

“It’s disgusting,” Stefanie agreed. They recalled a run-in at the deli at another casino, when some guy bluntly explained how much he wanted to, uh, wield his bologna loaf. “He was, like, 80 years old,” Kayla said.

“It’s the worst when guys dance with you … they come up behind you, and it’s like, ‘Stop poking me!'” she continued, pantomiming a man dancing with his arms in the air and his pelvis a-thrusting into her back.

Ah, the drive-by grind on the dance floor. That’s one situation that deserves a boot in the ass, damn straight.