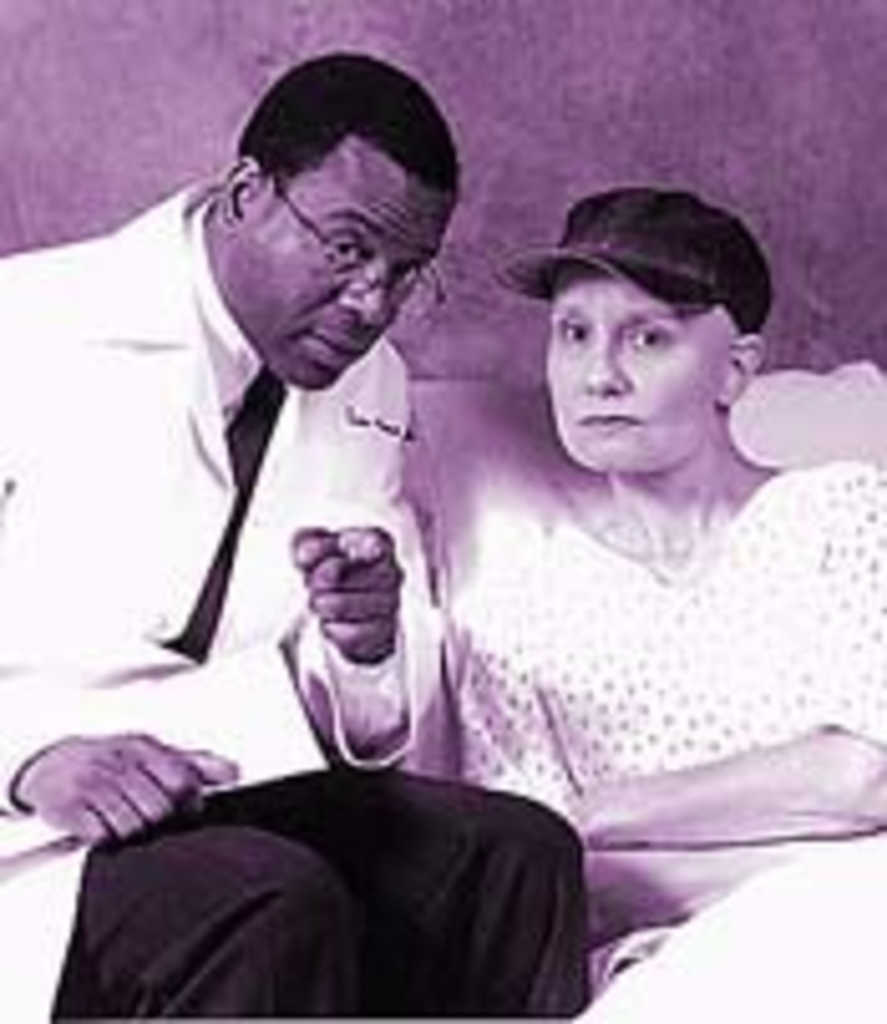 Much has been made lately of the toothless standing ovation — audiences getting to their feet after any old thing. Yet at the opening night curtain call of Wit at Unicorn Theatre, I couldn’t help but lose my lap and join the crowd giving actor Peggy Friesen the s.o. she deserved. Hers is a performance you miss at your own peril.

As Vivian Bearing, a professor of 17th century English poetry who has advanced ovarian cancer, Friesen takes us through her journey from a tough-shelled intellectual to a brittle child-woman in need of simple kindness. She makes no pit stops; she’s stoked on words, and we’re flying right behind her, her breeze alternately stinging and cooling our faces.

Playwright Margaret Edson is an elementary school teacher in Atlanta who has previously worked in the cancer and AIDS unit of a teaching hospital. She must have absorbed a lot during that experience, and lucky for us she released it in the form of this coruscating, visceral, and funny script, one that will probably stand as the last great play of the past century. If that sounds like hyperbole, just try to find another script from last year that breeds such respect.

From the start, Edson employs a theatrical device that often flops: the broken fourth wall and the acute self-awareness that break produces. “This is not the play I would have written,” Vivian says, adding that she’d go for something more pastoral. Speaking both allegorically and in real time, she concludes her opening monologue with, “I have two hours to live.”

The line gets an honest laugh, not one constructed from the audience’s discomfort. Scott McPherson’s play, Marvin’s Room, did something similar, giving a potentially morose script sharp barbs of humor. Whether Vivian is shaming her students or playing verbal Ping-Pong with her medical team, the lady’s got a way with the trait of the title.

Director Cynthia Levin rightfully decides to pace the script without a breath. Witness the second scene, in which Vivian says, “I’ll never forget when I was told I have cancer.” Not even a beat transpires before the lights are up on Darryl Stamp’s Dr. Kelekian, who comes back with, “You have cancer.” Any pause a second longer would have wasted the line; here, it induces another laugh.

Vivian’s other doctor is sterlingly played by Michael Andrew Smith, whose character, Dr. Posner, takes bedside manner to record lows. When he has to be reminded to ask Vivian how she’s feeling before he lets loose a cold, brusque list of spot checks about metastasis and IV drips, you wonder why this man became a doctor in the first place. Let’s hope the medical residents under his watch, played by Michael Kruse, David Blake, and Andrea Ellis, find a different mentor, one with a little heart left to give.

On the flip side of the chart is Karen Errington’s Susie Monahan, the kind of nurse who works the graveyard shift because the patients are more likely to be alone. Monahan’s effortless empathy and capacity for touch open up something in Vivian that had been hermetically sealed. One of the two scenes that blows the audience away — there are sniffles all around — is between Susie and Vivian. They’re simply sharing a Popsicle, but the act strips Vivian of her defenses while Susie picks up what’s been shed.

The other scene features Friesen (of course; she’s never off-stage) and Janie Fopeano as E. M. Ashford, a professor from Vivian’s youth who had a hand in creating Vivian, the unforgiving academic. With Ashford in Vivian’s bed reading a children’s book called The Runaway Bunny, what manifests itself is nothing less than the arc of a human life. What could have been precious in less able hands than Edson’s becomes an unforgettable moment in an extraordinary play.

Two white curtains before a two-panel screen pretty much make up the set, designed by Atif Rome. The curtains effectively whip open and closed to change locations and years, and the screen, which stands blank for nearly the entire play, is finally put to devastating use in the play’s final seconds. What we’ve taken for granted as a mere backdrop becomes, with the help of Jeffrey Cady’s lighting design, a metaphysical invitation to another level of consciousness. Audiences may be too racked with emotion to say anything, but they’re no doubt thinking, “Wow.”

When a co-worker of mine was told Wit was about a woman with ovarian cancer, she made that “ugh” sound that says, “I couldn’t bear it. Why would I want to go see that?” But that’s the job of any timeless literature or art: to take you away from all that is easy and put something you thought you knew in a whole other light. Wit is a play that earns both its emotional wallop and its standing ovation.