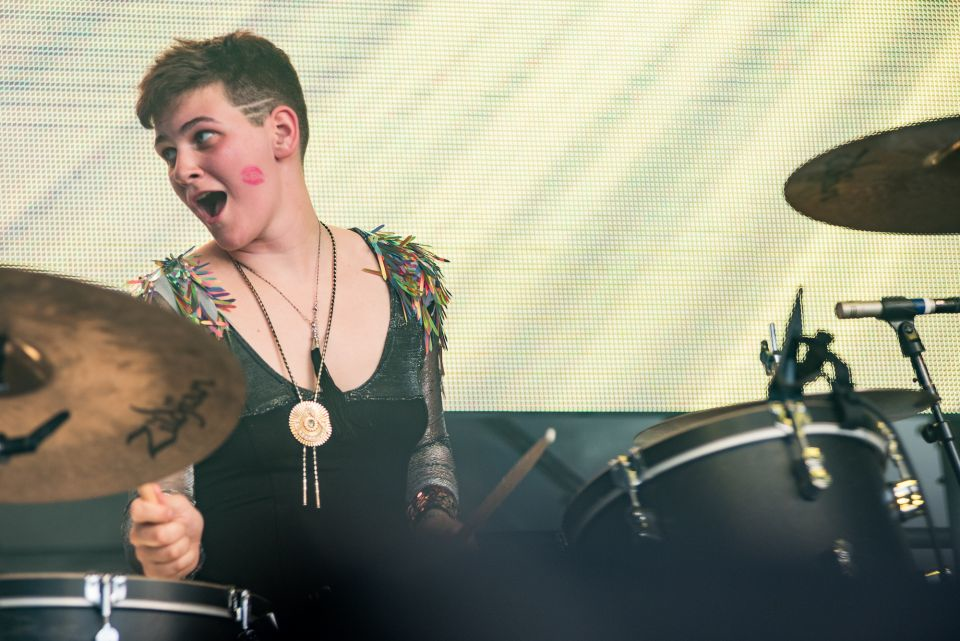 Seattle rock ‘n’ roll quartet Thunderpussy is all about riffing and wailing. Is self-titled debut — released earlier this year on Stardog Records — is a round dozen of killer cuts, but the band also shines in live performance. Replete with costumes, rock jumps, and high kicks, Thunderpussy brings a visual element to its shows that is sorely needed in an age of black t-shirts and beards. It’s matched by Thunderpussy’s music videos, which play out like mini movies, whether they’re narrative or performance-driven.

Drummer Ruby Dunphy was cool enough to speak with me by phone from Texas last week, where the band was on tour. We talked about the band’s visual style, battling the mundane grind of the road, and how you need to put your phone away when they’re playing. 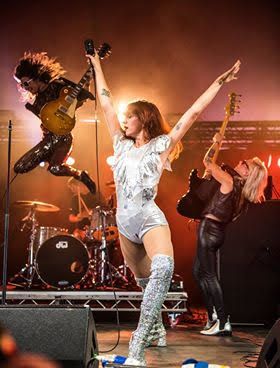 The Pitch: This is a question that I always have: you all look incredibly awesome onstage, but with bands that have outfits and costumes such as yourselves, how do you transport them and keep them clean?

Ruby Dunphy: I’ll give you the insight into us, at least. I don’t know about everyone else, but we basically have one bag where we all store all the shoes. I like to keep mine separate, because mine get super-stinky. Then we have a giant suitcase — we call her “Big Red” — and that’s where we put most of the show clothes. That’s dedicated to clothes for the stage, and then everything else, we just keep in our own bags.

As far as keeping them clean, I don’t have a solution for that. [laughs] Just wherever we go, we try and look and see if there’s laundry in the complex. I know I’m doing laundry in Chicago, because I know where I can find facilities there.

The vague practicalities of touring occupy so much of a band’s time. How do you occupy yourself when you’re touring?

We all occupy ourselves in different ways. I read — probably more than I should. I bring 3-4 books on every tour, and I will just drown myself in them and then, when I feel like I’ve gone too crazy and I’ve read too much, I’ll explore. Leah and Molly and Whitney are more explorers than I am. They like to get to know a town, no matter where we are, especially Leah.

We’ll be at a Holiday Inn in the middle of Bumfuck, Texas, and she’ll get up every morning and walk around and try and find coffee. Imagine rural Texas, and Leah — with bleach-blonde hair and covered in tattoos — just looking for a Starbucks, going over highways and stuff. We all have our different ways.

On this tour, I have Infinite Jest, by David Foster Wallace. I don’t know if you’re familiar with that one?

Not light reading, but definitely one that’ll last you for a long trip.

I know! That’s why I brought it, because last tour, I brought two novels and collected stories of The Moth, and I finished all of them, really quickly. I was like, “Shit!” So I brought that one on this tour and I know that I will not finish it in six weeks, so I’m pretty stoked on that. But, like you said, it’s not a light read, so I brought a couple other light reads, so when I go insane, I’m not stuck with this. I brought another edition of The Moth, because I love short stories and I love The Moth.

That sounds like a healthy way of spending time on the road. So many people are so inclined to just go straight to their phones. And bringing physical books, instead of a Kindle, evokes kind of a romantic image, with a musician sitting in a club, reading.

I’m glad that you think that, because I feel like a fucking dweeb, sometimes, in the back of a club doing that.

The production values on your videos are insane. Even your performance videos look like these massive things. Are these narrative shorts and cinematic performance shoots a way to bring your stage show to the screen?

It’s all in the film team, which we’re really lucky to be close friends with. They have the same vision as we do, where we want to treat the video as a piece of art, not just secondhand or “Let’s just throw this thing on YouTube.” With everything we do, we want there to be intention, artistic value, and some sort of depth to it.

When we have the live videos, you can’t just just shoot a performance with one shot, half-assedly, because you can’t do that with any other type of performance — you can’t do that with dance or theater or anything. Why so many bands think it’s okay to do that with music is beyond me. We just really want to make it as artistically creative as we can, and that’s where the film crew comes in, and that’s why we get so mad when people film our shows and put them on YouTube, because it’s just a shitty iPhone recording in the midst of what we’re trying to actually represent.

That makes a lot of sense. Why would anyone want to watch this grainy image with blown-out audio, when you have this gorgeously lit performance video in which you’ve invested so much time? I guess it’s just a way for people to prove that they were there?

Man, I don’t know. I think so. I really think so. It’s like, they were there, they saw it, and now they have some sort of ownership over us. I don’t really understand it. I don’t take my phone out at concerts, unless — [sighs] actually, I don’t really ever do that. I think it’s ownership.

Last night, there was this woman in the front row, and she was super-cool looking and beautiful. Out of nowhere, her friend came in, and they turned their back to the stage and started taking video selfies. It was just like, “What the fuck are you on?” And then, they looked down at their phones for the whole next song, because they were posting it. It’s so weird that I can look at a person and know what they’re doing, without ever looking at their phone. It’s trippy.

How is it, as an artist, to change from being the reason that people are there to becoming the background for somebody else?

It’s still shitty. It feels like people don’t value art as something that’s not on a platform or in a frame, anymore. It feels like they value it like a background or an accessory. It feels like I’m an accessory at that point, because I know that I’m going to go on their Instagram or Snapchat and they’re going to be like, “This is what I did” or “Look at my toy that is this band playing behind me.” I don’t wanna be that.