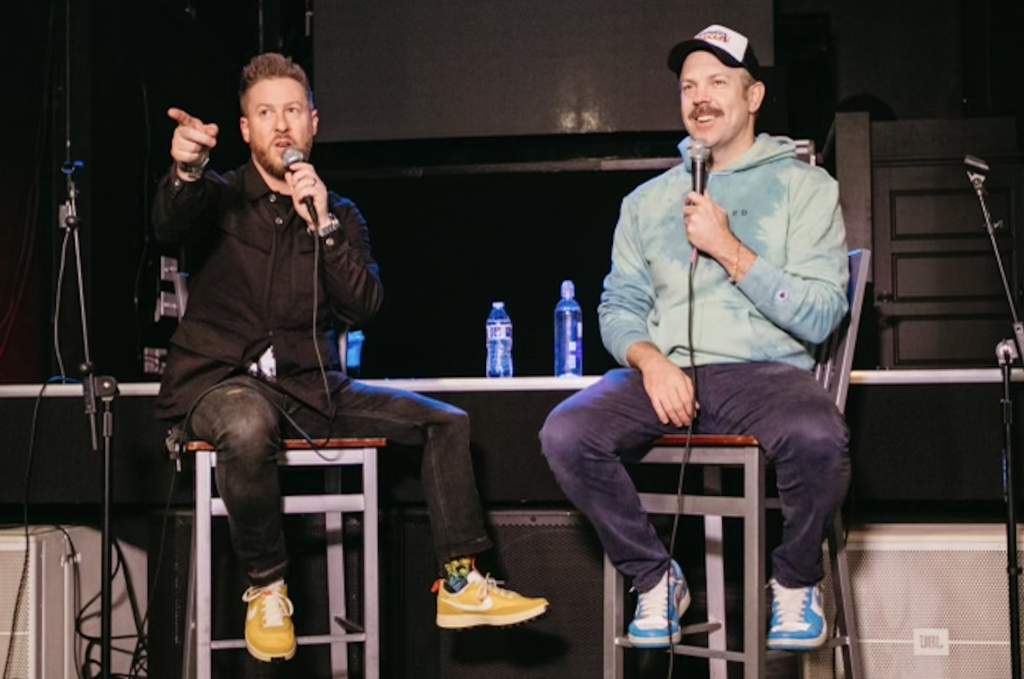 In a press conference this morning at Uptown Theater, THUNDERGONG! co-founders Jason Sudeikis and Billy Brimblecom answered questions ahead of Saturday night’s 6th annual event. The revue show mixing music and comedy serves as a fundraiser for Brimblecom’s charity Steps of Faith Foundation, whose goal is to provide prosthetic limbs for those in need—restoring mobility and restoring possibilities.

The line-up for this year’s event includes dozen of performers, including Wynonna Judd, Will Forte, Fred Armisen, Sam Richardson, and British musical act The Darkness.

Ted Lasso co-star Coach Beard (Brendan Hunt) is also making an appearance, as he and Sudeikis flew across the pond last night while memorizing lines for the final episode of the next season.

Steps of Faith reconnects amputees to their communities, families, and workforces by relieving the financial burden of prosthetic care. This year’s donation goal is set at $500,000. With a rate of approximately $500 per device and procedure, this would provide a ballpark of 1000 new limbs to those in need.

Brimblecom himself is an amputee and the THUNDERGONG! events began as a fundraiser among friends for his first device.

“You might not be aware of this, but we have some foundational issues with the healthcare system in this country,” Brimblecom deadpans at the media event. “People could be walking around on a robotic leg like I am, and if what’s stopping you is bureaucracy and money, well that’s injustice.”

“I love watching him get angry about greed,” Sudeikis follows up. “That’s why I come back and do this. It’s not just the person missing the appendage out there. The situation affects everyone around them, including friends and family. This all started with my buddy Billy being in the exact same position.

A very limited number of tickets for Saturday’s show are still available for $69.

Highlight’s from last year’s event are below: