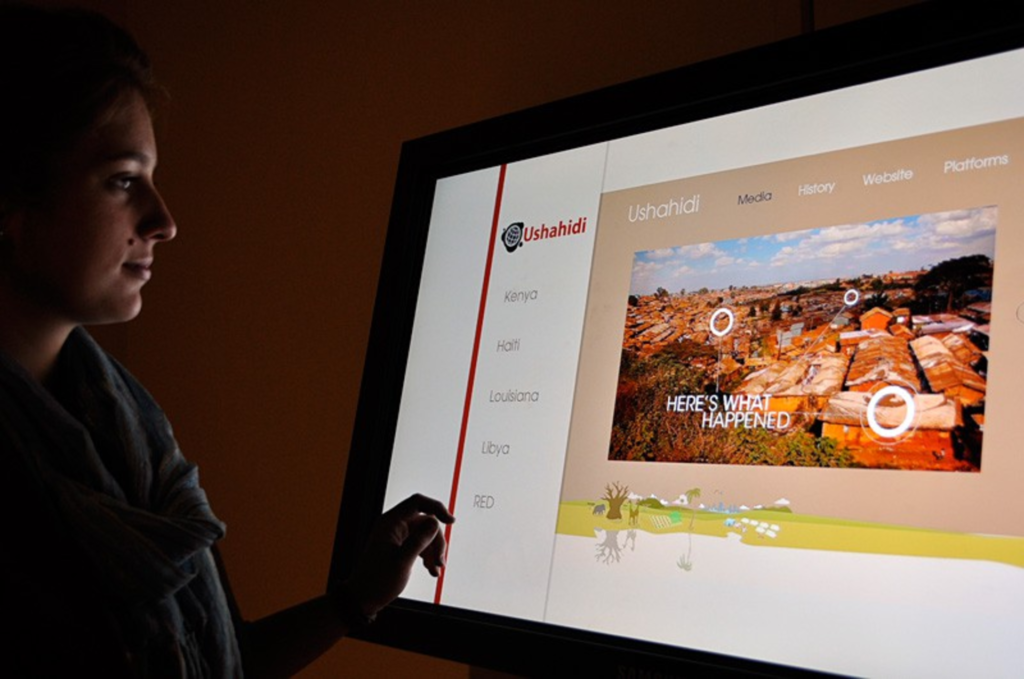 An ambitious group show and separate sets of work by two local artists differ in approach and execution but share a curiosity about how we view ourselves — and who’s watching us. At H&R Block Artspace, five artists with international profiles ask difficult questions about privacy and security. And it was a satellite image that helped inspire Shea Gordon’s contributions to the Leedy-Voulkos group exhibition Vanguards and Visionaries: Kansas City Women in the Arts. Kansas City photographer Michael Sinclair doesn’t shoot from spy-cam altitude, but his installation at the Dolphin Gallery keeps an eye on crowds (and their lack).

On Watch, now at H&R Block Artspace, examines the subject of surveillance with works by Taysir Batniji, Mark Lombardi, Nicolas Provost Hasan Elahi and Jananne Al-Ani. Artspace director Raechell Smith, curator of the show, explains her decision to include a website developed by a nonprofit technology company among works created by artists.

The Pitch: You’ve included a touch-screen monitor outlining Ushahidi, an open-source platform designed to crowdsource information. It has become an important resource during political crises, epidemics and natural disasters. What’s the art connection?

Smith: My introduction to Ushahidi happened a few years back. A friend, then working with Eyebeam, an art and technology residency and exhibition program in New York, told me about a crowd-mapping platform that had been developed by a group of people, including previous Eyebeam fellows. The project stuck in my mind as an innovative and creative use of social media because it connected people in a way that allowed communication that was essential, rather than shallow or simplistic. It resonated with me as a useful conversation in the midst of a lot of chatter.

When I began to think of the presence of surveillance in contemporary art for an exhibition, I thought again of Ushahidi — this time as an empowering reversal of surveillance — where people were taking control of information and directing how that information would be used.

There are many artists and nonartists who are using social media or other technologies to surveil themselves or watch others. Hasan Elahi is one example, and his work is included in On Watch. Wafaa Bilal is another example, but his work wasn’t a perfect fit for the exhibition.

In the exhibition, its presence represents a statement, a potential that is anything but ominous and gloomy. And I wanted young artists and students at the Kansas City Art Institute to know about this important, impactful work being done by young creatives around the world. It didn’t matter to me that it isn’t referred to as art.

In Public Domain, at the Dolphin Gallery, photographer Michael Sinclair presents quiet landscapes of tree-lined Kansas City boulevards. Also on display are some of his crowd scenes: people in the stands at a ball game, in line outside the Kauffman Center for the Performing Arts’ open house, attending city-government meetings.

The Pitch: Your Saturday-morning walks and your afternoon conversations with your mother, who has lived in Kansas City for 72 years, helped shape this exhibition. How does your experience of this city — and your mother’s — affect the photographs on display?

Sinclair: My mother is from a generation that takes citizenship seriously. Growing up, I remember she saw to it that the sidewalk in front of our house was always clear of snow or leaves. This was done not for us but for the benefit of anyone walking down our street. She expected neighbors to do the same. A booster and a critic, she would come to the city’s defense but also point out its shortcomings. The photographs in Public Domain are an attempt to record this notion of citizenship — from sidewalks to school-board meetings.

They are also about looking for a kind of Kansas City-ness, finding elements that seem essential to this place: moments of drama and emptiness in the landscape, the ubiquity of limestone, the way trees often dominate a view. Most of this looking was done at a slow pace, on foot, with my dog, Polly, next to me.

How does your decision-making process differ when you photograph people rather than landscapes? Does it change in interior versus exterior shots?

At the public meetings there are usually TV camera people there, and I like to start by setting up next to them. I’ve found it’s a good way for people to get comfortable with me being there, and I like the idea that my photographing is a kind of quasi-journalistic activity.

After that, it’s a matter of reacting to the event like the other reporters do, except I’m interested in the audience and not the speakers. With the landscapes, I have more control of where I put the camera [relative to] the weather and time of day. Also, if I don’t get it on the first try, that’s OK. It’s easy to go back.

In Vanguards and Visionaries: Kansas City Women in the Arts, Shea Gordon exhibits drawings, handwritten notes and an architectural model related to a fictional, Dead Sea-themed casino. She began the project in 2004.

The Pitch: One of your works in the exhibition is a letter to casino mogul Sheldon Adelson describing your proposal for a Dead Sea-themed casino in Las Vegas. What was his response?

Gordon: I have not sent the letter yet.

What are you waiting for?

It depends. I just haven’t gotten around to it. I think most likely I will send it, but I’m going back and forth.

The casino building is very distinctive. What inspired its form?

The four wings of the building are taken from a satellite photograph showing the contour of the evaporated Dead Sea.

You describe the casino as “The only cradle-to-grave casino in the world. Truly family-friendly, designed to accommodate those individuals who realize life’s a gamble.” Why is a casino an apt metaphor for life?

Since I discovered that the Dead Sea was shaped like an embryo, the year my daughter was born and my mother died [1982], and being an environmentalist, I saw the Dead Sea as a metaphoric gift from my mother to her granddaughter.

The “gift” was that the symbol of the Dead Sea became a metaphor for the eternal regeneration of life. In the face of the major anxieties of our age — nuclear holocaust and environmental collapse — we still need to keep the faith and believe that we are evolving into a more tolerant, enlightened and just world. Life is a gamble, a game. The Dead Sea Casino welcomes everyone into the game. Each individual has an equal chance.