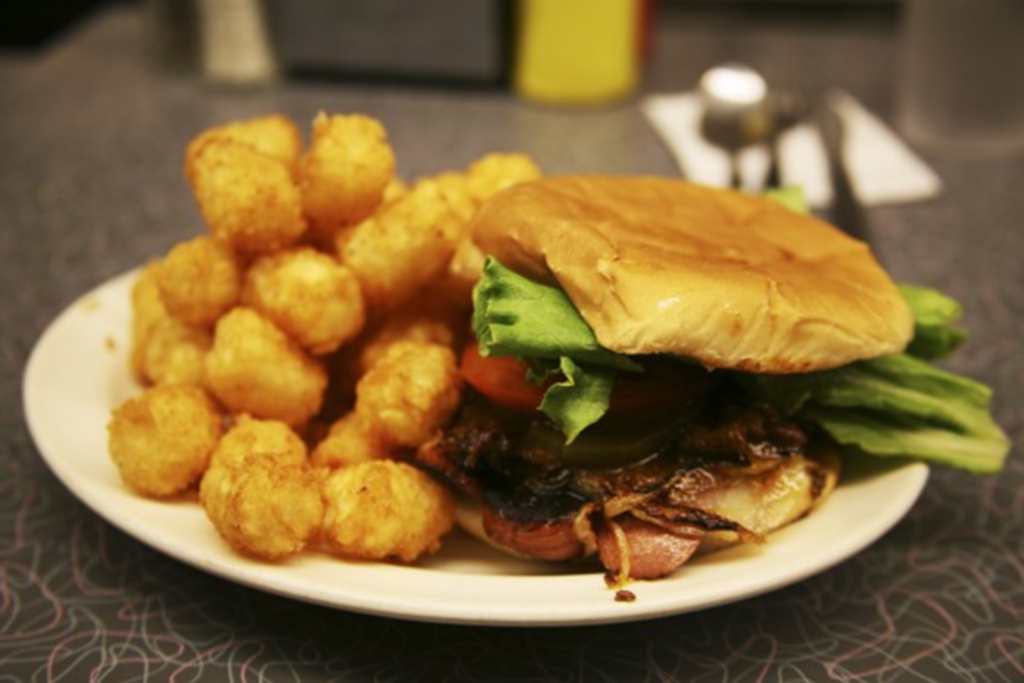 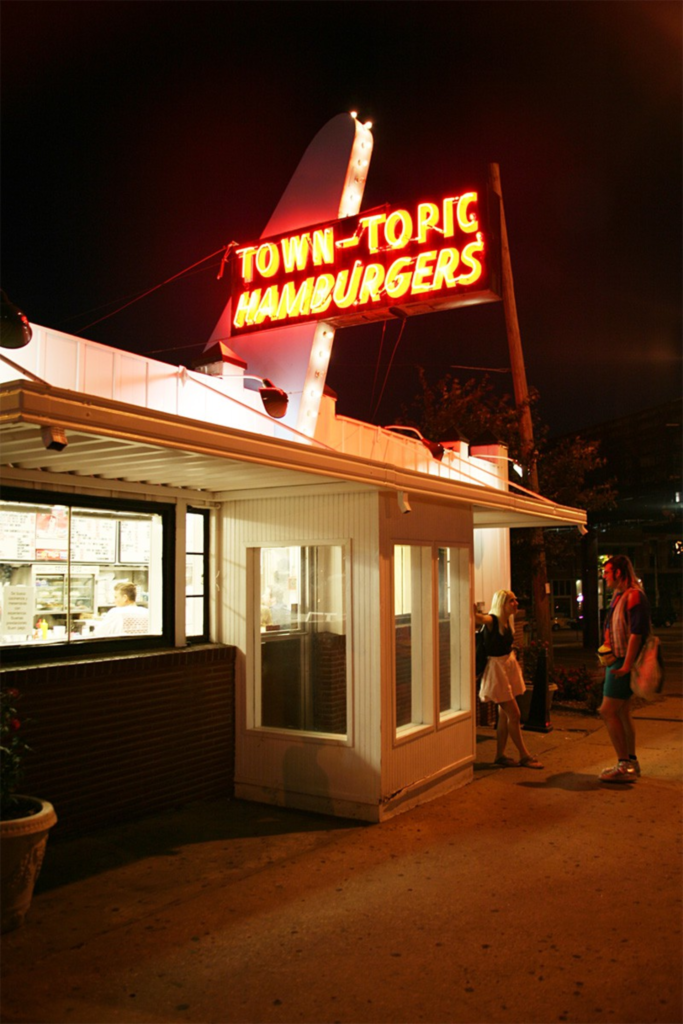 As far as Shirley Miller is concerned, summer vacation has already begun. Shirley knows this because the college kids from the University of Kansas have been driving to Kansas City more frequently, drinking too much at the bars in the Power & Light District, and stopping in for breakfast at her place of employment — the Town Topic on Broadway — before heading back to Lawrence.

“You know they’re KU kids because they talk about Lawrence,” Miller says as she wipes down the counter with a damp dishcloth. “And when you see a lot more of them, you know the school year must be over.”

Miller has worked behind the counter at the oldest of the city’s three Town Topics, the one at 2021 Broadway, since 1970. That was long before anyone ever called this neighborhood the Crossroads. Her current shift is 8 p.m. to 5 a.m., so she and David White, the cook at the flattop to the left of the narrow room, get a lot of raucous customers unwinding after boozy evenings. Hot meals and strong cups of coffee calm the after-bar crowd, which is usually gone by 4 a.m. when the night-shift workers come in for coffee and conversation about the morning’s news.

“Let’s face it,” says a tattooed woman, in a purple tank top, early one recent Tuesday. “It’s all over for the Gulf Coast. It will never be the same again.”

The short, elderly man to her right is reading off the day’s disturbing headlines. Every new story brings a volley of opinions, from her or a dapper gentleman in a hat sitting on the other side of the man reading the paper.

Sometimes White chimes in, but not Miller. Unsmiling, she watches everything going on in the 12-stool diner. After 40 years, Miller guards this joint like a lioness.

“I’m pretty sure she’s the one who kicked my friend Trixie out of there one night,” says my friend Franklin. He enjoys telling the story of a very drunk Trixie, who overheard one of the other customers whispering to a companion that he wondered whether Trixie was a man or a woman. Trixie took offense, Franklin says, and got up from her stool and lifted her Indian-print skirt so that everyone in the room could see that she wasn’t wearing underwear.

“I think Trixie was banned for life for that,” Franklin says.

That kind of behavior sounds more in keeping with another, much wilder all-night spot: the original Sanderson’s Diner at 104 East Eighth Street. Sanderson’s had been around for 25 years when Claude Sparks opened the first of his Town Topic burger stands at 24th Street and Broadway in 1937. That location is long gone, as is Sanderson’s, which was so old that it wasn’t required to have a bathroom on the premises — and didn’t; many customers, male and female, peed in the alley.

Those were the days when Baltimore and Broadway boasted at least a dozen hotels, all with cocktail lounges and saloons, and downtown was full of all-night diners. “After drinking all night, people got hungry,” remembers 89-year-old radio personality Walt Bodine. That explains why downtown’s two Town Topics are only a block from each other: The locations were good.

Besides having a restroom, the Broadway Town Topic also has a “Mary Shelley’s Frankenstein” pinball machine in one corner and, in a rare nod to the 21st century, an Internet jukebox in the other. On the Tuesday morning that I stop in for breakfast at 4 a.m., after a sober but sleepless night, I think about paying for some tunes. But what sounds soothing at that hour? Kenny Chesney? Styx? Queen? Dean Martin? I opt for silence.

It isn’t total silence, of course. An electric fan buzzes, bacon sizzles on the grill, and patrons banter. A man in a yellow T-shirt tells White about a relative who worked at a country club and found a big bill on the sink in the men’s room. Was it $1,000? I don’t catch the payoff because Miller puts my breakfast in front of me: a cheese omelet with hash browns, a rasher of bacon and buttered white toast. “You want hot sauce?” she asks. Not at 4 a.m., thank you.

What I want — really want — is a half-order of biscuits and gravy, but that dish is only available after 5 a.m.

The Broadway Town Topic is the only one still open 24 hours; it’s open every day, even holidays — but only for select hours during Christmas and Thanksgiving — while the one around the corner on Baltimore closes at 7 p.m. and isn’t open on Sundays.

Each Town Topic has a slightly different personality. Both of the downtown Topics serve Golden Boy pies, which are just as delicious with breakfast as they are with a double cheeseburger. (A couple of local websites insist that the pies are made by a woman who works at Town Topic — not true.) The selection on this Tuesday morning includes lemon, pecan, cherry, coconut, chocolate-cream, apple-banana and Key lime. I eat chocolate.

I would have eaten pie again at a recent lunch, but the 22-year-old Johnson County loca­tion doesn’t serve pies — or tater tots — for some reason. However, it does serve something called “chili dip,” a small serving of the house chili, for customers who want to spoon it on a sandwich or dip fries into it. (All of the Town Topics serve a signature chili, a highly seasoned, dark concoction with lots of ground beef.)

This Mission venue was originally called Whopper Burgers, according to the woman behind the counter, “but they got into it with Burger King,” she says. It’s bigger than the other two and looks like a more conventional diner, with 10 stools and eight tables. Customers order at the counter and take a number after paying their tabs. When the food is ready, one of the staff calls out the number, and the sandwiches — burgers, patty melts, pork tenderloins, Coney dogs, BLTs — are served up in plastic-mesh baskets. (At the downtown diners, everything is still served on china plates.)

“You can’t beat that deal,” says my friend Truman, who orders a hamburger and onion rings. He points to an odd-looking metal box, with a slot, embedded in the wall near the door. “What’s that?” he asks the woman behind the counter.

“It used to be the safe,” she says. “You want lettuce and tomato on that burger?”

Truman thinks the burger and onion rings are great, and Bob likes the chili. I have my favorite Town Topic lunch: a patty melt with extra grilled onions and fries.

There’s a big, shiny jukebox in this restaurant, too. Not the Internet variety but one with the same eclectic mix of music, including the Greatest Hits of Billy Idol, which entices one customer to pay for “White Wedding.”

“Who would want to hear that?” Truman complains.

It doesn’t bother me at all. After noon, everything sounds good with a patty melt.