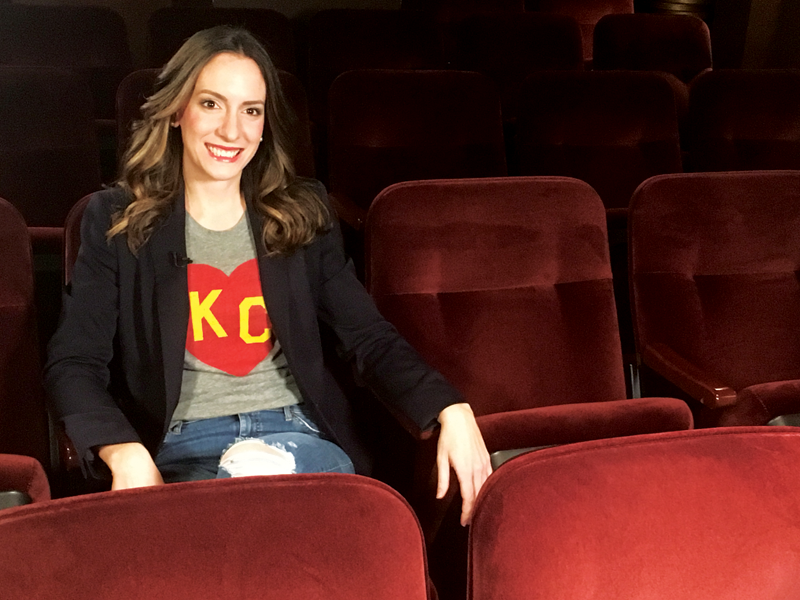 What I do (in 140 characters or less): In my free time I inspire people to travel to places where movies were filmed, and at my real job I get people excited to visit Hotel Phillips.

What’s your game? Keeping up with my email inbox.

What’s your drink? Whipped Vodka. It literally goes with everything. Mix it with root beer, orange soda, Coke, Pepsi, lime juice or even apple cider. It all tastes good.

What’s on your KC postcard? Union Station. I love bringing friends and family who visit me to Union Station. The building is gorgeous, it has a storied history, was featured in several movies, and there is always something going on. I once ate brunch with my mom on the terrace at Harvey’s while Tech N9ne just happened to be recording a music video in the lobby.

Finish these sentences: “Kansas City got it right when …” They built the streetcar. It’s a really good thing for people who come in town for conventions because it links a lot of hotel rooms, restaurants and attractions, making it easier for KC to show off.

“Kansas City screwed up when …” They didn’t develop the riverfront. It’s such a natural thing the city hasn’t taken advantage of.

“Kansas City needs …” The world to know about it. Seriously, when I moved here from Michigan, I had absolutely no idea what to expect. Every time a friend from out of town comes to visit me, they are always pleasantly surprised. It truly is a hidden gem.

“As a kid, I wanted to be …” I changed about 18 times, but I do remember as a kid I used to always create workout videos of myself as the instructor, as well as fake newscasts with my little brother. Later on, any time I had a school project with a video option, I was all over it. My eighth-grade Uranus video was pretty amazing and full of Uranus jokes.

“In five years, I’ll be …” Hosting and producing my own nationally syndicated TV show, Movie Trip. That’s the goal.

“I always laugh at …” Phil Dunphy on Modern Family.

“I’ve been known to binge watch …” Silicon Valley, Sex and the City, Narcos, and basically anything on HGTV. I’ve seen so much Flip or Flop, Love It or List It and Property Brothers, I almost feel like I want to flip a house myself.

“My dream concert lineup is …” Macklemore (saw him at the free show in Power & Light, and that might be my favorite concert of all time). Monster Ball-era Lady Gaga. Michael Jackson would have been badass.

What’s your hidden talent? I can throw a javelin over 40 meters. Did it in college at Michigan State — yep, I was on the track team.

What’s your guiltiest pleasure? Hitting the snooze button 18 times every morning before I wake up. Sleeping is my second-favorite hobby. Favorite hobby is actually designing myself elaborate Halloween costumes each year. I’m an experimental sewer.

The best advice I ever got: My sister once told me people have many sides to them. Nobody is ever all good or all bad, and I’ve found that to be very true.

Worst advice? Go ahead, get one more drink. It’s a good thing all the Snapchats of me dancing obnoxiously have faded away.

My sidekick? My phone

Who is your hero? My parents. They exposed me to the world. They felt travel was important and encouraged me to explore.

Who (or what) is your nemesis? Time. I have none of it.

My dating triumph/tragedy: I had the best Valentine’s Day date ever. My date took me to, like, three places throughout the night and kept each location a surprise.

My brush with fame: Because of Movie Trip, I interview famous people about their experiences on location. One of my favorites was Selena Gomez. We had a great time in Miami. I had always heard she was a really down-to-earth person, and it’s true.

My soapbox: A feminist is someone who wants equal rights for both men and women, not someone who hates men.

What was the last thing you had to apologize for? Nothing. I never mess up …

Who’s sorry now? They know who they are.

My recent triumph: Producing the African American Film Critics Association annual awards show in Los Angeles this year. Can’t believe I actually got to write a script that a bunch of famous people will read onstage.

The Movie Trip Awards will be held at 7 p.m. Wednesday, February 22, at Screenland Tapcade. The event celebrates 2016 movies that inspired people to travel. Vote here.