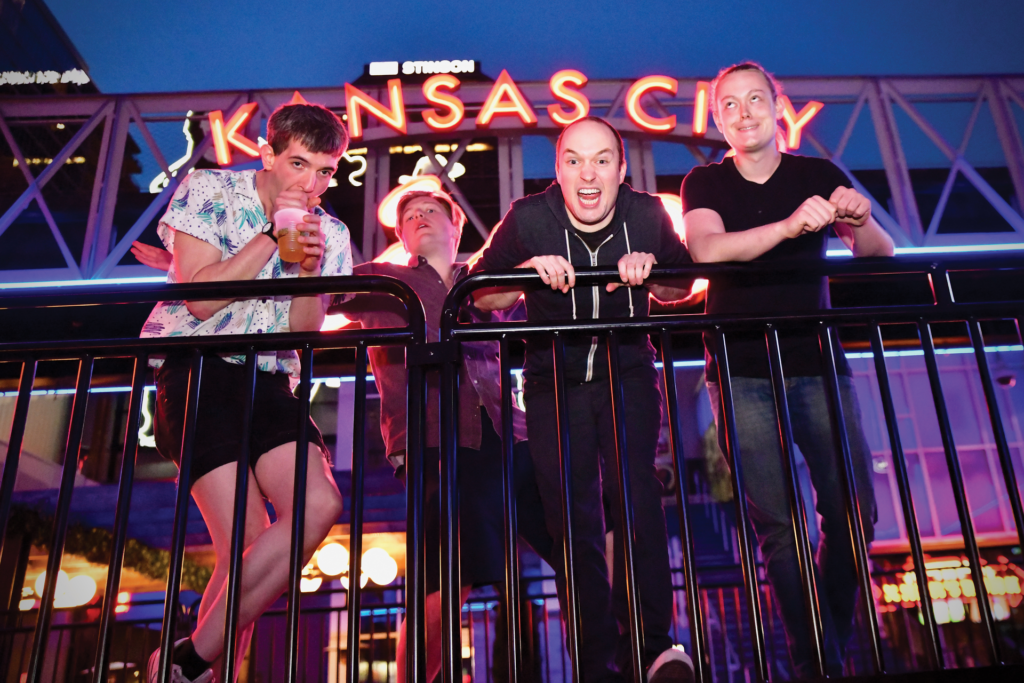 Salty is the best band in Kansas City, according to Jonathan Brokaw, the guitarist and singer of the garage-punk-with-synth band (don’t call them synth punk!) Salty. Brokaw is also the de facto head of the group’s tongue-in-cheek propaganda wing. Follow along on his Facebook timeline, and between Royals rants and kitchen-work kvetching, you can frequently find Brokaw singing the praises of his own group.

These commendations range from basic (“Salty is a good band,” he posited on an event page in September 2017) to bombastic (a July 2018 tour announcement touted Salty as “America’s most important and influential band, and the likely forebearers of a future global utopia”). Whether you agree with these sentiments or not, Brokaw’s persistent Facebook presence is undeniably more entertaining than a majority of the web content generated by the city’s punk and DIY musicians. Once he’s done urging his friends to catch the band live or listen to its new album, Brokaw is apt to crack his knuckles and punch out a thoughtful status reflecting on the struggles of being in an independent band, his vision for the city and its music scene, and, on darker days, the absolute futility of those things.

On a cool, overcast evening in early April, the members of Salty — Brokaw, Zach Turner (synths), Jesslay Laycock (bass), Ethan Eckert (drums) — and I piled into a compact SUV with an iffy set of brakes and hurtled toward the heart of the beast: Guy Fieri’s Dive & Taco Joint in the Power & Light District.

Salty is a band that embraces absurdist culinary humor whenever possible, so Guy’s seemed like the ideal venue to learn more about what makes one of KC’s most enigmatic bands tick. Inside the restaurant, a white man with dreadlocks performed Stealers Wheel’s “Stuck in the Middle with You” as we placed our orders and lounged under a bizarre cluster of birdhouses that hung from the ceiling. We eventually took our food and drinks to the P&L’s central courtyard area, where Dave Matthews and Foo Fighters songs blasted over the loudspeakers.

Salty started out under a different name: Lil Toughies. Brokaw and Turner had played together in a band called All Blood and wanted to regroup for a new project. Eventually, programming the drum machine became too taxing — “It was like playing Battletoads every night,” Turner says — so they recruited Eckert to play drums. His snare, hi-hat, and toms move from show to show; he says it’s the only way to keep things fresh. “I was hired to be a machine,” Eckert says. “I figured I would need a little more symmetry to replicate the rigid aspect of the machine, so I started moving things.”

By early 2017, the band had added Laycock on bass and changed its name to Salty. Preservation Blues, the group’s first album, was released that year, and the reviews came pouring in! Actually, they didn’t. Despite having an almost-bottomless well of wonky, Midwestern basement rock charm, Preservation Blues flew under the radar of almost everyone besides the city’s miniscule population of DIY music obsessives and dive-bar regulars.

The group’s sophomore effort, Dry Rub, is likely too weird to be rocketing to the top of the Billboard Independent Albums chart any time soon, but the attention it has received since its late March release has already eclipsed that of the previous record. Funds were pooled, and Salty traded in its ultra lo-fi, mics-hanging-from-the-ceiling production arrangement for some time at Weights and Measures Soundlab with Duane Trower.

“I’ve been doing lo-fi stuff for fuckin’ ever,” Brokaw says, “And I just wanted to finally have something that was studio-recorded if for no other reason than if I died tomorrow, at least I did something in the studio before I died.”

Many DIY rock snobs snub their noses at formal studio recordings, but the band agrees that the recording of Dry Rub felt more organic than another basement job likely would have. They credit that to the fact that the studio had enough microphones for the band to simply plug in and play most of the tracks live on the recordings. Many of the textures and grooves on Dry Rub are indebted to the garage rock, punk, and new wave of the seventies, but their frantic and delightfully off-kilter execution is a mutation that feels distinctive to Salty, and that execution has never sounded cleaner.

Brokaw’s lyrics have long come with a paranoid, fatalistic slant, and there have always been clever references just for the Kansas Citians listening. “High Tension,” which appeared on Preservation and the sole Lil Toughies EP, nods to one of the downtown skyline’s most popular signs as a bit of tension envelopes his outlook. The allusions to local landmarks and culture are slightly less subtle on Dry Rub, but no less enjoyable. 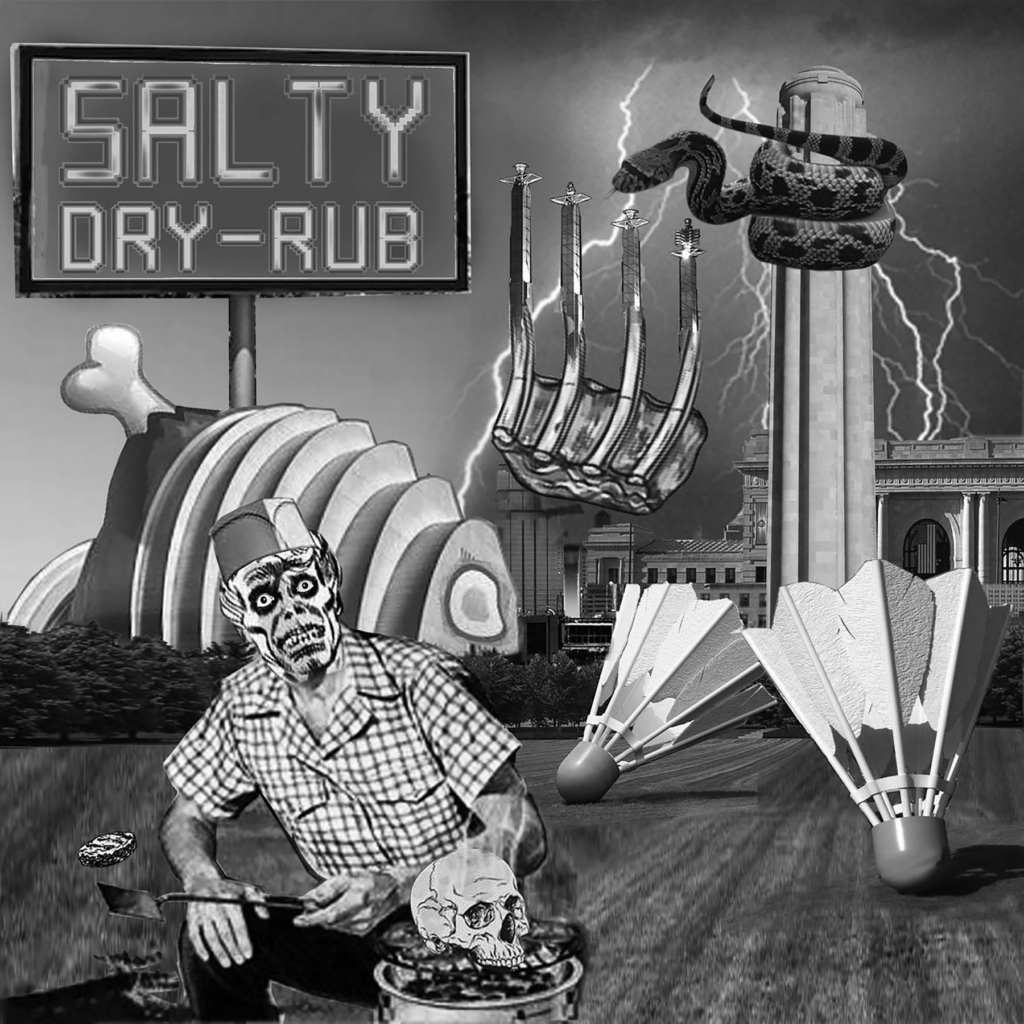 William Willmott’s album artwork turns the Kauffman Center’s concrete ridges into an enormous bone-in ham; the Bartle Hall pylons become a rack of ribs; and a fry cook grills a human skull on the Nelson-Atkins Museum of Art’s lawn. The record’s title track is a mid-pace march that nods to the annual, collective hiss that midtown service industry workers let out as the Kansas City Marathon slows their commute. The song sends barbs flying at the marathon organizers, bandwagon Royals fans, and luxury condo owners crowding the city. But it also raises the question of who the condo pushers are pushing out.

“That whole song is straight-up about Johnson County-ites coming into Kansas City and deciding now that it’s hip enough for them to fuckin’ make it their own playground,” Brokaw says. Eckert interjects, clarifying that it’s more about the city now feeling “safe enough” in the eyes of suburbanites.

The rest of the album finds Salty chiming in on today’s intergenerational conflicts, taking jabs at the “moral McCarthyism” and social climbing that PC culture often spawns. There’s even a cover of Guided by Voices’ “Motor Away” — appropriate, given that Robert Pollard was also a frustrated Midwesterner writing about escaping the alienation and isolation he felt at home.

Indeed, a healthy portion of my conversation with Salty’s members was spent teasing out the pathologies of Midwestern attitudes in regard to civics and the arts. There’s the protestant stoicism, the fair-weather fandom, the deeply ingrained drinking culture. What mix of these elements, and others, makes Kansas City an often-frustrating place to live? What is keeping more people from caring about Salty, the self-proclaimed best band in Kansas City? We couldn’t figure it out. Let us know if you can.

Dry Rub closes dramatically with “Prairie Empire,” a song whose anguished refrain — “ready mix concrete” — is a reference to the construction company owned by Tom Pendergast, the old Kansas City political boss from the 1930s. Pendergast’s powerful and corrupt machine earned his company contracts building inner-city high schools, Municipal Auditorium, and the Power & Light Building, which loomed above us in the night sky as we sat eating our corporate tacos. Kansas City. The album concludes with Brokaw’s panicked cries: “Crumble alone!” he bellows, a warning to the rest of us that Pendergast’s concrete won’t last forever.

Dry Rub is available now on Bandcamp and on CD via What’s For Breakfast? Records.