There’s a lot to chew on at the Speakeasy 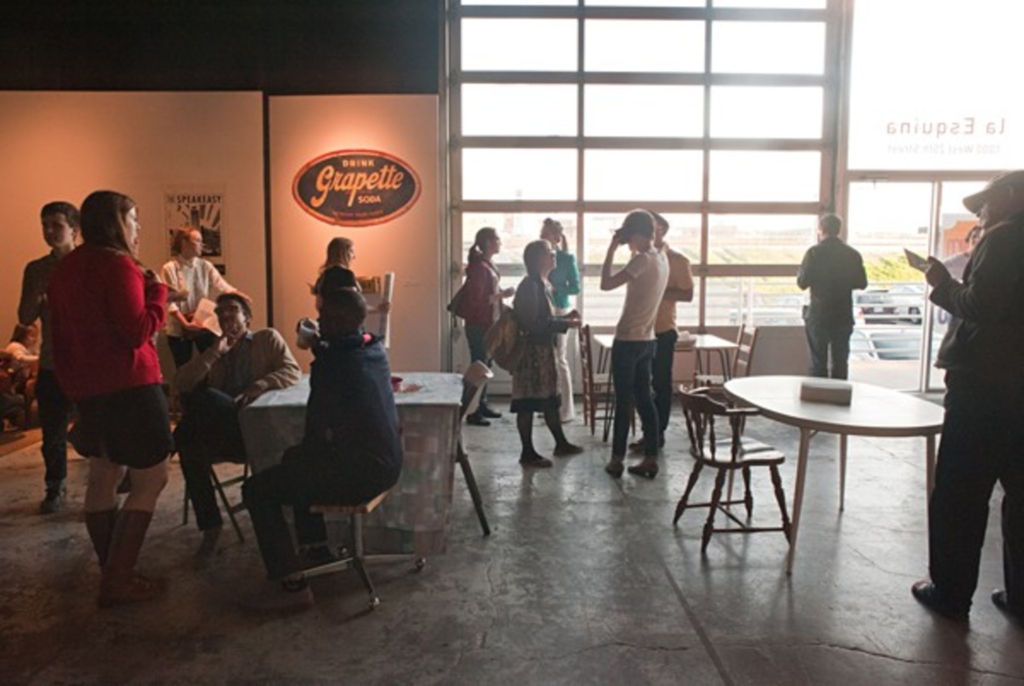 Sean Starowitz picks up a stack of metal chairs and begins to lug them across the concrete floor of the H&R Block Artspace’s upper gallery.

“Art spaces are way behind,” Starowitz says as he heads toward the elevator. “Laundromats, restaurants and bars are way ahead in facilitating culture. Why do we keep inheriting these models if we know they are flawed?”

It’s a Sunday afternoon, two hours before this month’s installation of Bread KC gets under way. For $10, guests enjoy a meal together and watch the presentations of three competing artists. After a vote, the winner takes home a micro grant funded through proceeds from the dinner.

Starowitz and his partner, Andrew Erdrich, have put on these Bread KC dinners almost monthly since October 2010. The two artists, accompanied by Erin Olm-Shipman, who joined the Bread KC team in February, descend with the precision and speed of a professional event staff, unloading a sheet cake, boxes of serving ware, loaves of bread and a warm stockpot from the back of a pickup. They’ve held each dinner at a different location — typically one of the art spaces that Starowitz believes to be outmoded, sometimes a restaurant or a bar.

At some point, Starowitz, Erdrich and Olm-Shipman began to wonder what it would be like to have a dedicated Bread KC space. That curiosity has evolved into the Speakeasy, an exhibition at the Charlotte Street Foundation’s La Esquina gallery. And for the Speakeasy’s five-week run, the gallery has more in common with a restaurant or a bar — or with a laundromat — than with a traditional visual-art venue like the Artspace.

So La Esquina, a cavernous white-walled and concrete-floored space just off Southwest Boulevard, now has the homey, well-worn feel of a small neighborhood gathering spot — like a Y.J.’s Snack Bar or a One More Cup. Mismatched thrift-store tables and chairs dot most of the gallery space. There’s a bookshelf in one corner, stocked with art-heavy selections, such as The Art of Seeing (by Aldous Huxley) and Art in Theory: 1900-2000 (by Charles Harrison and Paul Wood). A counter occupies the opposite corner, looking like where you pick up coffee or order a pound of ham.

It won’t stay the same for long. The goal is a shape-shifting dynamism, a space that changes all month to keep people coming back throughout the run of the exhibition.

“We’re hoping if we have this calendar of events, we’ll have regulars coming in, and they’ll be exposed to everyday cultural activity they may not be aware of,” Erdrich explains.

The slate is ambitious, with days full of concerts, readings, workshops and visual-art exhibitions. On Saturday evenings, for example, the Speakeasy transforms into a music venue, with concerts by local bands. Element Studios, located around the corner, is recording all the shows and posting the music on the Speakeasy blog.

The project is also a broader, bigger projection of Bread KC’s cultural radar.

Nicholas Naughton used money from a grant he won in June 2010 to start La Cucaracha Press. (And he hasn’t missed a Bread KC dinner since.) Naughton teaches a printmaking class at the Kansas City Art Institute. He and his students formed a collective called Phresh Prints and hand-printed nearly 2,000 letterpress postcards for the exhibition.

“We’ll do posters, aprons, membership cards, custom invitations and anything else the show needs,” Naughton says.

The third rail powering Speakeasy’s ambitious range is its unspoken challenge to viewers (and, to some degree, its participants): What is art, anyway? The exhibition as a whole doesn’t set out to answer that question, but if you listen to the back-and-forth of the creators involved, you might hear one anyway. As the project’s essay puts it: “Artists are developing creative strategies to expand conversations beyond the notion of ‘shooting the breeze’ and into direct participation and collaboration. Today, conversation can be seen as an affective and compelling artistic medium.”

Among the voices: Jordan Stempleman, who reads from his new book of poetry, No, Not Today during the Speakeasy’s Reading Night Brouhaha, at 7:30 p.m. Friday, April 27. Stempleman, who teaches creative writing at the Kansas City Art Institute, is interested in this intersection of literary and visual arts.

“On a localized level, I believe in the community cross-pollination and building that occurs when artists from different disciplines display their dialogues in the form of collaboration,” he says. “Roots develop. Care intensifies. The family extends.”

Also on the agenda are weekly exchanges, a kind of reverse panel discussion where the experts are prepared to ask questions of audience members. Topic No. 1 is money — no surprise, considering Bread KC’s fundraising and distribution platform. The Saturday, April 6, discussion centered on creative labor, with future panels covering philanthropy, and the pros and cons of nonprofit organizational structure.

Chicago artist and food-truck proprietor Eric May participated in that first panel discussion. He tells The Pitch: “Creative cultural workers are starting to re-evaluate the power structures that surround the art world and this idea of the creative class, and how we will find a sustainable economic model for ourselves. Basic capitalism can be a model for reimagining the career possibilities for people in the arts. It repositions the creative practice within the broader economy.”

Curators Starowitz and Erdrich have also designed the Speakeasy as an opportunity for culinary cross-pollination.

On the Speakeasy’s opening night, First Friday crowds in La Esquina’s parking lot tasted platters of Kansas City- and Chicago-style barbecue from May’s E-Dogz food truck. (The Windy City may be better known for its pizza, but it has a distinct style of barbecue, with emphasis on spicy sausage.)

Jenny Vergara, one of the masterminds behind the Vagabond pop-up restaurant, says, “When I first met Sean Starowitz and Andrew Erdrich — aka the Bread Boys — I was impressed with their heartfelt interest in bringing the food and art scenes in KC together through their various art projects.” She has lent cookware to Bread KC in the past; for the Speakeasy, she presents work with Tony Glamcevski of Green Dirt Farm and food photographer Paul Ingold, at 6 p.m. Sunday, April 22.

Ingold is looking forward to showing his images to a new audience. “The Speakeasy exhibition is exposing my work to artists and beyond my foodie following,” he says.

With Coffee and Toast, the Bread KC-rooted Speakeasy has a Bread KC-like component of its own. On Sundays, visitors to the gallery watch YouTube videos of artist presentations and put cash in jars to support their favorite project.

Like Naughton of La Cucaracha Press, or Rogers of CartWheel, maybe the artists highlighted this month will pay it forward. Regardless, they’re making food for thought for anyone who wants to hang out.