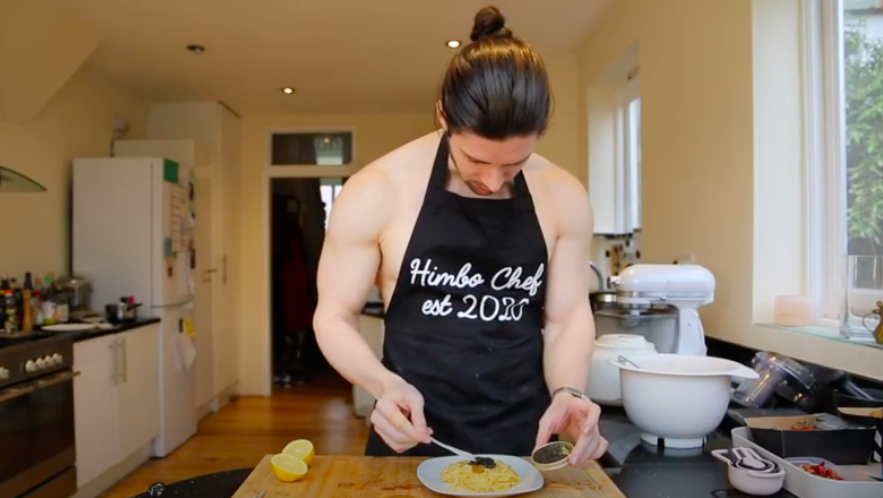 Adam plating the uni pasta with caviar. // Courtesy of The Himbo Chef

Adam Fisher, a powerlifter and fitness coach, recently started a YouTube project with his video game designer wife Elizabeth. The project, or rather The Himbo Project, consists of Adam attempting (and often failing in funny ways) to make dishes while Elizabeth challenges him to recipes, guides him, makes fun of him, and generally offers support.

The couple moved around the United States frequently and then moved to Copenhagen in 2016. After that job, they moved to London for Elizabeth’s career. Fisher said that London has been great because the family loves living in Europe and their kids are thriving in the U.K. However, there comes a downside to being an ex-pat living abroad—especially during COVID-19.

“The problem is that when you’re living in a foreign country you feel a bit isolated and like you don’t have those connections to your family and your friends that you’re used to,” Fisher says. I think it’s just the worst time on top of that to have a pandemic and to be shutting doors all the time and feeling extra isolated. I haven’t seen my parents, I haven’t been back to the states in over a year. It does weigh on you a bit heavily.”

The project began, Adam said, as the ultimate lockdown hobby. Whereas Elizabeth has a vast knowledge of cooking and specific ingredients, Adam was a mistake-prone beginner. His desire to learn how to cook and his love of fitness came together to create Himbo Chef. He began with an attempt at French onion soup and has done such projects as homemade pasta, fried chicken, and cassoulet. Perhaps his weirdest concoction was a beef wellington. But not just any beef wellington—a SPAM wellington made with pumpkin spiced SPAM just in time for Thanksgiving. Surprisingly, Fisher liked the SPAM creation and has all of us at home wondering if we should fork out the money for the illustrious pumpkin spice SPAM to make some ourselves.

In each video, Elizabeth introduces a blindfolded Adam to the ingredients and has him guess what dish they’re going to make. Once the ingredients are confirmed and Adam knows what the dish will be, he gets to cooking (or trying to, at least).

“My wife and I have always had this ongoing joke about how I don’t know anything about cooking,” Fisher says. “And then lockdown happened, and we’re not going out anymore, we can’t go to a nice restaurant periodically for Valentine’s Day, for example, so how can we channel that energy? And the answer was Himbo Chef. So the idea was I’ll do some nice cooking, we’ll film it and have a bit of fun. It’s a nice way to a. spend time together and b. Make something nice to eat periodically and then, of course, c. something where we could share it with other people and have a bit of a laugh out of it and have some fun as well.”

Since the advent of the videos, though, Fisher’s cooking skills have improved with every video he does. Those instincts have certainly helped him in the kitchen, but not necessarily in his role as a himbo.

“That’s actually something where my wife Elizabeth is very mad at me because it makes it slightly less funny,” Fisher said. “Elizabeth was like, ‘I can’t believe it, you’ve gotten too good. You’re anticipating the things that might go wrong.’ So we don’t have some of the same spectacular failures.”

In learning how to cook, Fisher says he’s become almost grossed-out by certain dishes, including eggs in general. In a video aptly titled “These eggs are CURSED,” Fisher made eggs with Anna G. Hughes, who spent lockdown making unsettling renditions of eggs. Fisher went into the video hating eggs but came out even more disgusted.

“I’m absolutely disgusted with how much use you can get out of eggs, flour, milk, and sugar. I’m always really upset when I discover that something is just a new combination of those four ingredients that I didn’t know about—which is very common,” says Fisher.

Most recently, the Himbo Chef did a Valentine’s Day video where he made uni (sea urchin roe) pasta with caviar. After a few mistakes—including getting cut by a tiny wisk while making muscle poses—Adam’s dish turned out beautifully. Thanks to Elizabeth’s guidance, and a little chef intuition of his own, they had a beautiful Valentine’s Day dish. This pasta dish went a lot better than one of Fisher’s earlier videos, “Homemade Pasta Fail,” demonstrating his culinary growth.

Fisher says that the channel is still in its early stages, but already has a growing amount of dedicated supporters. Since June of 2020, the Himbo Chef has created 23 videos and has no plans of stopping soon. In creating the Himbo Chef persona, Fisher says it wasn’t that far removed from his normal personality.

“In part, it’s a bit of just who I am,” Fisher says. “In part, it’s also a defense against a crappier person that I used to be. I used to be very full of myself, in that I was very self-important, and in my younger days, I offended a lot of people and was kind of a crappy person in a lot of interpersonal relationships because I took myself way too seriously. So being able to be proud that I have this personality out there that’s both kind of me, kind of a bit exaggerated, but it’s very freeing. I’m able to be proud of that side of myself without having to be super serious all the time and self-critical.”

For more Himbo Chef content, subscribe to their YouTube channel so you can see for yourself all of Fisher’s successes and failures. You can also support the couple via their Patreon if you consider yourself a Himbo superfan.