The Year in Film: On Deck 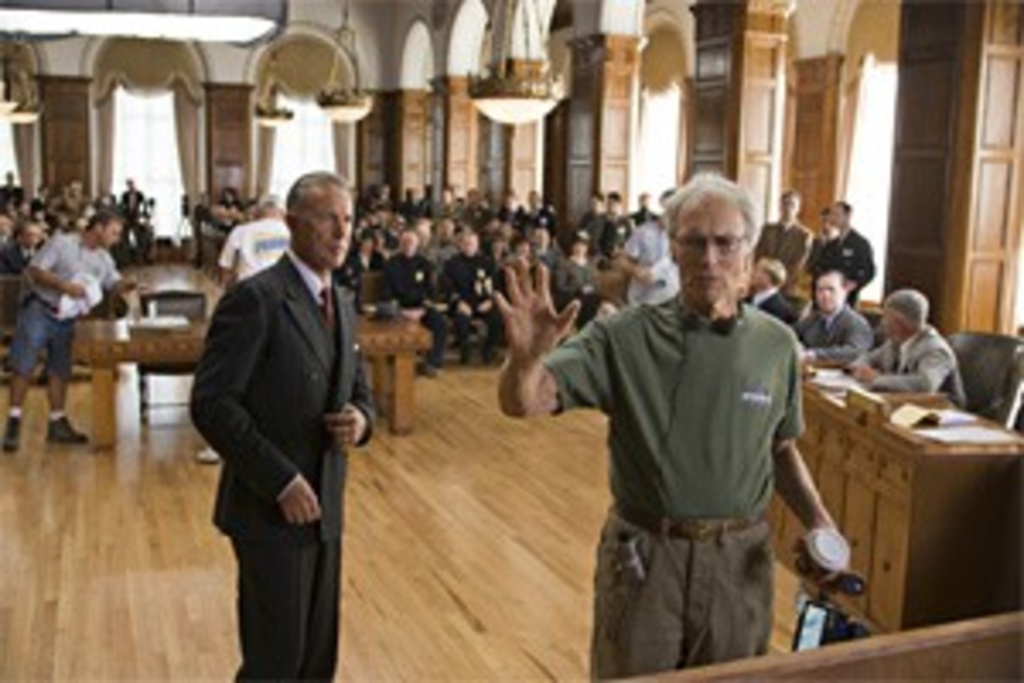 The first thing you notice when you walk onto the set is the number of extras (300) in late-1920s period costume. The second thing you notice is how completely quiet the place is. No production assistants madly rushing about. No ringing bells. If you didn’t know better, you’d swear they weren’t shooting a big Hollywood movie here.

And yet, they are. It’s called Changeling, and it’s the 28th movie directed by Clint Eastwood. The first time I interviewed Eastwood, in 2004, he discussed his preference for calm and order during production. He had once attended a White House dinner, he said, and taken notice of the barely audible two-way radios used by Secret Service agents. Why, he wondered, couldn’t that technology be imported to a movie set, to cut down on the incessant screeching and squawking of open walkie-talkies? And so he did just that. Still, to hear Eastwood describe his process is one thing; to see it applied is something else entirely.

It’s mid-November, halfway through Changeling‘s 35-day shoot, and an upstairs ballroom of the former Park Plaza Hotel on Wilshire Boulevard has been transformed by production designer James Murakami into an elaborate replica of the Los Angeles City Council chambers. It’s there that a woman named Christine Collins sued the city for damages after her 9-year-old son, Walter, was kidnapped and a shrewd runaway named Arthur Hutchins Jr. was returned to her in his place. When Collins protested that the boy was not her real son, a police captain, J.J. Jones, had her committed to the psychopathic ward of a hospital.

The story is true. Screenwriter J. Michael Straczynski has changed none of the names. The movie includes a wellspring of fascinating but largely forgotten figures from the city’s past, including firebrand Presbyterian evangelist Gustav Briegleb, who helped rally the public behind Collins, and flamboyant defense lawyer Sammy “S.S.” Hahn, who in 1957 tied two concrete bricks around his neck and drowned himself in the deep end of a Tick Canyon swimming pool.

The extras file into the courtroom set with the hushed decorum of parishioners at Sunday Mass. Then the film’s stars, Angelina Jolie (who plays Collins) and John Malkovich (who plays Briegleb), take their front-and-center seats.

After conferring briefly with the actors, Eastwood tells the crew, “Let’s do this and see how it goes.” When the shot is over, Eastwood mutters a barely audible “stop” — cut being a word, like action, that he avoids at all costs. And with that, the crew begins to prepare the next setup. There is no pause for playback, a ritual on most film sets in which the director watches the take back on a video monitor to see if he or she is happy with it. Instead, Eastwood and his cinematographer, Tom Stern, have handheld wireless video monitors at their disposal that allow them to watch a live feed of a given shot when the cameras are rolling. But as I observe Eastwood, I see that his gaze is usually fixed intently on the actors.

All this, too, is part of the Eastwood mythology. He is famous for putting his trust in first (or, at most, second) takes, for sometimes shooting (and using in the finished film) what the actors think is merely a rehearsal, and for moving from A to B with a speed that belies his 77 years.

“I thought this was going to be one of the most difficult things I’ve ever done, given the subject matter, but instead it’s been the easiest,” Jolie tells me. It’s now early December, one week before shooting wraps, and the production has arrived at the climactic scene in which Collins confronts convicted killer Gordon Northcott in his prison cell on the eve of his execution. It’s a physically and emotionally draining sequence, during which Jolie must push actor Jason Butler Harner against a wall and repeatedly ask, “Did you kill my son?” It is, Jolie says, her “big Stella Dallas moment.”

This turns out to be, by Eastwood standards, a long day, which means that instead of wrapping at 4 in the afternoon, shooting drags on until 6. At one point, I venture across the lot to the film’s post-production suite, where editor Joel Cox shows me his cut of the courtroom scene. When I return, Eastwood is prepping the last shot of the day. I tell him I like what I’ve seen and look forward to seeing how it all turns out. He shoots me his deadpan, squinty gaze and says, his voice just this side of a whisper, “I look forward to seeing how it turns out myself.”