The Wolves, at the Unicorn, explores the ties that bind — or don’t 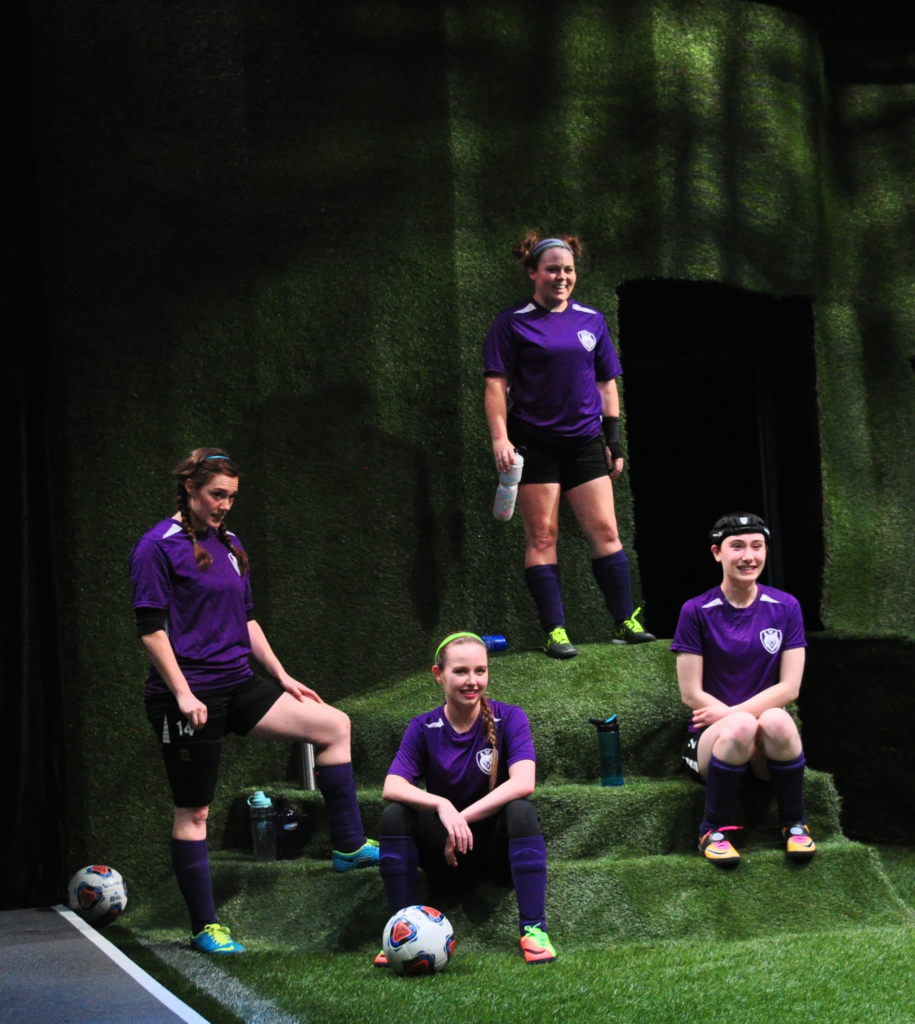 Nine high school girls make up the soccer team that is The Wolves, at the Unicorn Theatre. During their weekly pregame warm-up sessions, we become acquainted with them amid a cacophony of their competing voices, opinions, and personalities.

They’re a typical bunch of active, intelligent, hopeful and sometimes naïve girls-almost-women. Thrown together every Saturday morning, they banter, they quarrel, they compete, they insult, they reconcile (or try to). Playwright Sarah DeLappe captures their essence well — “That’s exactly what they sound like,” a high school teacher told me.

Directed by Heidi Van, The Wolves is this year’s Unicorn alternative to the plethora of Christmas shows pervading entertainment venues every December. The play was a 2017 Pulitzer Prize finalist and has been well-received, including a production at New York’s Lincoln Center in 2016. It’s a new play, by an upcoming playwright.

So I had to wonder: What was my problem?

Soccer is what brings these team members together, or sometimes pulls them apart, and drives them most of all. (The stage, set on the floor, is covered with AstroTurf, with audience seats rising up, like bleachers, on either side; design by Christian Taylor.) DeLappe paints individual portraits as well as a group picture, but this 90-minute one-act lost its footing about halfway through, its pace and timing too slow-mo.

It’s an ensemble piece, and the actors do good work. Carla Noack, portraying a late-appearing character with brief stage time, gives an outstanding performance. The Wolves — the word develops a deeper meaning — explores ethical choices, cultural insensitivities or ignorance, the juxtaposition of the promise of liberty to the realities of modern life. DeLappe does this, often with humor, through a continual barrage of (sometimes overlapping) adolescent dialogue as the girls do exercises and go through their paces.

The play offers some witty observations and well-drawn characters, but a collective experience, which occurs late in the play, comes off as a tired, even shallow, plot device to move the play toward its resolution. And, for me, the script renders no fresh insights or new perspective. Nothing feels particularly different about the lives of these 21st-century teenagers from girls of previous decades.

Perhaps it doesn’t have to. (Members of my own party came away from the show with a variance of opinion.) And to be fair, I do find myself still thinking about these teenagers. I feel for their personal struggles to find their way in their community and in the world. Most of all, I feel grateful that I’m no longer a teenage girl.