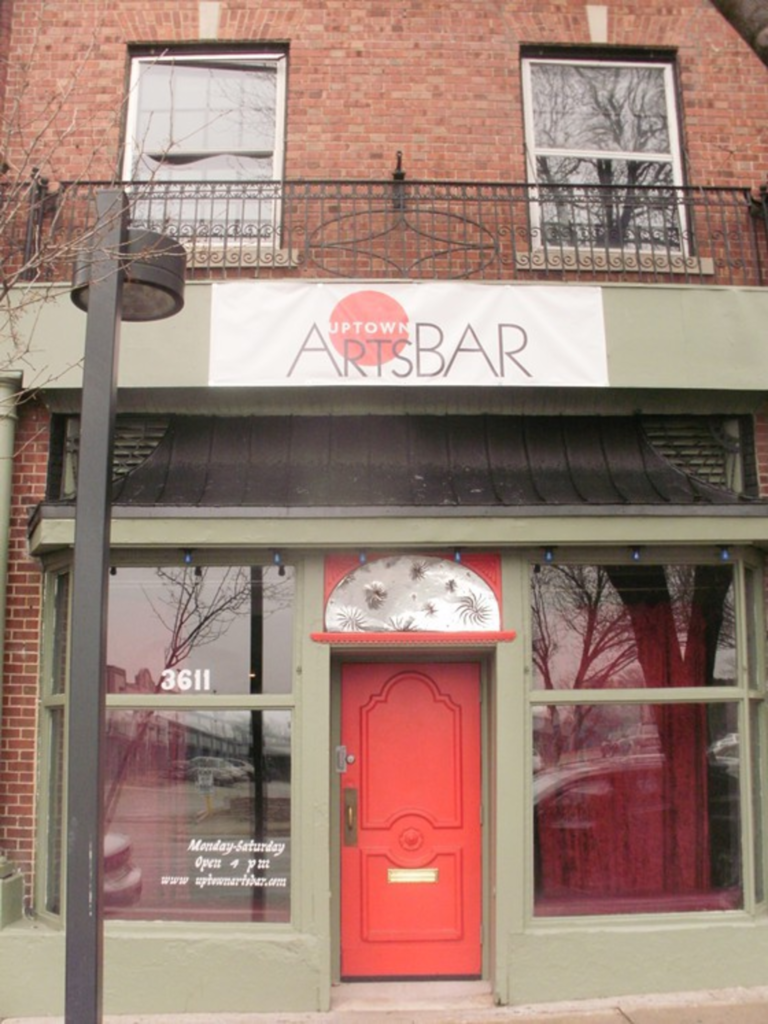 You’ve probably driven by the three-story brick building at 3611 Broadway hundreds of times over the years — or stumbled out of the building just as many times (it’s been some kind of saloon for decades) — without ever knowing that the townhouse-like structure is the Betsy Ross Building. The architect who designed the 1925 structure, Robert Gornall, created the facade that evoked the historic Betsy Ross home in Philadelphia. “The building won a lot of architecture awards in the 1920s,” says the building’s owner, developer Greg Patterson.

After years of leasing the space to a series of bar owners — the past tenants include gay bars (the Other Side, Wilde’s), jazz clubs (Bobby’s Hangout) and contemporary music venues (the Hangout) — Patterson decided to open a different kind of watering hole in the space. His own bar, this time.

Patterson’s new club, the Uptown Arts Bar, opens to the public this Friday night, but the grand opening will be Monday, February 13, when the Arts Bar co-hosts, with the Writers Place, an event called “Blue Monday,” an open-mic night featuring love poems by local writers; artist Sharon Eiker hosts the festivities from 8 to 10 p.m.

Unlike any other saloon in the city, the Uptown Arts Bar will be a partnership between the venue and seven different Kansas City arts organizations: the Writers Place, Byrd Productions, the Heart of America Shakespeare Festival, the Kansas City Fringe Festival, Paul Mesmer Puppet Co., City in Motion Dance Theatre, and River and Prairie Storyweavers. “It will be a community bar,” Patterson says, “presenting, celebrating and supporting the performing arts in Kansas City.”

A portion of the Uptown Arts Bar profits will be donated to the participating arts groups, Patterson says. “Each of the arts groups will also present performances of live theater, dance, prose, poetry, comedy, clowning, mime, puppetry and a myriad of other cultural events.”

After the February 10 opening, the Uptown Arts Bar — which will feature coffee and espresso service and desserts from Cupini’s and the Great American Cookie Factory — will be open Monday through Saturday nights from 4 p.m. until 1:30 a.m. “It will be a great place for people to gather after plays at the Unicorn, Metropolitan Theatre Ensemble and other midtown venues,” Patterson says, “as well as after-concert cocktails following productions at the Kauffman Performing Arts Center or Sprint Arena.”

Patterson has been working to have the stretch of Broadway between 35th and 37th streets designated as the Uptown Performing Arts District because the neighborhood already includes the historic Uptown Theater, the Writers Place, the offices of the Heart of America Shakespeare Festival, and the Kansas City Fringe Festival.

Patterson envisions the second floor of the Arts Bar to be used for live performances, “programs of civic and political discourse, music and lectures by lively local personalities.”

“There will not be a television in the building,” Patterson says. “This space will be for performances, conversation and community.”

There will be a full bar, however, for patrons who prefer their artistic and poetic conversations to be a little more spirited than usual.