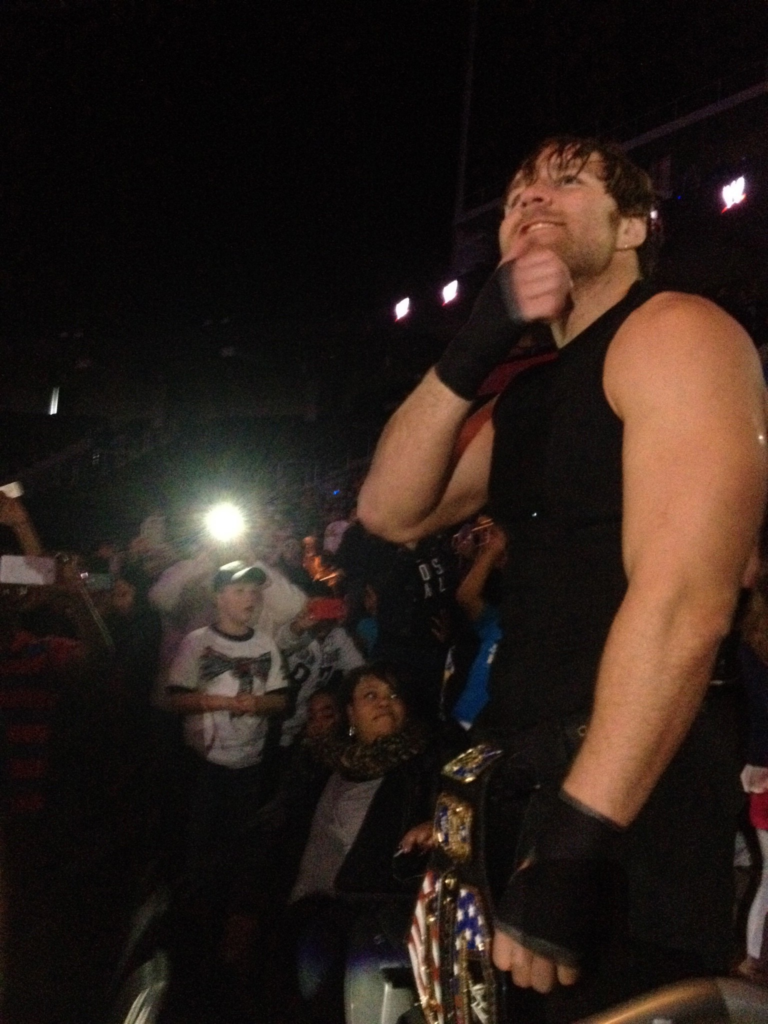 Why do people watch professional wrestling? I ask myself that after especially bad (and sometimes embarrassing) segments on the WWE’s Monday Night Raw or SmackDown. But then The Rock makes a surprise appearance (as he did this past Monday) or a new hero (like Dean Ambrose) or villain (like Bray Wyatt) emerges, and I’m reminded why I’ve been a fan since seeing the Junkyard Dog battling King Kong Bundy in the early 1980s.

It turns out that my personal reasons for watching — the rise of new characters, new stories, new feuds — mirror the findings of some University of Kansas researchers who set out to find out why professional wrestling captures people’s imaginations.

In August, we first told you about the study of the motivations of WWE fans by KU’s Department of Health, Sport and Exercise Sciences. With the study now concluded, we caught up with Jordan R. Bass, KU assistant professor of health, sport and exercise science, to find out the results.

Bass tells The Pitch that the majority of the 400 respondents from eight countries reported that they watch pro wrestling for three reasons: novelty (new story lines, characters, etc.), physical skill of athletes, and enjoyment of aggression.

Bass says novelty was the No. 1 motivating factor for wrestling fans, and wrestling organizations such as the WWE are uniquely position to take advantage of those motivations given that the sport is predetermined.

“The reason that I think [the study is] it’s super important, especially for wrestling executives, is they have the ability to alter the story line based on what people want,” Bass says. “If we did this with the Chiefs, say, and we find out the fans are really interested because of novelty — they want new story lines — well, the Chiefs can’t have new players every week. Well, they can, but they wouldn’t be very good. But if wrestling finds out that they really like these story lines and physically skilled athletes, this week they can highlight that.”

Unlike other sports fans, though, wrestling fans don’t live vicariously through the athletes.

“In our context, it was actually below neutral,” Bass says. “The only other one that was low was physical attractiveness of athletes. … That’s always been rated low in terms of every sample.”

The other motives — aesthetics, drama, escape, acquisition of knowledge, social interaction — were each ranked in the middle. “They were important, but not the most important motivators,” Bass says.

So why do fans follow wrestling if the results are predetermined? Bass says it’s the guessing game of what the WWE organization is thinking in terms of where the story is going and who is going to be pushed as a big star.

“A lot of the people who I know are wrestling fans, the enjoyment that they get out of it is they’re trying to guess who’s going to win this match in the same way that you try to guess the outcome of a college football game,” he says. “Instead of guessing who is going to play better, you’re trying to guess what the company is thinking or what are they going to try to do here. So I think the novelty makes sense if you look at it that way.”

And there is still the surprise factor, such as Brock Lesnar beating the Undertaker at WrestleMania 30, snapping the Deadman’s streak of 21 wins.

Professional wrestling executives’ ability to control the outcomes and destinies of the organization’s characters (barring injuries) should be an advantage over other sports. Vince McMahon, Triple H and other decision makers have the ability to improve upon their television shows, though that’s not always the case (see the past few weeks of uninspired editions of Raw and stale match-ups).

Bass compares wrestling execs’ ability to change course with the first season of Breaking Bad and the decision not to kill off Aaron Paul’s meth-dealing Jesse.

“They found out that the character is really popular — everybody really liked him — so they decided not to kill him off,” Bass says.

“They released all of their episodes at once,” Bass says. “People have argued, and I probably agree, if they would have released those week by week like a typical sitcom while they were still filming, they probably wouldn’t have killed him off.”

Yet, wrestling’s decision makers have the ability to do whatever they want from show to show.

“They may have this character who is a villain but then he becomes super popular,” Bass says. “Well, they can alter that and change it.”

Bass, who grew up a wrestling fan, says he and his colleagues decided to study pro wrestling due to the lack of research on motivations of fans.

In the next few weeks, Bass says the study will be submitted to a journal for peer review. “Hopefully we’ll get it out there and get it published,” Bass says.