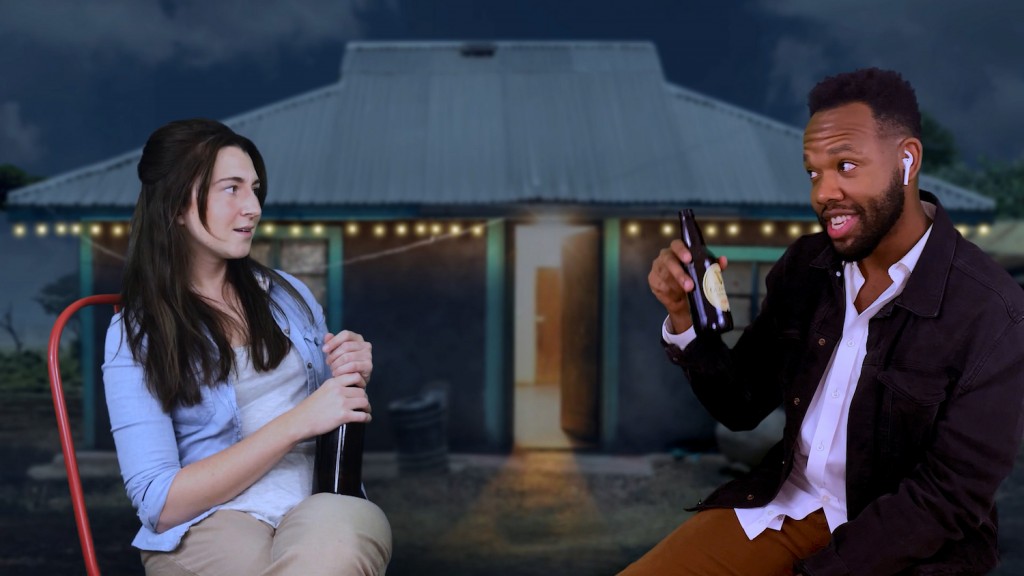 Can we really be friends with a boss? With a savior? The latter descriptor may overstate the interpersonal dynamic at the heart of the Unicorn Theatre’s Death of a Driver, yet it reflects a particular piece of the power relationship.

The two-character play, a virtual production directed by Ian R. Crawford, is an absorbing exploration of a symbiotic alliance between an employer and an employee, each from a different country, with different backgrounds and points of view. The American, Sarah (Elise Marie Poehling), is in Kenya—first as a grad student, then as a businesswoman and engineer—with the goal of building better roads, roads the corrupt government has neglected. Good roads, she believes, will change everything for the people.

Does Sarah know best? She meets and hires a Kenyan taxi driver, Kennedy (Teddy Trice), who becomes her righthand man, a type of foreman or project manager, her “fixer.” The two of them drink beer together. She attends his wedding. A bond develops. “We are together,” Kennedy says—they understand each other. He protects her as she navigates the cultural and political landscape. But their friendship may be intrinsically one-sided. As the story progresses, does she—or can she—protect him as well?

Playwright Will Snider’s skillfully composed script weaves together the threads that make up their relationship’s fabric, and the actors’ finely rendered portrayals, in turn, expose the inner linings. Snider apparently pulls from his own experience. According to the Unicorn’s program, he specialized in post-colonial East African political history as an undergrad. He spent three years working in agricultural microfinance in Kenya and Ethiopia.

Snider’s dialogue, through a series of conversations, explores the layers of Sarah and Kennedy’s relationship and the avenues of their lives—the bumpy roads they navigate, the roadblocks they skirt. Poehling and Trice are both excellent, bringing nuance and depth — even intimacy — to Zoom-filmed performances from separate locales. They appear nearly seamlessly together (editing and photography by Conor Tierney, sound by Alex Davila) in a 76-minute one-act that traverses several years. The timing is unerring; the production and actors click.

For Sarah, Kenya is a land of opportunity, a last frontier. She believes that she, not the native Kenyan, better understands—can better solve—the country’s problems. In her mind, Kennedy’s perspective is tainted by tribalism. “Forget about politics,” she says. “Focus on the private sector.” She fears that political unrest will scare away investment. But to Kennedy, “What in the world is not politics?” For them both, control is key, and the play delves into this right-of-way issue in realms both personal and political.

With subtle references to our own civic goings-on, Death of a Driver tackles a global idea via a local story, of two distinct individuals—their wants and needs, and their complicated relationship.

The production is available for streaming on-demand through November 29. Season subscribers can receive the access code by contacting the box office. Those who are not season subscribers “pay what you can.”

Death of a Driver