The Unicorn’s Men on Boats is a refreshing ride 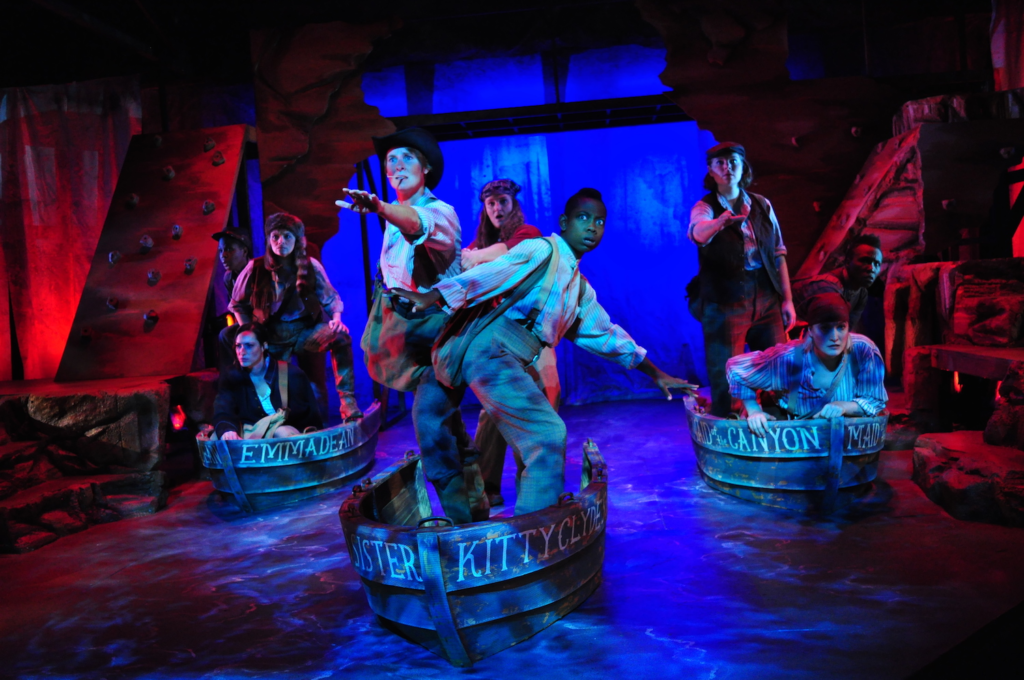 Adventurers, that special class of individuals who long for change and push their personal limits, who bristle at the same old same old. Who also possess, by necessity, that little bit of crazy, disavowing caution and admitting risk.

Such were the characters comprising John Wesley Powell’s 1869 geographic expedition — at the outset, 10 men in four boats — down the Green and Colorado rivers. We meet a version of that famous outfit in the Unicorn Theatre’s vastly entertaining season opener, the 2015 play Men on Boats, a co-production with UMKC Theatre.

Powell’s was an excursion to explore and officially map — and name — the region. Other than American Indians, few had ventured into these wilds. And fewer, if any (white people, anyway), had successfully maneuvered the rivers’ waterfalls, rocks and rapids. Basing the story on Powell’s journals — snippets of which the script incorporates; we catch those switches in the language used — playwright Jaclyn Backhaus uses plenty of poetic license, not the least of which is women standing in for the men. 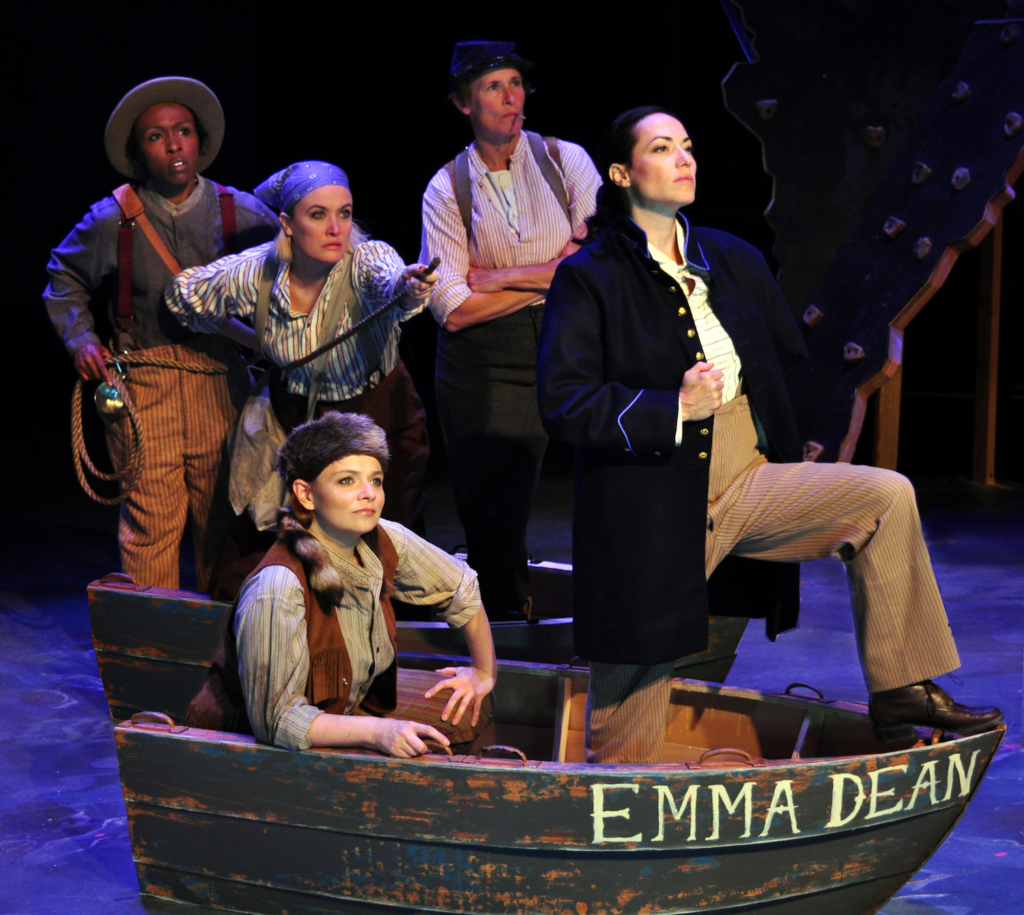 More than a girls-just-want-to-be-cowboys exercise, it’s a clever construct lacking in gimmick and adding dimension and humor to characters and group dynamics that might not otherwise show through. The actors’ exaggerated male behaviors not only sell their male counterparts but also amplify the men’s quirks and traits — and make these nearly 150-year-old souls (their attire designed by Katherine Davis) memorably vivid. The tone is satiric and comedic, yet the result is also revelatory — about the types of people who would tempt fate and, perhaps, enter their names into history.

“Holy shit, holy shit, holy shit!” they yell. We sense their thrill and their fear as their boats take on the swift, dangerous current (augmented by Jon Robertson’s music and sound, and Hector Quintero’s lighting). Under Missy Koonce’s adept direction, the tight synchronization of the action sequences and the strong performances of the ensemble help us envision their surroundings and bring those dangers home.

But the whole story isn’t on water. Over the journey’s days, weeks and months, they camp, hunt and fish, cook, sing, argue, encounter American Indians, and endure the loss of supplies from boats capsizing or taking on water. In a nod to modern tastes, they especially mourn their lost slabs of bacon. And their bottles of whiskey. But the coffee flows. 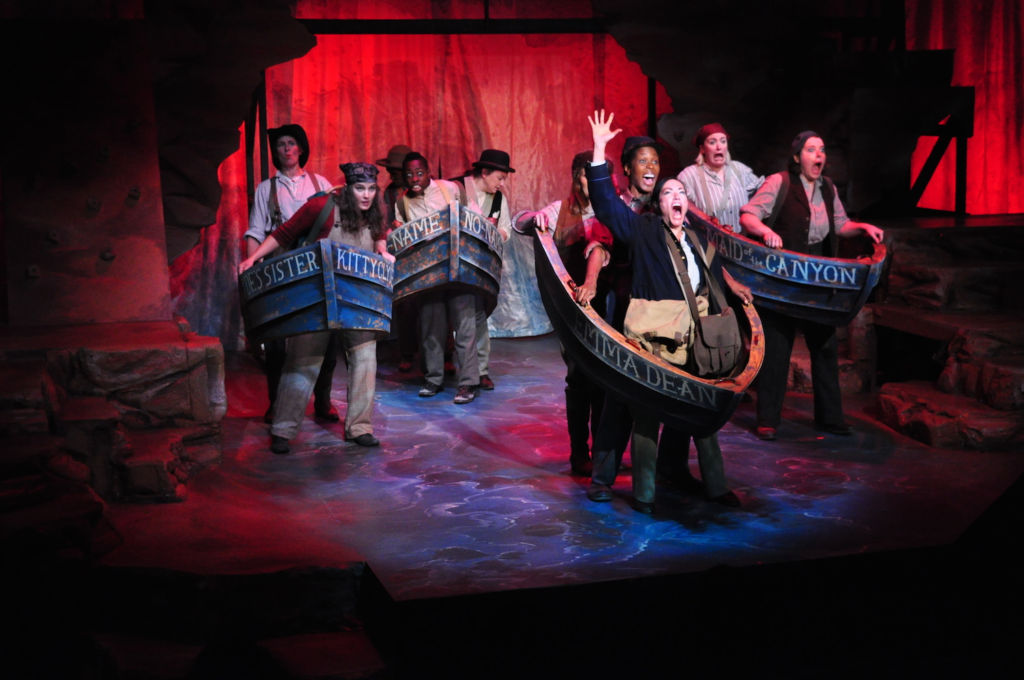 Major Powell, a former Union officer (Vanessa Severo), is the authority here and the crew’s motivational speaker, and the actor is both commanding and touching — also funny, with a recurring stance, and agile when her one-armed Powell slips on a steep mountainside (scenic design by Kelli Harrod).

Old Shady (Carla Noack), Powell’s brother, says little but doesn’t have to — we get the kind of guy he is, thanks to Noack’s impressive use of expression and bearing. Just a look can draw a laugh. And he likes to sing (his ditties’ melodies composed by Dan Chouinard).

Among the rest of the strong cast are Katie Gilchrist, as the group’s cantankerous but not-uncaring cook, Hawkins; Rasheedat “Ras” Badejo and Chioma Anyanwu as the Howland brothers (and also as sarcastic American Indians); Marianne McKenzie as Hall, the group’s mapmaker; Megan Sells as wealthy Brit Frank Goodman, who’s in it for fun, until the fun ceases; Yetunde Felix-Ukwu as John Colton Sumner, who longs for the Yukon; Emilie Leia Karas, who brings youthful enthusiasm to Bradley, the expedition’s youngest member; and Jessalyn Kincaid, as old man Mr. Asa, at the end of the play, and as the authority-questioning William Dunn, who disagrees with Powell’s decisions.

“We don’t know if it’s the right choice until we’ve made it,” Powell says, pronouncing a kind of thesis for this 90-minute one-act.

One right decision, anyway, is that of the Unicorn and UMKC Theatre here, to stage this imaginative show.