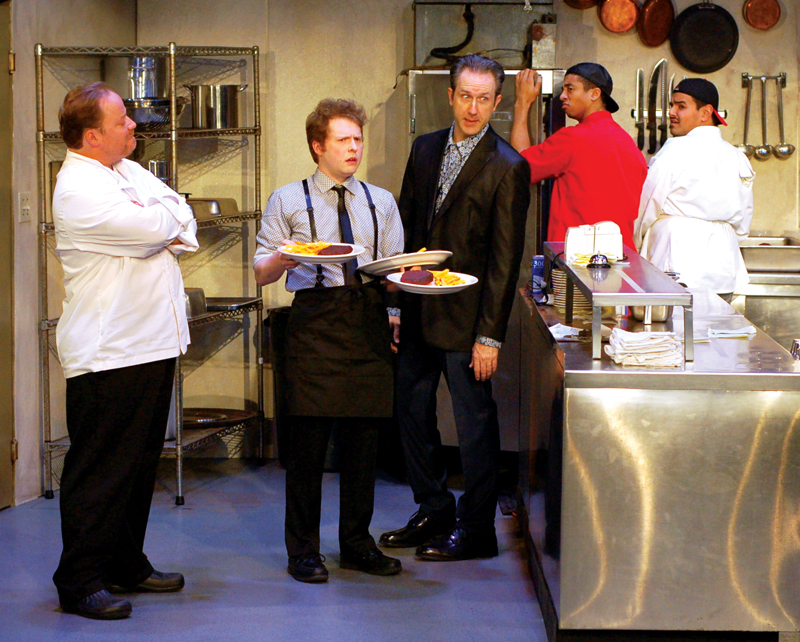 Most theatergoers can rattle off a laundry list of emotions a show can inspire: glee, sorrow, somber self-reflection (in the worst cases, pity and condescension). Add hunger to the list for How to Use a Knife, Will Snider’s ambitious, authentic-feeling riff on back-of-the-house drama at a sleepy restaurant.

The play, a rolling world premiere now at the Unicorn Theatre, unfolds entirely in the kitchen of a bar and grill in New York’s Financial District. The line cooks, Carlos and Miguel, rule dinner service, searing burgers with mechanical efficiency and browbeating busboys in rapid-fire Spanish. But their reign ends when Michael, the absentee owner, brings in a new chef: George, a former culinary rockstar who traded Michelin stars for ungraded burgers after a personal tragedy.

Despite his pedigree, George seems less focused on refining the food than on unloading his emotional baggage (alcoholism, divorce, death). To do so, he enlists Steve, a Rwandan immigrant with a sobering calm and a soldier’s focus on the task at hand (in this case, dishwashing). The pair quickly form a tight bond: George teaches Steve knife skills and stock-making, while Steve teaches George how to clear his head and tame “the beast within you.”

At the Unicorn, director Sidonie Garrett shapes a fast-paced production in glorious theatrical Smell-O-Vision. Garrett sets the tone (and the menu) before the show begins: We enter the theater to the smell of freshly fried onion rings and take our seats to the rattlesnake hiss of something sizzling on a stove. But Garrett also captures the pace and tension of the kitchen, guiding her solid ensemble through confrontations that spurt and shrink along with the dinner tickets.

Actor Matt Rapport isn’t an obvious fit for George, whose rants incline toward the vicious alpha-chef archetype. But that turns out to be a strength: Rapport has a firm handle on the chef’s vulnerabilities and self-doubt, painting him as a man who has lost his bite, if not his bark. “Cooks are really fucking abnormal people,” George spits late in the play. In Rapport’s care, the line is as much self-realization as sermon.

As Steve, the singular Damron Russel Armstrong is predictably strong, but his performance here is proof he hasn’t grown complacent; he takes the time he needs to conjure each image without sacrificing drive. A scene in which he coaches George through a meditation technique is one of the play’s most affecting, despite the low stakes.

Justin Barron does some of his finest work as Carlos, a Guatemalan green-card holder with a sly, Mercutio smile. Barron seems perfectly relaxed under pressure — though he spends most of the play stabbing tickets and tossing pans around a flat top, he never misses a cue or rushes a speech. As Miguel, an undocumented immigrant, D’Andre McKenzie is similarly self-possessed. Miguel speaks (and sings) almost entirely in Spanish throughout the play but, thanks to McKenzie’s charismatic performance, we don’t need a phrasebook to get the jokes.

J. Will Fritz is eminently punchable as Jack, a whiny food runner with the sense of entitlement only a lifetime of privilege can provide. Brian Paulette is deliciously sleazy as Michael, a hack restaurant owner with more smarm than charm. And Carla Noack imbues a small role with precision as Kim, a steely immigration worker hunting for a war criminal.

Snider’s script is tightly controlled, but not every menu item works. Although Rapport blazes through speeches like dishes on the line, pace alone can’t motivate a few of George’s introductory (and largely expository) rants. And the script takes a few self-conscious jabs at race that don’t quite land. An exchange in which George suggests he’s not really white, given his Euro-mutt heritage, comes to mind.

Still, How to Use a Knife feels fresh in its light stirring of heavy themes. Snider addresses alcoholism, deportation and genocide, but nothing feels overwrought or After School Special-fied. Threats are conveyed with a hard-edged smile, insecurities bared with a deflecting shrug. A scene in which Carlos warns George about the consequences of silence stands out, thanks to the script’s subtle treatment and Barron’s restraint. This is a serious drama with fine-edged humor. And Garrett and the Unicorn elevate these simple ingredients with a sophisticated plating.

How to Use a Knife