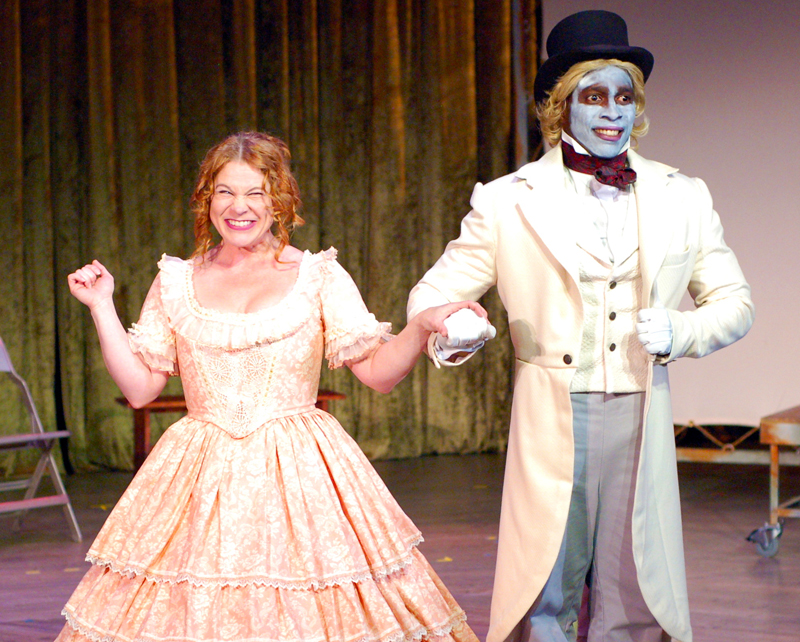 Branden Jacobs-Jenkins’ marriage of 19th-century melodrama and modern metatheatrics premiered in 2014 to untempered critical acclaim. But the Unicorn’s lively production — helmed by director Damron Russel Armstrong — earns accolades all its own.

The play opens with BJJ, a stand-in for Jacobs-Jenkins, directly addressing the audience. “I’m a ‘black playwright,’ ” he announces, and we hear the scare quotes. You can’t be a black playwright without being a “black playwright,” BJJ suggests; critics will read race into even the most benign, universal themes. It’s a fair point, but a puzzling prelude for the show to come. Besides the opening monologue, 90 percent of the lines are lifted whole-cloth from The Octoroon (note the democratizing article shift), Dion Boucicault’s 1859 “sensation drama” about race relations in the antebellum South.

The play-within-a-play begins at Terrebonne, a Louisiana plantation on the verge of financial collapse. The plantation’s heir, George Peyton, has recently returned from France — only to be thrust immediately into a fight to save both his home and his “octoroon” (one-eighth black) love, Zoe, from the clutches of a wicked overseer named M’Closky. Subplots include a slave escape and auction as well as the murder of a young slave boy while in the company of Wahnotee (a buffoonish stereotype of an American Indian).

Jacobs-Jenkins takes some liberties with the original script, adding interludes in which three slave women — Minnie, Dido and Grace — gossip in a modern patois about hot guys at “slave mixers” and accuse one another of acting “ghetto.” But his chief adaptation is the casting. Whereas white actors would have played all the roles in Boucicault’s day, BJJ dons whiteface to play both George and M’Closky. More discomfiting: a time-traveling version of Boucicault called “Playwright” (note the lack of modifier) applies redface to play Wahnotee, while his assistant dons blackface to play two stereotypical minstrel roles.

Sharper critics than I have written about how this choice expertly elides difference and mocks race as a silly construct; Jacobs-Jenkins has expressed similar sentiments in interviews. But Armstrong seems less interested in dismantling race as a social construct than in examining what we’ve done with it.

One clue is the committed performers, who don’t deflate stereotypes so much as amplify them for maximum discomfort. I can think of few more alienating images than that of light-skinned actor Michael Thayer shuffling around stage in a burnt-cork mask, fanning the air with chicken-wing arms and pontificating, Uncle Tom-style, from overdrawn red lips. (This is no critique: Thayer gives himself fully to the caricature without a lick of protective irony.) Logan Black likewise makes us squirm with his committed, infantile portrayal of Wahnotee; he war-whoops around the stage in a sort of bastardized Ghost Dance, feathered headdress a-ruffling with each joyful bounce. We cringe, then laugh, then cringe again at our laughter.

Cinnamon Schultz is convincingly repulsive as the debutante Dora, swooning and cakewalking around the stage while the tiers of her Pepto-pink ball gown flutter along with her eyelashes. As Minnie, Rasheedat Badejo earns huge laughs with a series of elastic sexual mimes. As Grace, Teisha M. Bankston is subtly (but often hilariously) sarcastic. And Amber McKinnon gives perhaps the most nuanced, naturalistic performance as Dido, a sensitive but pragmatic slave who has learned to mask her exasperation with a thin-stretched smile.

As BJJ, George and M’Closky, Rufus Burns shines in the show’s most difficult role. In one memorable scene, Burns fights convincingly with himself, slipping into each character’s mannerisms with immediate ease. Jessica Franz — who plays Zoe — goes flat at times, but her aggrieved Scarlett O’Hara swoons smartly emphasize some of the more provocative lines: “I had rather be a slave with a free soul than remain free with a slavish, deceitful heart,” she gasps in one scene. (Get back to us in a couple weeks, we think.)

The contrast between the performance styles of the white and black characters is part of the production’s genius. Zoe and George’s anguish is aggressively, outrageously performed, while the suffering of the house slaves is masked with minimizing “day at the office” gripes. When Minnie learns that she is to be sold at auction, she simply shrugs, “Yeah, I didn’t wake up thinking this was the way my day was going to go.”

It’s in these scenes when race seems most confidently addressed. In Boucicault’s script, conversations among slaves offer light comic diversions. In Jacobs-Jenkins’, they underscore the breathless hysteria of white folks over the same indignities that black folks meet with eye rolls and ain’t nobody got time for that resilience (see: Dave Chappelle’s gentle redressing of white outrage in his post-election Saturday Night Live monologue).

The play’s direct-address monologues and black-, white- and red-face makeup place us in an anchorless, alien world. Scenic designer Tristan James follows that lead with a stark but functional set featuring wheeled, metal-framed platforms flecked with rust. In lieu of a proscenium arch, James has installed a curved track, along which ivory-hued hanging panels slide and spin into new configurations. The effect is not unlike the dividing curtains in an overstocked hospital room.

As we might expect from a play preoccupied with its own artifice, An Octoroon ends untidily, resting on an image that seems coded with too much significance for Jacobs-Jenkins’ previous, self-conscious deflections. As a result, the tension between artifice and authenticity — sustained through much of the play — becomes a kind of whiplash. “I’m here to make you feel something,” BJJ claims in his opening monologue. In the finale, he returns to the point again: “The point of this whole thing was to make you feel something.” But we never get a sweeping moment of sensation or semantic clarity.

Thankfully, the Unicorn doesn’t push for that. Instead, this production takes a Brechtian view of catharsis, preventing audiences from purging emotion so they might use it to fuel critical reflection. Ultimately, An Octoroon succeeds in its rejection of resolution and wobbles in its insistence that artifice can circumnavigate a script and lead us to authentic feeling once again. But that failure — thanks to Armstrong’s shrewd direction — yields far more useful conversation on the ride home.

We leave not sated but scratching our heads, amused and bemused in equal measure. “Racial politics?” indeed.