The Unicorn touches heaven, while the Rep stays earthbound 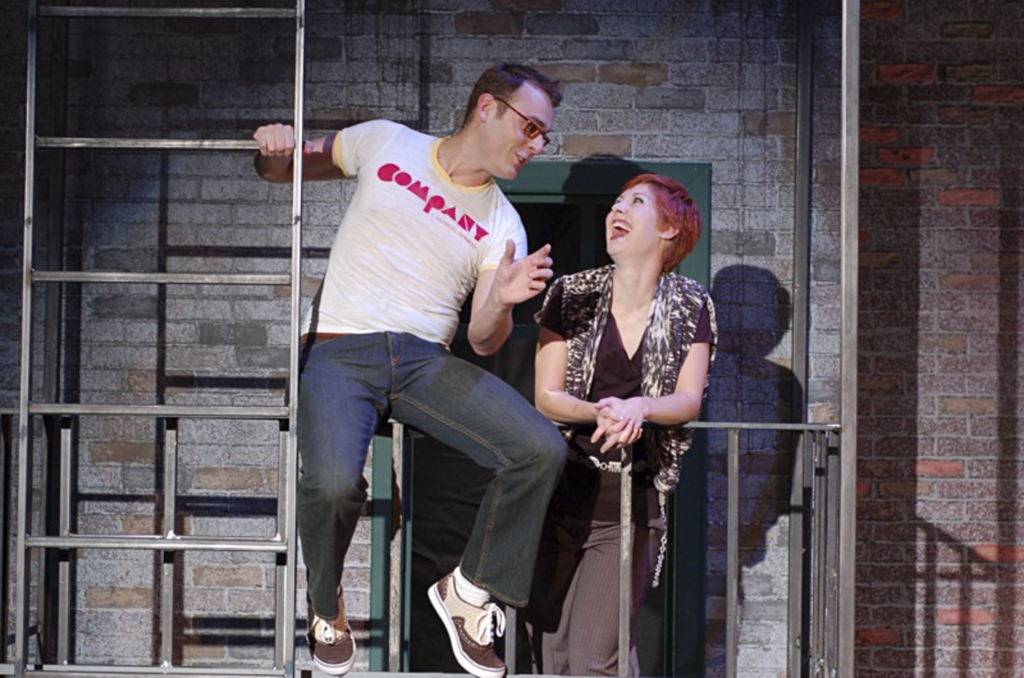 The Kansas City Repertory Theatre’s season opener seems to embark on an ambitious mission with its first words: “Do you have any idea how amazing it is to have faith?” A musical addressing that question with daring, imagination and probing intelligence would have made fascinating and vital theater. Unfortunately, Saved! is not that musical.

Though its exploration of the topic of faith is earnest, it is also disappointingly shallow. Even its definition of the word faith mutates so randomly from scene to scene that by the time it reappears as the show’s last word, it has become nearly meaningless. This is emblematic of the musical as a whole. Despite a couple of catchy tunes, the book is muddled and halfhearted. The characters and lyrics are unremarkable, neither reaching deep nor soaring high. There isn’t that leap into the divine that one hopes for in a musical, let alone one speaking to faith.

Saved! was born as a little-seen 2004 teen-comedy movie of the same title and born again in 2008 as an off-Broadway musical by composer and lyricist Michael Friedman; co-lyricists John Dempsey and Rinne Groff wrote the book. Despite controversial themes (religious hypocrisy, homosexuality, teen pregnancy) and an acid tone, the movie was critically well-received. But there was no saving the stage musical from lukewarm reviews. Nearly all accused it of losing the movie’s satirical edge. The production died after three weeks, but a revamped version, led by original director Gary Griffin, rose again this past weekend to launch the Kansas City Repertory Theatre’s new season.

Cut to an energetic 95 minutes, this Saved! overcomes an exposition-heavy first scene to hook us into the story of four seniors at American Eagle Christian High: Mary; her boyfriend, Dean; her best friend, Hilary Faye; and Patrick, the pastor’s son, recently returned from years as a missionary in Gabon. Dean, who is likely gay, is shipped to a de-gaying camp; neither coincidentally nor immaculately, Mary gets pregnant. All four characters struggle with issues of faith, friendship, loyalty and family, but only at after-school-special depth.

The writers indulge in cheap broadsides. One character’s cousin, we are reassured, “gave up her whoring ways and now … works at the second largest Wal-Mart in Ohio.” So a show that ought to go where angels fear to tread keeps religion at arm’s length, using it mostly as colorful background for standard high school drama, like a Christian Glee.

It’s not just faith that lacks definition. Many of the characters never move beyond the generic. Most problematic is the central role of Mary. Apparently extremely naïve, she believes that she has experienced a personal visitation from Jesus, who asked her to save her boyfriend from homosexuality. But it’s implausible that a girl so devout would engage in premarital fornication — which she has been taught is a great sin — with no emotional aftereffects. Because the story doesn’t take Mary seriously as a character, she’s left with no plausible reaction. Unfortunately, this makes it harder to feel for her as she suffers through months of secret pregnancy alone. Laura Huizenga as Mary generates sympathy with what she’s given, but she can cover only some of the book’s holes.

Justis Bolding has fun as holier-than-thou queen bee Hilary Faye, and David Hull makes an appealing Dean. Nick Spangler has fine moments as Patrick, the conflicted pastor’s son, particularly in “Make It True,” a call for living Christ-like values, rather than just preaching about them. With their matching cartoon New Yawk accents, the characters of Jewish goth reprobate Cassandra (Gillian Goldberg) and Hilary Faye’s wheelchair-bound brother, Roland (Patrick Andrews), are played far too broadly, but their love story still manages to be winning.

As expected at the KC Rep, the production is technically excellent in every way, and the elaborate set, with its fancy rolling elements, almost wheels away with the show. Saved! is an entertaining musical mounted with talent and dazzle to spare. But it doesn’t come close to showing us the wonder of faith. And it doesn’t reach the soul.

Like a space capsule leaving its launch rocket far below, [title of show] dispenses with steam-spewing exposition and gear-grinding transitions — all the machinery, in other words, that gets most musicals off the ground and then moves characters from one number to the next.

Freed from all the usual mechanics of its genre (and even a name), [title of show], the Unicorn Theatre’s stellar new production, is propelled by little more than wit, verve, whip-smart lyrics, and music and story. And under the inspired direction of Missy Koonce, it’s powered by the abundant heart and energy of its performers — the refined fuel that’s the very essence of musical theater.

Any description of [title of show], including an explanation of its unusual moniker, only makes the story sound impossibly contrived and confusing. It’s not. It’s loop-de-loop self-referential and confettied with pop-culture shout-outs and show-biz in-jokes, but anyone with a handle on the current state of our culture — that is, anyone familiar with The Simpsons or politics — will follow every curve of this show’s twisty story with little effort.

Hunter and Jeff are two friends with stalled theatrical careers (cue “Two Nobodies in New York”). Inspired by an upcoming musical festival, they resolve to write an all-new show by the festival’s deadline, just three weeks away. Even more ambitious, they want to avoid the usual derivative adaptations of movies, TV shows or books. Instead, they long to create “something orig.” That phrase, with its outsized ambition love-seated in casual abbreviation, exemplifies the friends’ approach: reaching high with their sense of humor intact.

The original idea that Hunter and Jeff come up with: Two characters named Hunter and Jeff (originally played by the writing-composing team Hunter Bell and Jeff Bowen themselves — the roles here are taken on by brilliantly matched Seth Golay and KC Comeaux, respectively), joined by their friends Heidi (Jessalyn Kincaid) and Susan (Natalie Weaver), write the very show in which they are now appearing. Told you: twisty. Don’t worry. It’ll all be clear when you see it — which you really should.

Koonce and musical director Anthony T. Edwards have taken four of the city’s best performers and made an ensemble that’s tighter and shinier than the Situation’s six-pack. Golay’s easy­going charisma works well for Hunter, the affably tortured writer who gets (and gives himself) some of the play’s biggest laughs. As the sardonic, punctilious Jeff, Comeaux executes a perfectly controlled slow burn. When it’s time to sell out, he convinces the team to hold on to their integrity (cue the anthem “Nine People’s Favorite Thing”).

A very likable Kincaid shows formidable chops on Heidi’s show-off vocals, while Weaver kills as wisecracking Susan, with quirkily precise comic timing. She also performs one of the best songs of the evening, the unexpectedly moving “Die, Vampire, Die!”

Little could feel more ridiculous than furtively wiping away tears during a song whose chorus repeats Die, vampire, die, but Weaver’s rendition reduced at least a couple of audience members to just that indignity. The vampires she is vanquishing are self-doubt and despair — demons that strike in the night. Because this show isn’t, after all, just about Wonder Woman references or making it to Broadway. It’s about how nobodies with audacity and faith in themselves can make dreams happen.