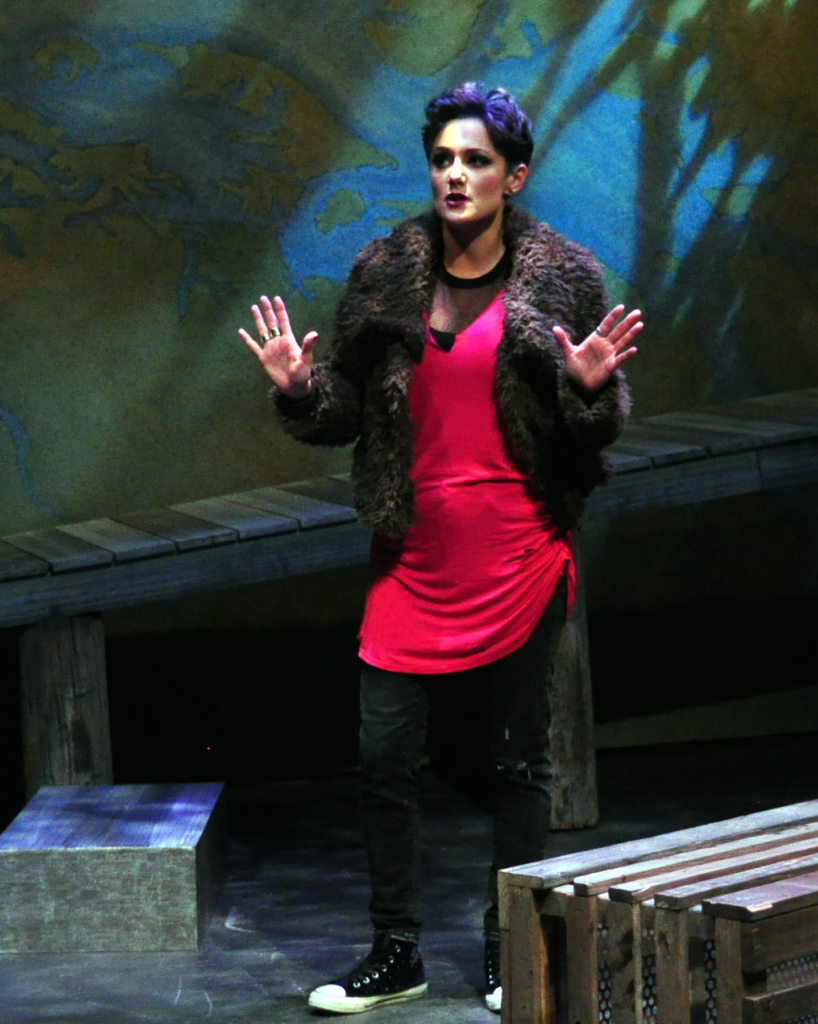 Things change quickly these days, especially in politics, and a play written in 2000 would probably need a refresh. That’s what director Cynthia Levin, at the Unicorn Theatre, has done with prolific playwright Lee Blessing’s Chesapeake — with his blessing and his contributed tweaks.

Originally a two-act, one-man monologue, Chesapeake here runs 90-plus minutes without intermission, with a woman (Katie Karel) in the role of Kerr (pronounced cur), a controversial performance artist who has drawn the attention — and becomes the foil — of conservative congressman and U.S. Senate candidate Therm Pooley, who is to the National Endowment for the Arts what the current U.S. ruling party is to the Affordable Care Act.

The place of the arts in society, particularly their funding, is a theme at the heart of this play. Against the use of federal funds for expression he considers offensive, Pooley runs for the U.S. Senate — and wins — by turning Kerr’s NEA-funded performance piece against the artist (“what the media’s for,” he says), who is, after that, determined to get payback. And that’s where the play segues from the first half’s exposition and backstory to the latter part’s more metaphysical adventure, breathing with humor, some insight and philosophy, a bit of silliness even — a fantastical tale, infused with America’s love for its dogs, that playfully requires a suspension of our disbelief.

One actor portraying one primary role, Karel voices a handful of other characters as well (including Pooley’s beloved dog, Lucky, a Chesapeake Bay retriever), as she commits to a storytelling feat that keeps her onstage the entire runtime, minus a few moments’ costume change. Karel’s clipped speaking style, merging with the show’s wordiness, at first emphasizes the story’s telling, allowing (for this viewer, anyway) no instant immersion in the tale. But this recedes as the show proceeds. Karel performs with force and precision, holding our focus and anchoring the show, the intimate setup of the theater’s Jerome Stage also enabling a connection with viewers, who are seated on three sides of the stage.

Blessing’s vivid — and abundant — language, tied to Karel’s strong performance and Levin’s smart blocking, allow our imaginations to picture the goings-on that Karel’s Kerr details. Partnering sound effects (by David Kiehl) effectively assist those mental images. The set design (by Ian R. Crawford) resembles a dock by the bay (here, placed before a large, hand-painted backdrop of the Chesapeake Bay), acting as a multipurpose platform that by its lack of specificity of place serves as an everyplace for the story’s settings. The lighting design (by Emily Swenson and Alex Davila) punctuates that space, adding mood and spatial layers.

“If we fail to examine publicly and persistently and collectively the innermost nature of life, we lose the right to call ourselves a society at all,” Kerr says late in the show. “We become merely an aggregation of purposeless spirits.” In this Unicorn production of Chesapeake, Karel’s Kerr — and her Chesapeake Bay retriever — both possess purpose and an ample amount of spirit.