The Unicorn Theatre’s American Son speaks to us all 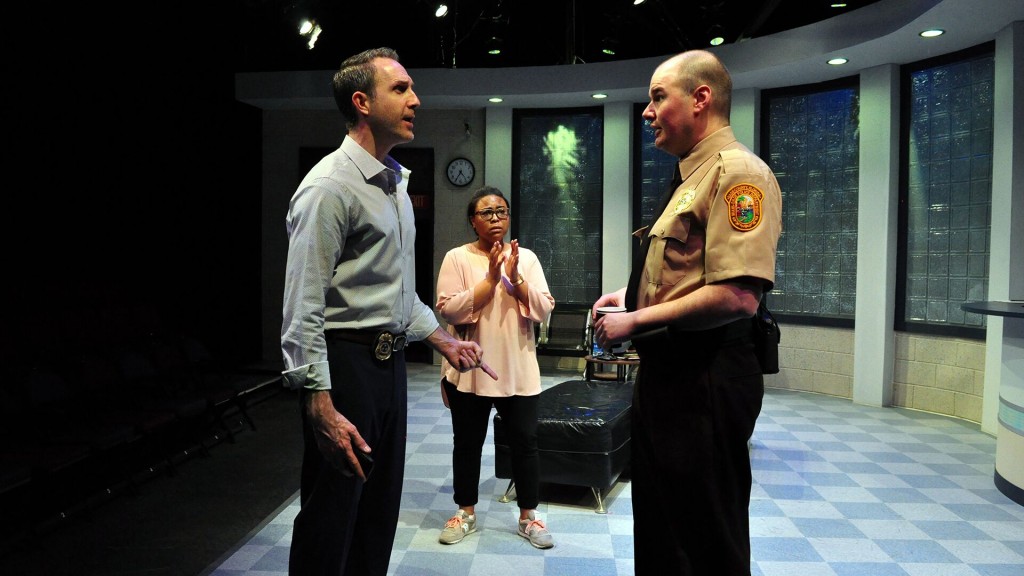 From left: Paulette, Bankston, and Linebarger // Photo by Cynthia Levin

A woman sits in the waiting room of a Miami-Dade County police station, looking for answers on the whereabouts of her teenage son. But answers aren’t forthcoming from the officer in charge.

And he’s in charge, make no mistake. As she awaits information and the arrival of her estranged husband, we wait as well. And we’re not only suspended with her, in the disquieting wee hours before the sun comes up, but we’re also witness to the attitudes (and the attitude) that inform, even shape, her sense of limbo.

Directed by Damron Russel Armstrong (artistic director of the Black Repertory Theatre of Kansas City), the four actors comprising the cast of American Son, at the Unicorn Theatre, give fine, focused performances in an 80-minute play that rises and falls in intensity but never lags or loosens its grip. Around the event of a missing black teenager, playwright Christopher Demos-Brown builds on the kinds of issues—societal, generational—that influence his characters’ perspectives, and add to their apprehension and unease. 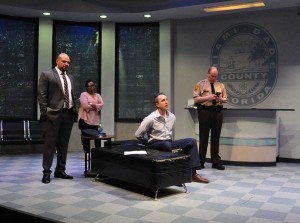 The mother, Kendra Ellis-Connor (Teisha M. Bankston, very good), a university psychology professor, is anxious. And she’s angry. And, at times, she’s agitated. Her son, 18-year-old Jamal, is always home by midnight, but not on this particular night. And he isn’t answering his phone. The seemingly clueless on-duty cop, Paul Larkin (the skillful Bob Linebarger), figures Jamal is on South Beach, with a girl. It’s what he would’ve been doing at that age, he says.

Kendra knows differently—and, by extension, so do we. But the officer asks, anyway, of the bright private-school-educated Jamal, who has a “prestigious internship” to get to that day: Does he have a record? Does he have a street name?

Without answers and with mounting worry, Bankston’s Kendra switches from rational calm to elevated-decibel outbursts, and back and around again, within moments—or, as Linebarger’s officer Paul so inelegantly puts it, “from zero to ghetto in, like, nothing flat.”

Jamal’s father, Scott Connor (an excellent Brian Paulette), arrives, and things smooth a bit. For a bit. Perhaps because Scott is a law-enforcement officer himself or because he’s white or because he’s male. More trusting of the police process, Scott exhibits more reasoned frustration. But he, too, is unsuccessful at extracting much information from the dry police-station well.

So they wait. And while their vigil wears on, they tear at the remnants of their marriage and at their disparate views on parenting, particularly those concerning the raising of a black son.

Demos-Brown’s script adeptly mingles these parents’ current crisis with their marital difficulties, and their very different experiences and worldviews. But Kendra and Scott share a mutual fallibility—of personhood, of parenthood—that complicates their story the way marital and family relationships are complicated. Which makes it impossible to take sides. We feel for each of these imperfect parents. 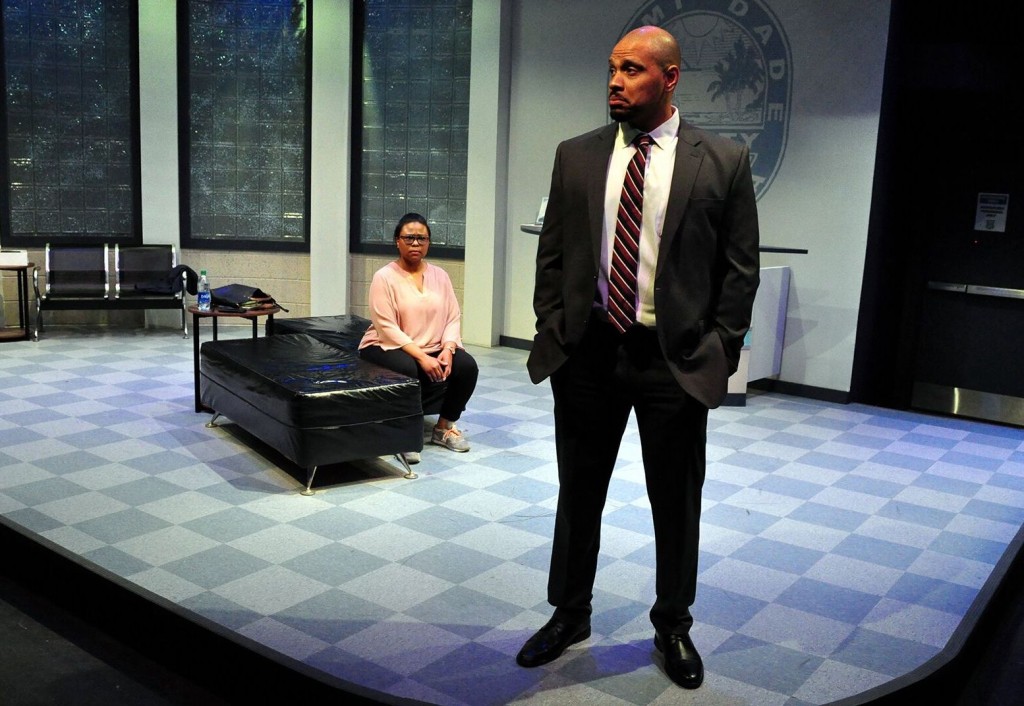 When the liaison officer, Lieutenant John Stokes (a powerful Lewis J. Morrow), finally arrives at the station, he offers the potential for news as well as some hard truths. Morrow brings a dominating presence to an officer who professionally and personally straddles two worlds—and here, upholds one.

The show runs without an intermission, in a rainy predawn. Lightning occasionally lights up the darkness outside the tall windows of the dingy Florida-modern police station, where palm trees sway in the thunderstorm’s wind (scenic design by Kelli Harrod, lighting by Nicole Jaja, sound by David Kiehl).

Demos-Brown doesn’t follow the kind of storyline that tidily resolves from atmospheric disturbance to relative calm. He gives us relationships that are touching, messy and painful, and he leaves us with loose ends. Just like life so often does.

All productions at The Unicorn Theatre are canceled until further notice.