The Unicorn gooses Chekhov with a Bird that fails to soar 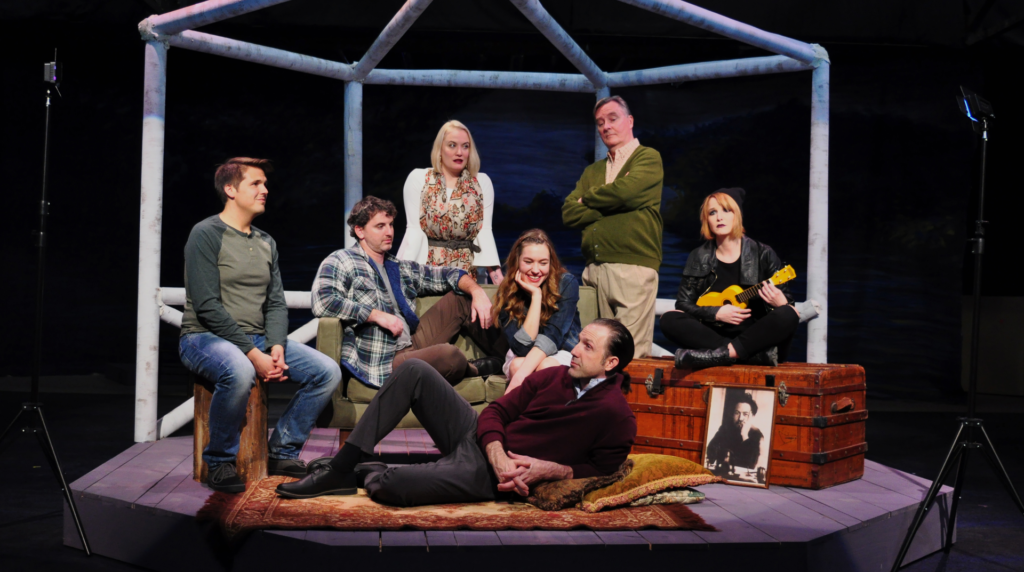 The line sounds cynical. But, as is the case with much of Posner’s script, it’s predicated on a profound, at times heartbreaking hopefulness. Optimism, after all, is the oxygen of disappointment.

The Unicorn Theatre — in a co-production with UMKC Theatre — tempers a few of Bird’s more melancholy impulses, and director Theodore Swetz has coaxed dynamic performances from a cast of Unicorn veterans and UMKC graduate acting students. But this staging lacks some of the imagination and invention of its source material, and a few muddled symbols may leave the audience longing for the simplicity of Chekhov’s gun.

Posner’s 2013 script traces the rough contours of Chekhov’s play. There’s a troubled young playwright — here Conrad, not Treplev — battling suicidal impulses as he attempts to stage a “site-specific performance event.” There’s his mother, Emma Arkadina, an aging actress with a cruel streak. And there’s her famous lover: Doyle Trigorin, a writer so talented, even Conrad’s young actress-girlfriend, Nina, dotes on him.

The first act is a postmodern potpourri of blue songs, black humor and heady improvisation. Mash (Heather Michele Lawler) strums the ukulele and spits through political rants far too timely to have been a part of Posner’s original script. Conrad (Doogin Brown) bemoans the lack of “new forms of theater” — just before he crosses downstage to solicit romantic advice from the audience.

The snappy quips (and naked emotional pleas) keep these meta-theatrical elements from seeming gimmicky. Instead, the first act feels … well, sort of American, from the play’s titular profanity and breezy patter to the breakneck speed with which wide-eyed characters are walloped by close-call dreams and unrequited love.

But the second act, which takes place almost entirely around a kitchen table, squanders much of that frustrated energy. The action is pure Chekhov, right down to the pacing. Swetz and his actors luxuriate in the lines — and while that indulgence might work in the OG Seagull, it feels glacial after such a fast-paced first act.

That’s not to say the Unicorn’s cast isn’t capable. Katie Gilchrist (as Arkadina) and Robert Gibby Brand (as Dr. Eugene Sorn) make a meal of their modest roles. Brian Paulette is especially strong as Doyle, fleshing out the relative caricature with specificity and sharpness.

The play’s younger characters might be filed as either ironists or ingenues, clinging to their respective camps with the resolve of Sharks and Jets. Brown, who has one of the play’s most emotionally taxing roles, refines Conrad’s defensive sarcasm without seeming snide or bored. Lawler strikes a similar balance between caustic and corny as Mash, a manic pixie dream goth who dresses like a stage manager on shore leave.

Amy Billroth-MacLurg lends a brittle wistfulness to Nina, and Duncan McIntyre is endearing as Dev, a bushy-tailed tutor who just wants someone to share his delight in the odd ways of geese. Both McIntyre and Billroth-MacLurg are ideal scene partners for any actor, reactive and emotionally open. But their characters are rendered in broader strokes, coming off flatter than their prickly counterparts.

The production showcases some exceptional designers who could have benefitted from a firmer hand at the wheel. Still, I’ve never seen better work from Ashley Kok. The lighting designer paints each act with a different emotional palette, but the vibe is unmistakably (and appropriately) romantic throughout: dappled, impressionist colors, yellowed lanterns, café lights that ring the rafters like halos. Sandra Lopez’s scenic design creates a dreamy-dreary atmosphere with gauzy drapes and spindly birch trees that a true staging of The Seagull would snap into with ease.

But that may be part of the problem. Swetz seems reluctant to fully embrace the play’s modern touches and meta-theatrical elements, and a few symbolic choices — such as seating actors who aren’t in a scene onstage, in profile — are accordingly hard to read. Are these actors waiting in the wings for their next line or just looming in an emotionally resonant tableau? Is the portrait of Chekhov on view a functional prop or just awkward set dressing? Actors port it around the stage like a talisman, but they rarely interact with it in a deliberate or meaningful way. In most scenes, its location seems random, its utility uncertain.

The first act of Stupid Fucking Bird is high on my list of theatrical experiences to date. But aspects of both the script and the Unicorn’s staging ultimately leave the play feeling less like an audacious “new form” and more like Chekhov with crowd work.