As the Troost corridor develops, food is leading the charge 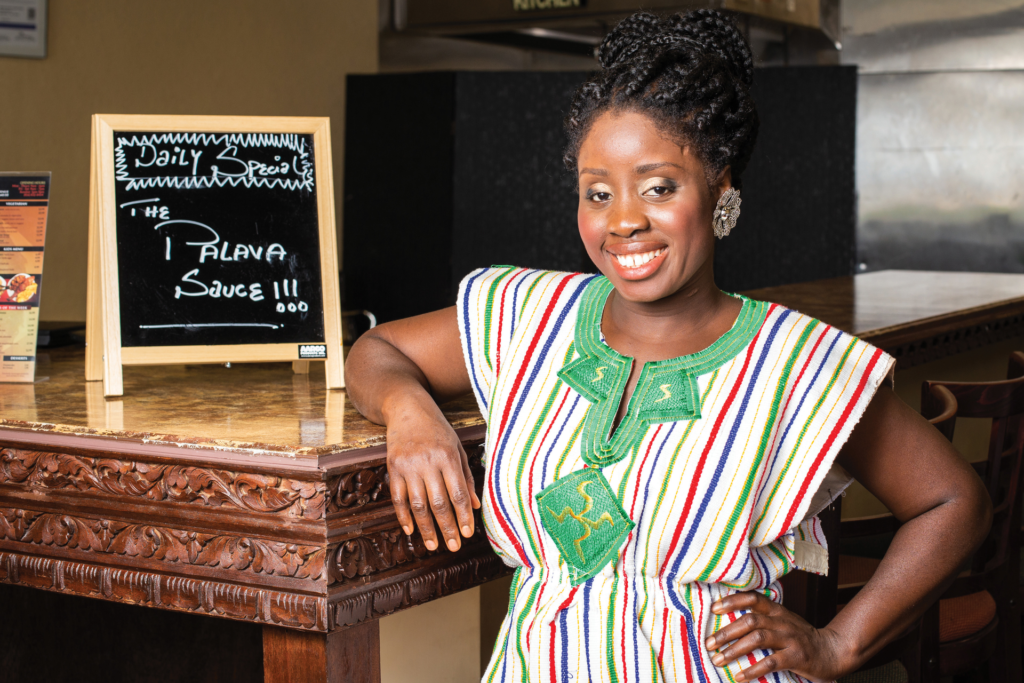 Spend any time around urban planners and you’re likely to hear them talk about the need for “eyes on the street.” They’re quoting Jane Jacobs, the urban activist who wrote The Death and Life of Great American Cities. Jacobs saw eyes on the street as the key to safe, thriving neighborhoods — and she was careful to specify she meant the eyes of residents, not police officers.

But getting those eyes can be tricky in parts of the city that haven’t seen the economic development (or municipal investment) enjoyed by predominantly white areas. How do you inspire people to stay out and stay involved when there’s nowhere for them to go?

On Troost, a few local restaurateurs are trying to supply an answer. Over the past couple of years, the avenue has seen a surge in both foot traffic and new businesses. Boards are coming down from shop windows; neon signs are flickering back to life. And drinking and dining establishments seem to be leading the charge.

Last November, Ruby Jean’s Kitchen and Juicery opened up at 3000 Troost. Two months later, Rashaun and Justin Clark opened their Urban Café on the corner of Troost and 41st. Since then, both businesses have boomed — in the Clark’s case, so much so that they outgrew their location. They’re moving a little further south, but they’re staying on Troost.

A couple other restaurateurs have followed suit more recently, giving residents of the Troost corridor even more options for dining out. In April, Fannie’s African and Tropical Cuisine, the city’s first West African eatery, opened next to the old Urban Café location. And in May, Reggae Kitchen, a Jamaican restaurant, opened along the 55th block of Troost. 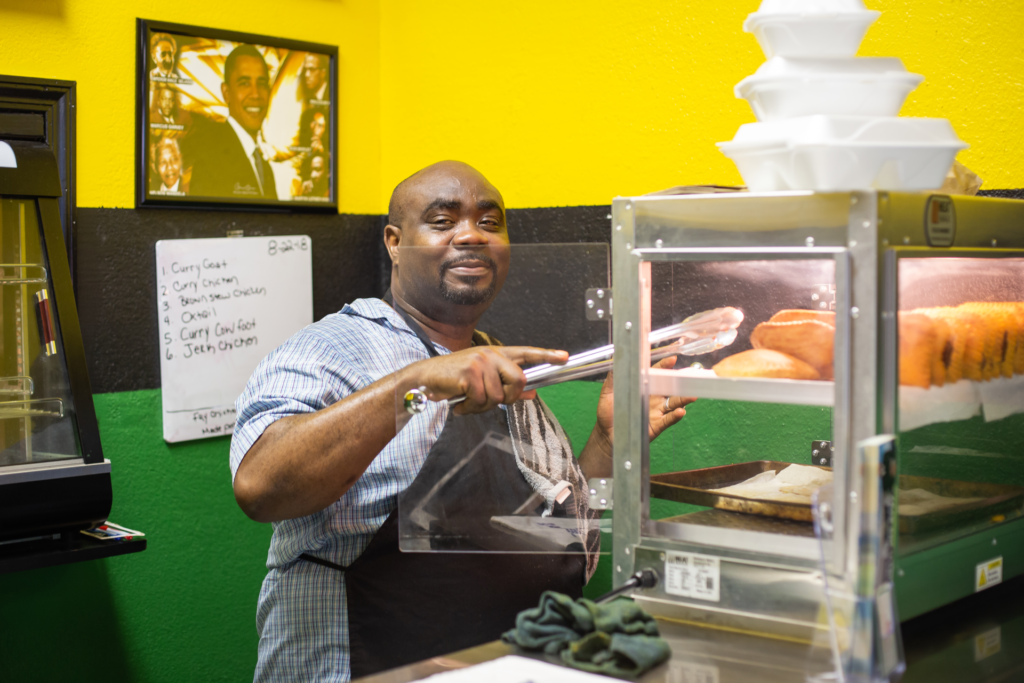 To Cecil Edwards, chef-owner of Reggae Kitchen, Troost was an obvious choice.

“The area is growing — it’s growing a lot,” he says. “Some friends of mine told me it was a good spot and to check it out.”

Edwards, who was born in Portmore, Jamaica, has integrated his home country into every aspect of the restaurant. The walls are painted in the saturated greens and yellows of the Jamaican flag, and a PA system pulses softly with reggae music during dinner service. The dishes are mostly traditional fare inspired by his upbringing — “lots of spices, lots of seasoning, lots of flavor” — but he will adapt the spice level to customers’ tastes. 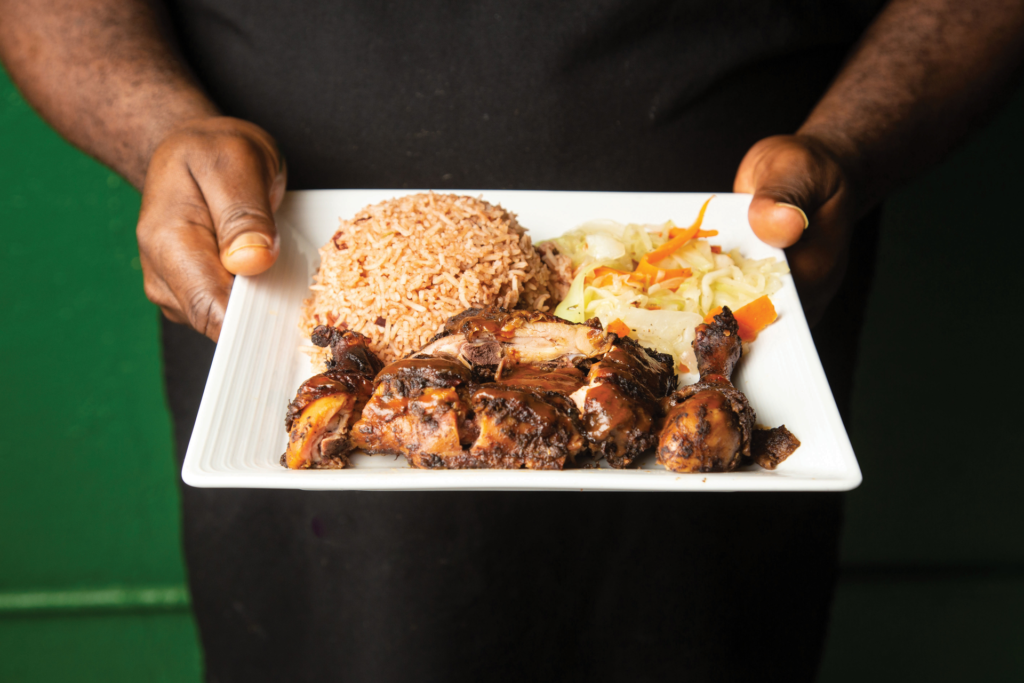 The menu varies (check the whiteboard behind the counter when you come in), but recent highlights include curry goat, jerk chicken (pictured above), and cow foot. If you’ve never tried cow foot before, don’t let the image deter you — Edwards’s trotters are slow-simmered to break down the cartilage, yielding a sticky, glossy stew with concentrated flavor. For the peak cow experience, pair it with the oxtail. This is one of Edwards’s best dishes: the meat is fall-off-the-tail tender, and the sauce is luxuriously silky and rich. A side of traditional Jamaican rice and beans — creamy and well-spiced — makes this stick-to-your-ribs fare.

Although the restaurant has only been open a few months, Edwards says he’s already seeing some of the benefits of Troost’s growing foot traffic. Reggae Kitchen is well-poised to capitalize on it. The restaurant stays open late — until 10 p.m. on weekends — and Edwards is in the process of acquiring a liquor license so he can add a bar (until then, diners can enjoy Jamaican sodas, coconut water, and housemade pineapple and ginger beer.)

When I ask him how he likes it on Troost, he tells me he hasn’t had any problems on the block — except parking. “But they still find ways to come here,” he says with a grin.

A few blocks north, Fannie Gibson has had a similar experience. “The neighborhood has been so supportive,” she says.

Gibson runs Fannie’s African and Tropical Cuisine with her husband, Kelechi Eme. They both have roots in West Africa — Gibson is from Liberia, Eme from Nigeria — but they had a hard time finding the food they loved in Kansas City.

“There’s other African restaurants here, but nowhere that actually had our kind of dishes,” Gibson says. “So we decided to just open one.”

Although the couple live in the Northland, they quickly zeroed in on a location on Troost. If they were going to open the first West African restaurant in town, Gibson figured, they might as well pick a central location.

But some of her friends and customers were skeptical.

“When we first opened, people were like, ‘Oh, it’s Troost, you don’t want to be there too late — you’re going to get robbed or shot.’” She shakes her head incredulously. “It’s not like that. It’s not like it used to be.”

Still, the neighborhood’s old reputation made them cautious. Initially, they planned to close the restaurant at 6 p.m. on weekdays so they wouldn’t be at the restaurant too late. Now that they’ve been in the space for a while, they’re more comfortable. Gibson says that they hope to expand their hours within a few months. 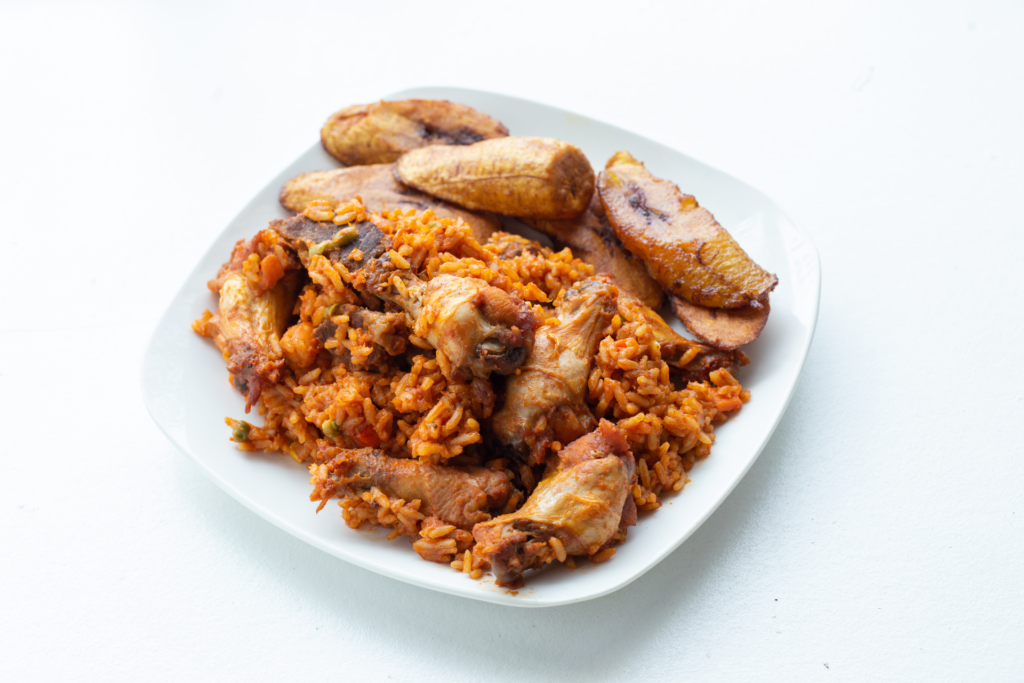 For now, Fannie’s is an ideal spot for lunch or a carry-out dinner. Gibson is a skilled cook and turns out flavorful renditions of staples from several West African countries. The jollof rice (pictured above) is a crowd pleaser — her version of the classic dish combines parboiled, tomato-rouged rice with spices, mixed vegetables, and a choice of proteins. It’s a hearty meal: a little savory, a little spicy, comforting as a hug.

But Gibson likes to steer new customers toward foods they might not have tried before — say, the cassava leaf soup. Order it with fufu, a starchy dough made from plantain flour, and tear pieces off with your fingers for dunking.

Honestly: order it all. The menu at Fannie’s is extensive and replete with high-quality dishes you won’t find anywhere else in Kansas City. When I tried it, the goat-pepper soup had a complex, fragrant broth that cushioned surprisingly tender chunks of goat meat (Gibson’s secret: “I cook it until it’s so soft that even a baby can eat it.”) And the kenkey, a fermented maize dumpling, had the texture of masa and the slight tang of sourdough; it was the ideal complement for a generous portion of spiced fried tilapia served with a ramekin of housemade shito (a pepper sauce that originated in Ghana). Gibson’s shito is cola-brown, with a subtle onion flavor and a slightly fruity heat. It’s hot, but it’s not overwhelming.

That’s deliberate. Although a few of the dishes here are traditionally spicy, Gibson, like Edwards, is happy to modify the spice level for different customers’ tastes. She says she wants to make sure people “from all walks of life” can enjoy her cooking and experience West African cuisine.

I ask her what advice she’d give to a business owner considering a move to Troost.

“I think they should do it,” she says without hesitation. “I tell my friends all the time [Troost] is changing. It’s bringing more people to the city, it’s developing, and I’m proud to be a part of that development.”

She glances at Eme, who’s filling a glass of water behind the bar, and smiles. “We’re very, very happy to be a part of that development.”