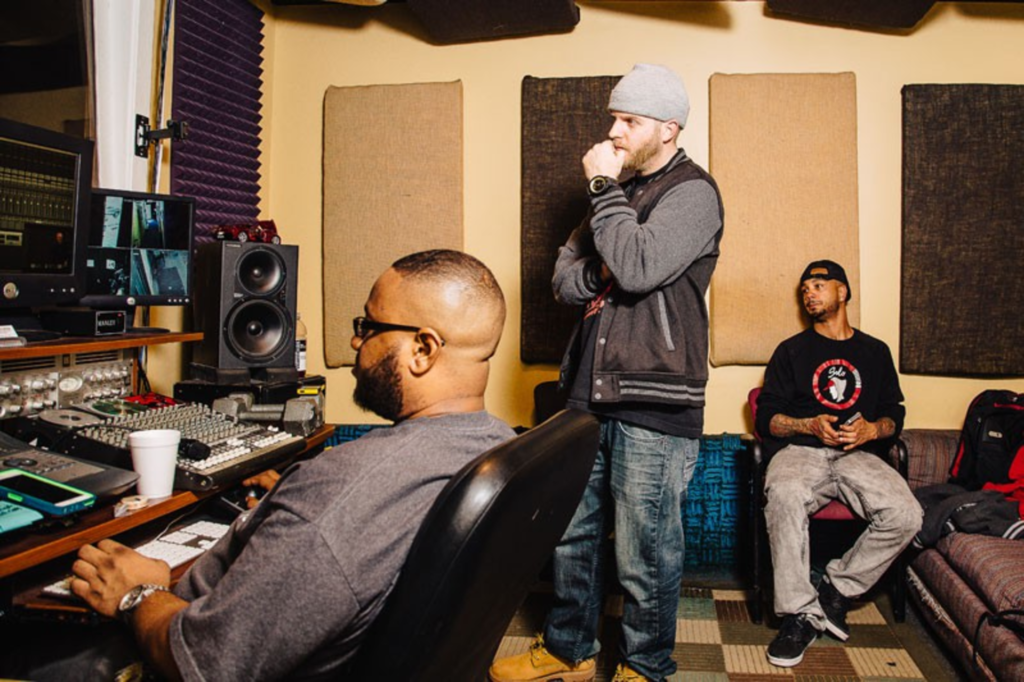 Justin Gillespie, the 34-year-old producer and rapper who goes by Info Gates, stands in front of a microphone inside one of the booths at 64111 Clinic, the West Side recording studio. He clutches a spiral notebook in his right hand and presses a headphone cup into an ear with his left. It’s the final hour of his second day of recording tracks for his newest album, Breaking Bad News, and there’s a just-audible trace of weariness as he spits out the verses for the title track. On the other side of the glass, 64111 Clinic owner Jaz Brewer and the B.Hood member JL, a Las Vegas–via–Kansas City rapper and one of Gillespie’s frequent collaborators, nod along.

They’ve both been shut inside these warm, low-lighted rooms for most of the day. The work is draining, but Gillespie is intent as he listens to the playback and talks with JL. He has made all but one of the beats for Breaking Bad News, and he has been waiting seven months to hear them getting laid down. This is a fulfilling day for him.

“JL lives in Las Vegas, and we’ve been talking about it [this album] for a long time, and I just got impatient,” Gillespie tells me. “I was like, ‘Dude, I’m booking you a flight, and you’re gonna stay in my house, and we’re gonna write raps for a week.’ We’re pretty much done writing, and we’re trying to get it done by February. Our goal is to plan a tour by May.”

While JL goes over “Breaking Bad News,” I sit with Gillespie in the sound booth. He’s perched on a bar stool, twisting a bottle of Vitaminwater between his hands. Even when he’s having a casual conversation, Gillespie speaks at a pace that seems at least three times faster than anyone else talks. The forthcoming album, he explains, is a mash-up of metaphors, lifted in part from the TV series Breaking Bad.

“Me and JL were both really big fans of the show, and so, when we were talking about this project, it just came up,” he says. He views the partnership goals that he and JL have as similar in spirit to Walter White’s — though far less dramatic and illegal. White, a brilliant chemist, was determined to leave his family a legacy won by manufacturing and selling his ultrapure crystal meth; Gillespie and JL want an undeniable legacy, too, by way of their music.

“The tie there is that we don’t really see ourselves being able to make a living any other way, and we just want to make the best product we can make,” Gillespie says. “Obviously, it’s completely different situations, but there are some parallels. We rack our brains day after day, thinking about how to make this work.”

The “bad news” part of the title, he says, was inspired by conversations he has had with his mom.

“My mom is always like, ‘I wish you would make more positive music and talk about good things,'” Gillespie says. “So I turned my mom onto Janelle Monáe, and I love her music. She’s positive and uplifting and hopeful, and I racked my brain about it — like, why can’t I make music like that? And I think a big part of it is that I talk about what I see and what I feel, and most of the time that’s bad shit, news stories and terrible things.”

That may be true, but lately, Gillespie has a lot to be happy about. When local rap duo CES Cru signed to Tech N9ne’s Strange Music label in January 2012, Gillespie — who has been producing beats for CES Cru since 2006 — found his profile elevated. Last May, Gillespie joined CES Cru on tour as its opening act, an experience that took him across the nation to 55 cities in 60 days. It was the first time that he had managed to break out of Kansas City, and finding that his music had fans in places like Seattle and Los Angeles was the affirmation he had needed.

“Once they [CES Cru] got signed, cooler things started happening for us,” Gillespie says. “We just needed someone to hear it [the music] and be as excited about it as we were. I think that’s where a lot of people start to filter out of making music because they don’t feel like anyone’s as interested in it as they are. And that boosts your confidence when talented people, great-minded people — like Tech — like your music. I think we all needed that. We’d been doing shows for almost 10 years, and it was just getting really hard.”

Gillespie doesn’t sound much like the type to give up easily. He admits that there were moments when he wanted to, when he thought about starting over in a different city — somewhere with a bigger market, such as Austin or Denver. He shifts the water bottle from hand to hand as he gives me his reason for remaining in a city where, he knows, it’s tough to be a rapper.

“The people made me stay,” he says. “It’s always the people that make me stay. My mom’s here, first of all, and she’s damn near the only family I have left. My best friends are here. CES Cru is here. I was dying to get out of Kansas City and do shows in other places. We needed to get out of the city and see if people could like what we do, but you have to know people.”

He goes on: “It’s just now that CES Cru is shining on Strange and I’m able to book shows for myself in other states. That wouldn’t have happened if I’d left. There’s a long way to go — I don’t think any of us have ever felt super-duper achieved or anything — but for the first time, we’re seeing something happen.”