The spirit of Killa City is no Norman Rockwell 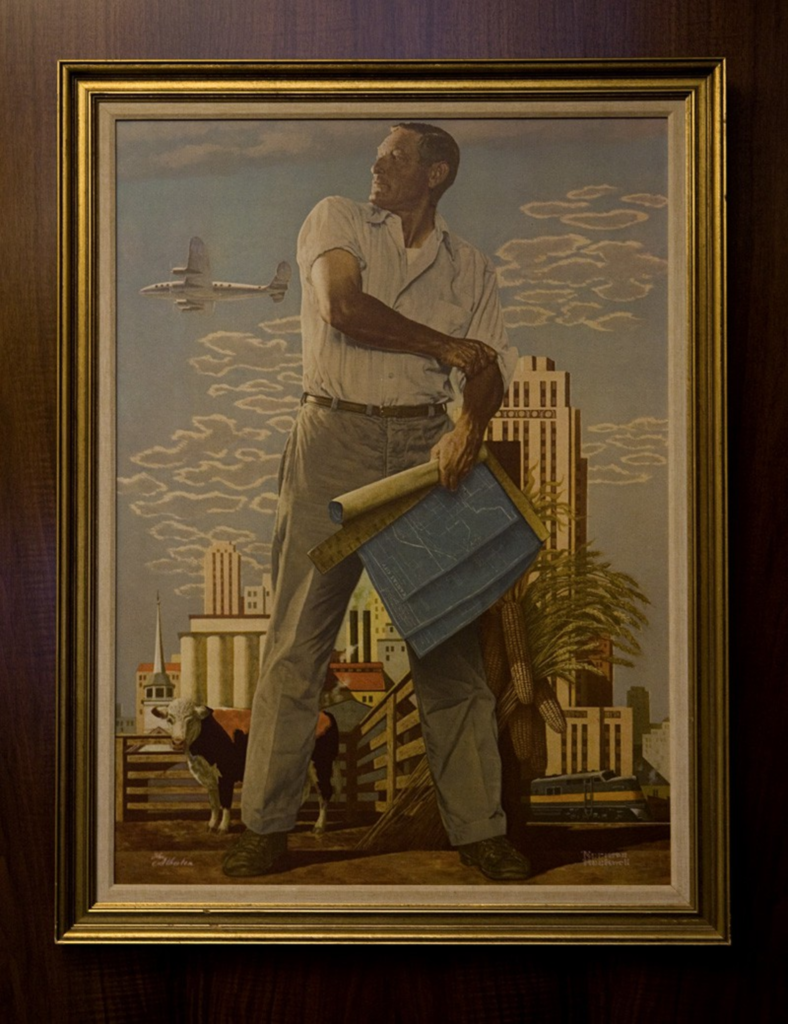 First, about this week’s cover.

Some of you know the story of Norman Rockwell’s “The Kansas City Spirit.” For those who don’t, Kansas City Star reporter Brian Burnes recounts it well in his book High & Rising: The 1951 Kansas City Flood. After the city was swamped by the flood of 1951 and reports of the devastation spread around the world, Hallmark founder Joyce Hall was among those city leaders who were especially troubled about damage to the city’s image. He wanted the world to know that the city was still open for business.

Hall knew Rockwell, who offered to help. Burnes writes that on August 7, 1951, Hall and Rockwell, along with City Manager L.P. Cookingham and a Star reporter, met at a restaurant in the Municipal Air Terminal. “This is the story of a courageous city fighting back after a terrible blow by a giant flood,” Hall told Rockwell. “This is a story of a big man rolling up his sleeves and going to work — without whimpering and crying.”

Burnes writes: “The subsequent canvas, finished the following February, incorporated Hall’s suggestions literally. Rockwell’s lone figure, set against a skyline rendered by Rockwell colleague John Atherton, faces his fate with upturned chin and a determined rolling-up of his shirt-sleeves. Hall later distributed 20,000 copies of the painting in a brochure that further detailed the ‘Kansas City Spirit.’ Today, the original painting hangs in the Hallmark Visitors Center.”

City boosters like to pretend that this spirit still exists, though reality tells a different story.

President George H.W. Bush had to stretch pretty hard when he invoked the painting in a crime-fighting speech that he gave to the city’s law enforcers at the Music Hall back in 1990. He praised the city’s fabled spirit — “restless, idealistic, determined … a community spirit, a spirit that emphasizes the value of collective well-being” — and then described the painting, thanking God that the “Kansas City spirit” was still alive “because in recent years, it’s not the convention hall that’s caught fire but the streets themselves, burning with a new form of pain called crack and crackling with a burst of gunfire not heard in Kansas City since the outlaw days of the Old West.”

He went on to praise us for refusing to surrender to the drug plague. “You took back what’s yours — took back your kids and took back your streets. It began like the spirit of Kansas City, when one man rolled up his sleeves and stepped forward with a blueprint — a blueprint that’s become a model for our cities, an inspiration to people everywhere.” That man, Bush said, was Alvin Brooks, then of the Ad Hoc Group Against Crime, later a city councilman and mayoral candidate. Bush went on to praise Brooks and Ad Hoc for the work they were doing in the inner city and then wound his way around to some crime bills pending before Congress, before finally returning to Rockwell and arguing that the man in the painting “always faces the same way — forward to a brighter tomorrow, forward to the future ahead.”

The version of the Rockwell painting on our cover this week, we think, shows the real — wounded — spirit of Kansas City. So here’s some background on the story it illustrates.

The project that would become “Killa City” started in the fall of 2008. People were growing nervous as the tally of homicides in Kansas City, Missouri, approached a year-end total of 126 — just one short of the count in 2005, the decade’s most violent year. We wondered how to humanize the carnage. We thought about running photos and short profiles of the victims, but we realized that we were too late. The task of tracking down victims’ names, faces, circumstances of deaths, family members — and reporting on police progress investigating each — would be impossible to finish by the end of the year. We abandoned the idea, but we also started planning for 2009.

It was safe to assume that this year would be just about as bloody. And we had a relatively new tool that would help us report on the city’s homicides as they happened. We had started our news blog, Plog at pitch.com, in April 2007, and by last December it was a well-established news source separate from the print edition — but it was generally a loosely organized group effort. At the beginning of this year, we put a full-time staffer in charge of the Plog: Justin Kendall, who had been a staff writer with the paper since 2005.

Kendall decided that Plog would cover each of this year’s homicides. He reported the news of each death, without commentary, based on police reports and other publicly available information. He posted photos of victims and suspects if we could find them. And he included a Google street view. At first, he was simply taking advantage of Google’s technology to make it easier for readers to visualize the location of a crime. But one thing quickly became apparent: It’s one thing to read a street address in a crime report, but it’s another thing to look at a photograph of the house, the sidewalk, the block. We immediately saw our city in a new and haunting way.

Kendall’s write-ups were straightforward, but we allowed ourselves one Pitch indulgence: We called the project Killa City. We used the street slang partly because that’s what some people were already calling our town and because we wanted something provocative — something that readers who weren’t immersed in the violence might actually pay attention to. We braced for a backlash, but other than reaction to the name, we didn’t know what to expect.

“Rodney Kemp, a 37-year-old black male, is 2009’s first homicide. Police found him last night at 7:30 in front of 7430 College Avenue with ‘life-threatening injuries’ to his upper body. He was transported to a hospital where he later died.

“According to case.net, Kemp lived at 7429 College Avenue, which was listed as his address when he pleaded guilty in 1999 to a misdemeanor charge of operating commercial equipment without a license, for which he paid a $300 fine. Updates when we have them.” (Later, after records adjustments in the medical examiner’s office, Kemp was officially ruled the fourth homicide of 2009.)

Few Plog readers seemed to care about the name. Instead, Killa City took on a life of its own — and that’s the story Kendall tells in this year-end wrap-up. For him, the project soon expanded; Killa City wasn’t just Kansas City, Missouri — it was also Raytown; Kansas City, Kansas; and Overland Park. For a while, Kendall says, it seemed like a new homicide announcement awaited him every morning when he turned on his computer.

Sometimes he began to think that he was becoming desensitized. “Reading news stories, there’s this feeling of ‘It can’t happen to me,’ ” Kendall notes. “But then I’d look up a victim’s Facebook page or read a comment from a loved one. People didn’t feel distant anymore. You see the reactions from people who loved them, and you see pictures of them when they were alive, laughing with their friends or whatever, and it just became so real.”

At some point in a project like this, formal journalism training teaches you to call some expert for an interpretation of what it all means or ask law-enforcement authorities what they plan to do about the problem. We’ve done a little of that, and we’ll post the results online throughout the week, in Killa City Extras. But there’s a reason that we didn’t include those sorts of quotes in this week’s cover story. Very simply, we think the victims, the killers and their loved ones tell the real story.