The spirit of J.P. Morgan 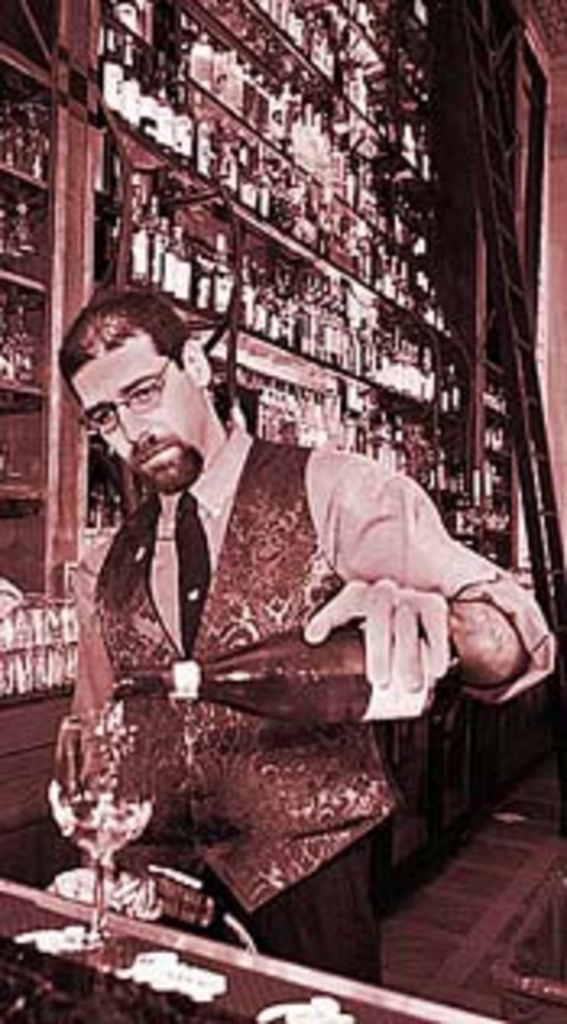 Luckily for the new Kansas City restaurant that adopted J. Pierpont Morgan’s name, the image associated with the powerful banker is one of good fortune and a comfortable lifestyle rather than that of the actual millionaire, who was a bulbous-nose, overweight, womanizing financial genius. Pierpont had a hearty appetite, though. And though his actual connection to Kansas City is limited, he did pass through the rough-and-tumble young boom town in 1869 on a journey across the western plains by train in a plush Pullman Palace car that had all the luxuries of home — except decent food.

“The travelers brought along sandwiches and cakes,” wrote Morgan biographer Jean Strouse, “and Pierpont rustled up fresh provisions whenever he could.”

Pierpont wouldn’t have to rustle up much today, 131 years later, in historic Union Station, which has plenty of provisions but no trains. At Pierpont’s (300 W. Pershing), the spirit of wealth, power, and history reverberates through the dining rooms, both public and private, making the restaurant’s choice of name a perfect fit.

If things had worked out somewhat differently, Rod Anderson (the media-savvy entrepreneur behind the two Hereford House steak houses) would have called his new, expensively mounted restaurant, located just off restored Union Station’s Grand Hall, the “Union Pacific Grill.” But the still-active train corporation wasn’t inclined to lend its name to Anderson’s tony seafood concept, so he chose to name the place after Morgan, because the well-fed millionaire not only had been involved in financing steel and railroads but also had a reputation for polishing off a good dinner or two in his day.

One might wish that big-spending J.P. were still around to generously pick up the dinner tab at his namesake restaurant; the a la carte menu is pricey. And even if chef Todd Brooks’ menu hasn’t yet caught up to the dazzling good taste of Pierpont’s interior, he’s on his way.

But for now, the space is showier than the food. Anderson and his “interior consultant” (former restaurateur Paul Robinson) have turned what once was the women and children’s lounge on the station’s main level — with its 25-foot ceilings and marble floors — into something rather extraordinary.

This main room is so spectacular, you can envision it as the set of an MGM musical (like the railroad-theme The Harvey Girls), especially the well-stocked, mirrored bar, which rises to dizzying heights just off the entrance. It’s a noisy, fun, and vibrant space, with the massive room divided only by a stylish partition, so sitting down to eat on the “dining” half of the space means coping with the echoes from the other side.

Even after being tucked into a cozy banquette (upholstered in brown leatherette and vaguely resembling a train compartment) an intimate conversation can bounce all over the room’s hard surfaces. On one visit, a nearby table of well-lubricated suits was so boisterously loud, it was like having dinner smack in the middle of a David Mamet play. (It was, however, possible to overhear some good stock tips.)

Chef Brooks is still tinkering with some of the restaurant’s signature dishes. Although there are some excellent dishes to be ordered and superb wine to be sipped, after the restaurant’s third month, there still isn’t a decent piece of bread to be found.

“We haven’t instituted our bread program yet,” announced the servers on two separate occasions, each using the clipped tones of a stockbroker describing a failed corporate merger.

According to a chatty manager in a startlingly splashy tie (the servers are more demurely dressed in dark blue shirts and black aprons), the “bread program” will one day involve a breadstick “especially created for us.” But on an early visit, the bread that accompanied the salads was an ordinary breadstick and on another several weeks later, a ridiculously salty roll. On a third visit, the imported crusty roll was dotted with sunflower seeds but still was salty. It may sound like quibbling, but if you’re going to spend some dough on dinner, the bread should be the kind of manna you can invest some interest in.

Chef Brooks has struck gold, however, with his appetizers, which are heavy on the seafood choices and have evolved dramatically from the opening weeks. Gone are the littleneck clams and the terrine of smoked trout. In their place are pan-roasted mussels in garlic and sherry ($8.50) and chilled, paper-thin slices of ahi tuna eaten with a jolting wasabi cream and crackers ($9.50).

Thank goodness the best appetizer on the menu got a reprieve: a delicious plate of light and crispy flash-fried calamari, tucked into a papery sheath of fried spinach ($6.95). The boring lemon-garlic mayonnaise, which tasted neither lemony nor garlicky enough, has been successfully replaced by a smoky tomato beurre blanc that has more zing. A new addition, fingers of sliced portabella mushroom dusted with cornmeal and fried (in “roasted fried butter,” the server said straight-faced), is served up with a cream sauce vaguely flavored with horseradish and a ponzu dipping sauce, a salty soy-sesame concoction that sounded far more exotic than it tasted ($6.95).

It’s doubtful Union Station’s first restaurateur, Fred Harvey, would recognize the sophisticated updating of his Westport Room salad ($5.25), but it’s a class act: The traditional wedge of iceberg is served in a puddle of a cold and delicious lemon-parmesan dressing and is adorned with fried shards of bacon, chives, and “grilled Lyolene croutons,” a haughty description for an average crouton. The Knife and Fork Caesar ($4.94) is a stalk of romaine simply plated up and neatly dressed with the real Caesar ingredients, including eggs and anchovies. The house salad, an assortment of more exotic greens lightly tossed in a piquant sherry vinaigrette is by far the best bargain ($3.95) and absolutely delicious.

Although Rod Anderson’s claim to local restaurant fame is the juicy steaks (and reasonable prices) at the Hereford House, only two steaks appear on the Pierpont’s “manifest” (the creative alternative to a menu here). The $24.50 pan-seared Kansas City Strip Steak was a disappointment: “I suppose J.P. Morgan would have sent this back,” grimaced my dining companion, sullenly sawing through a tough and flavorless cut of loin, hardly enhanced by the lovely Pinot Noir sauce surrounding it. Being a classic restaurant martyr, he did not send the steak back (“It’s too much trouble”) but nibbled halfheartedly on the mound of mushroom mashed potatoes and the tiniest dish of “baked macaroni and brie” ($4.95) that was rich and salty on a previous visit, sweeter and more watery on the later one.

In addition to the grilled filet mignon (far better than the strip; $25.95), there’s a tender and juicy pan-roasted pork chop, all sweet and sticky in a splash of fruit chutney sauce ($17.50) and more of those paste-color mushroom mashed potatoes. I would buy stock options in the restaurant’s best signature dish: a spit-roasted duckling, artfully presented, its dark, crackly crust drizzled with a glossy sauce, not too sweet, flavored with Grand Marnier ($18.95). It was all so luscious and tender, I couldn’t resist pulling the bones right off the plate to devour every last bit of glazed meat and crispy skin.

I had equally good luck on the more extensive seafood side of the menu, relishing a flaky, featherlight Chilean sea bass ($22.95) served with a beurre blanc or a much zestier green chile sauce. (I asked for both.) The dozen or so offerings include the real J. Pierpont Morgan’s favorite sort of luxe fare: lobster (a grilled 9-ounce tail basted in butter; $25.95). This restaurant clearly hopes to give the more established seafood joints in town — such as the venerable Bristol, whose style (also created by Paul Robinson) is evoked with far more glamour here — a run for their money. But will local patrons, who once flocked to Union Station for the more lowbrow Colony Lobster Pot, put their money where their mouths are for $21.95 lemon sole roulade (fattened up with mushrooms inside and blanketed with a shellfish cream) or a $19.95 salmon in a spicy Chinese mustard glaze?

I would, citing a spectacular dish of fat, firm scallops ($17.95) as the best justification for giving Pierpont’s seafood the highest rating. Tucked into a parchment bag with julienne vegetables and a dollop of saffron-dill butter, the scallops are roasted until the parchment browns, the distinct flavors have melded into a fragrant and delicious broth, and those juicy scallops are nothing short of heavenly. The wine list is fine, offering primarily California vintages (with a few Italian and Oregon labels too), mostly in the reasonable $17 to $30 range.

The dessert selection certainly could be more interesting. There’s the ubiquitous crème brulée, a trio of sassy sorbets, and (yawn) carrot cake. Chef Brooks has been known to rhapsodize over his kitchen’s novel approach to carrot cake (also the longtime signature dessert at the Bristol), which is served, in this incarnation, toasted and coated with a white chocolate cream cheese ($4.95), but warm and crusty does not a better carrot cake make.

Surely with J.P. Morgan’s name attached to this venue, the offerings might have included something far more extravagant than a signature slab of carrot cake. Baked Alaska, perhaps? A chocolate something dusted with gold leaf? Some additional tinkering with the menu is in order before the stock here rises.

(Based on a complete meal for one,