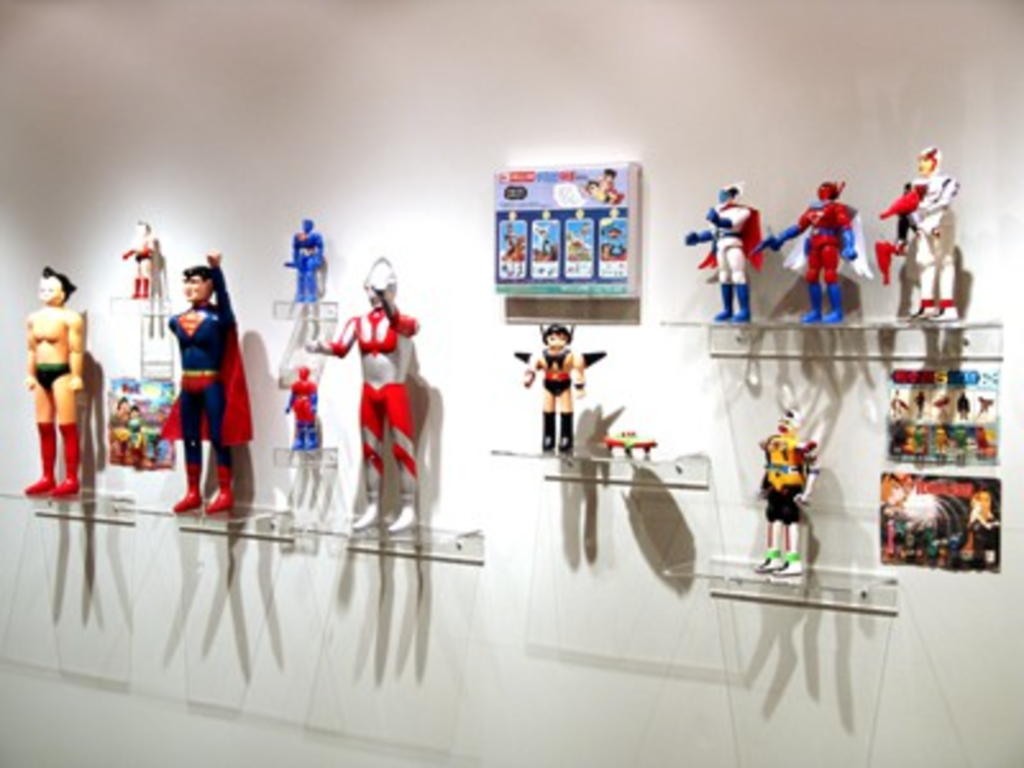 Toys are never just toys. The playroom remnants of childhood embody the cultural and social mores from which they emerge and suggest a multitude of meanings. Far from benign objects, they function as stand-ins for experiences and memories and retain their symbolic power.

The pieces in Toy Stories: Souvenirs From Korean Childhood, now at the Spencer Museum of Art on the University of Kansas campus, date from the 1970s and ’80s. At the time these toys were produced, the Korean peninsula was not far removed from the three-year period of war and division that began in 1950. The exhibition, organized by New York’s Korea Society from the collection of cartoonist Hyeon Tae-Joon, reminds us that the South Korea we now regard as a neutral, highly developed country was, only a few decades ago, a deeply militarized society that performed monthly civil-defense drills and imposed deep cultural restraints on even its tiniest citizens. For the children of that Korea, conformity and discipline were values reflected even in playthings.

The exhibition’s toys are divided into rough categories: Action Figures, Robots, Military Figures and Girls’ Toys. In each, the pieces — including cheap miniature versions of regular-sized toys — demonstrate the influences of Chinese, Japanese and U.S. consumer and popular culture. Robots were especially pervasive in Korean toy production in the 1970s. These machines fought patriotic battles (as, perhaps, their human inventors had) and demonized North Koreans as aliens. Other military toys included guns and war games, reminding us that the active space between fantasy and real life leaves room to explore conflict and violence.

Gender roles figure prominently into the toys produced for girls. Paper dolls were not only inexpensive and plentiful but were also often included on the back covers of schoolbooks. In what, at first glance, seems anomalous, American movie characters appear among the paper dolls. On one sheet, E.T. can be dressed in tiny costumes.

By the late 1970s, Barbie had arrived in South Korea and introduced her impossible standard of “beauty” to an entire new country, having already made a generation of American girls insecure about their looks. (South Korea was also the center of manufacturing for Barbie dolls.) Other figures — such as Princess Aurora, from the 1980s — offered similarly confusing ideas of beauty and power. Knowing that these blond, blue-eyed figures were made for Asian children is jarring, even depressing, considering the beautiful little girls who played with them.

The influence of Japanese animé figures heavily on these Korean toys. Primary colors, crisp lines, simple contours and futuristic-looking modernism characterize much of what’s on display here. Sleek cars reflect the television show Speed Racer, demonstrating the cross-promotional muscle that powers global toy production. Comic books from the late 1970s and the 1980s include the characters Steve Austin (the Six Million Dollar Man), Black Eagle and the Monkey King. The latter, from an ancient Chinese story, was reborn in a late-1960s animated series that ran throughout Asia and finally became a plastic action figure. Other men of action include Superman and the Japanese Astro Boy and Ultraman.

Complementing the smallness of many of the toys, the exhibition space is diminutive. The installation designers have punctuated two of the walls with red, white, blue and orange stripes that offer a punchy visual counterpart to the objects. The toys themselves are smartly arranged salon-style, generating a poetic tsunami of primary colors, visual pleasure and childhood memories swirling around Korean political, economic, military, social and cultural histories and ideologies. All of that in a toy.