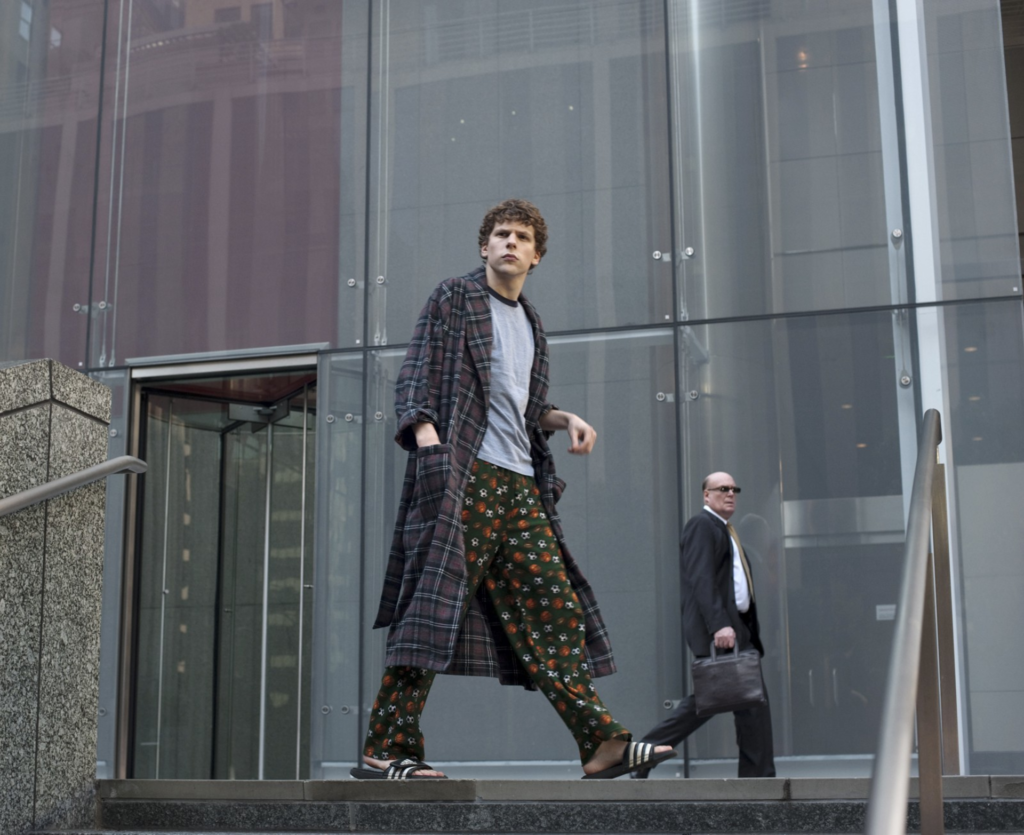 Everyone will opine (and Tweet) on this Scott Rudin–produced, Aaron Sorkin–scripted, David Fincher–directed, universally anticipated tale of Facebook’s genesis and founding genius — at least until something sexier comes along.

The main talking point is the movie’s unlovable protagonist. As written by Sorkin and played by Jesse Eisenberg, Facebook mogul Mark Zuckerberg is a character far more compelling than his story. Insensitive, paranoid, humorless and driven, Zuckerberg may not be the year’s most irritatingly arrogant cine sad sack, but he is the most formidable.

Eisenberg plays Zuckerberg as the dog in the manger, keeping the audience at arm’s length while ferociously guarding his screen space against all comers. The first thing we learn about the ungainly Harvard sophomore, yammering away at his date (Rooney Mara) while hunched over a table in a crowded Boston bar, is that he scored a perfect 1600 on his SATs. The next thing is that he’s obsessed with gaining entrance to one of Harvard’s ultra-exclusive final clubs.

This scene ends with Zuckerberg driving the fresh-faced co-ed to break up with him then and there: “You’re going to be successful and rich. But you’re going to go through life thinking that girls don’t like you because you’re a tech geek. I want you to know, from the bottom of my heart, that won’t be true. It’ll be because you’re an asshole.” Her name is Erica, but in the context of The Social Network, it should be Rosebud.

Wounded, Zuckerberg retreats to his dorm room and, after insulting the girl personally on his blog, avenges himself on her gender by instantly (and drunkenly) devising a website to rate all Harvard women by hotness. The site draws so much traffic from his fellow students that it crashes the Harvard computer system.

Erica is not impressed. But others are, notably a supercilious pair of upper-class upperclassmen, the Winklevoss twins (both played by Armie Hammer). The golden boys invite Zuckerberg into the foyer of their final-est of final clubs and enlist him in their scheme to create a Harvard-only version of then-­reigning social-network sites such as MySpace and Friendster; outsider Zuck appreciates the appeal of Crimson exclusivity and, funded by his dorm mate Eduardo Saverin (Andrew Garfield), runs with it. Facebook is born.

The Social Network‘s first act is its best — a hellishly precise youth movie rattling along on a clamor of computer jargon. Fincher’s Harvard is at once cold and cozy, electric with possibility and oppressively organized according to arcane internal castes. Suffering through “Caribbean Night” at his déclassé Jewish frat, Zuckerberg tells Saverin that they’re taking “the entire social experience of college online.” Facebook.com will be a virtual final club with them as presidents.

It’s enjoyable to see Zuck blithely confound a succession of high-powered lawyers once the bamboozled Winklevosses file suit. But here, the narrative stumbles. Saverin eventually sued Zuckerberg as well and, drawing on Ben Mezrich’s novelistic history, The Accidental
Billionaires, itself largely dependent on Saverin’s story, Sorkin flashes forward to the discovery processes of both suits. The depositions prompt a succession of clumsy chronological, legally approved flashbacks: Zuckerberg leaves Harvard for New York and then, under the Mephistophelean influence of Napster founder Sean Parker (Justin Timberlake), for Palo Alto. It’s there that Zuckerberg takes Facebook galactic — half a billion users and potential movie-ticket buyers. But once the charismatic Parker appears, Fincher and Sorkin cede the film to him, along with his patsy, the pathetically duped Saverin.

Zuckerberg grows increasingly enigmatic. It’s asserted throughout the film that Zuckerberg is driven by something more than a desire for money or sex or even a monstrous sense of spite. He thinks he wants to be cool but, like everyone else, he just wants to be loved (though he doesn’t know it). Corny as that is, the film’s nadir comes when Zuckerberg’s pretty young lawyer comforts him (or us) with the mealy-mouthed observation, “You’re not an asshole, Mark. You’re just trying so hard to be one.”

As dramatized in The Social Network, the story of Facebook’s founding is not unlike that of any large corporation — megalomania rewarded, sweethearts trampled, partners buggered. Zuckerberg’s real achievement, however, was something more mysterious than a 21st-century MGM or Standard Oil; he manufactured intimacy through the creation of a parallel, personalized Internet offering an ongoing second life in a virtual gated community. True to its moment, The Social Network is less interested in mapping this new system of human interaction than psychoanalyzing it through its quintessential user: Zuckerberg.

Like any form of entertainment, Facebook succeeds to the degree in which it compensates people for something missing in their lives — a lost sense of neighborhood or extended family or workplace solidarity. The key insight in The Social Network is that Zuckerberg, not particularly friendly and not at all prone to sharing, created his virtual community for the same reason that Kafka’s self-starved Hunger Artist found his métier: because there was never any food he liked to eat.