The Royals went out low, but there’s reason to hope in 2018 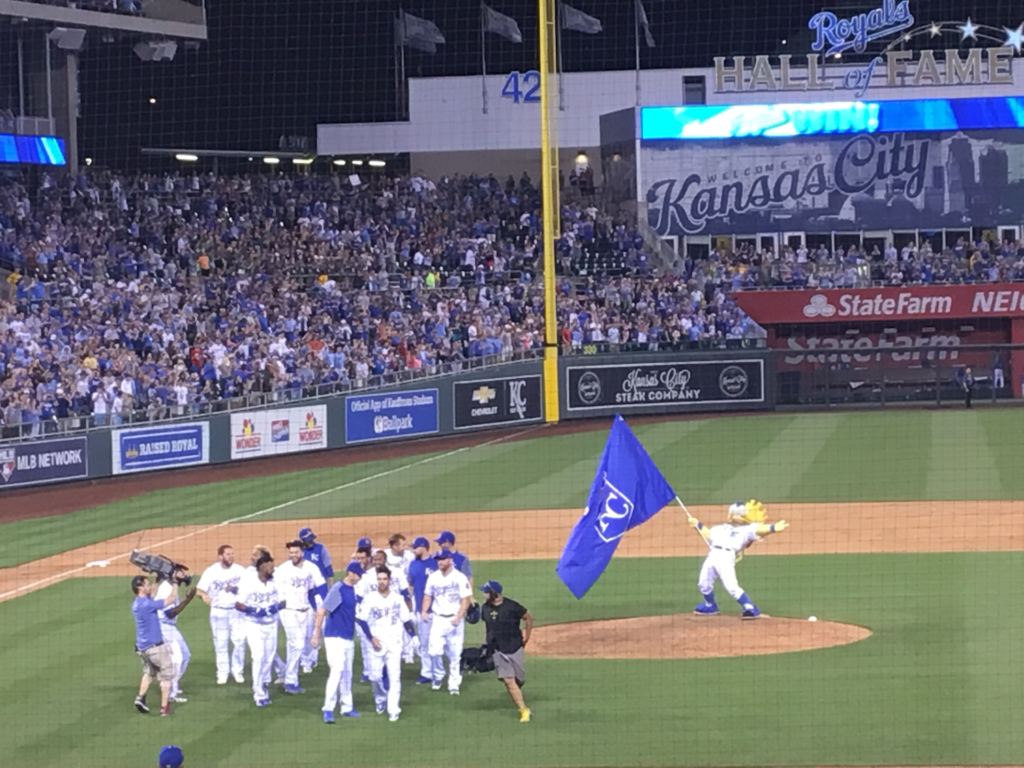 The bittersweet thing about glory: It comes and goes, almost as quickly as a breath. Kansas City Royals fans know this better than most, having seen more than their share of stars depart for bigger markets — a scenario that’s about to repeat itself, in an offseason that started too soon.

On September 26, the Royals were officially eliminated from postseason contention, surrendering the second wild-card spot to the Twins. This is the same Minnesota team that swept KC to open the season, kicking off a dreadful April during which the Royals lost twice as many games as they won. In hindsight, the season was already over then, before the tulips had even bloomed. “No team comes back from that,” my husband reminded me on an almost daily basis, the chorus to my constant, naïve verse: “It’s still early.”

Long after the rest of the flowers came and went, I wasn’t the only one who refused to give up hope. To a city full of people who watched this team coalesce and rise from baseball’s gutter to the sport’s highest ranks, it would have been sacrilegious to admit defeat before the last numbers were crunched. This Royals roster was stocked with World Series champions, after all — a core of players who broke a 30-year postseason drought one chilly September night and went on to make history. That true folk tale — the improbable comebacks, the late-game heroics, the victory parade that turned the whole city blue — is permanently etched into the memory of anyone who was lucky enough to witness it.

So even if 2017 wouldn’t bring another parade, the season was to have been a last hurrah for that beloved core, a victory lap. Instead, the Royals sputtered to a losing record. This is not how it was supposed to be.

I was at the second-to-last game, on Saturday, and when manager Ned Yost pulled Alcides Escobar, Lorenzo Cain, Eric Hosmer and Mike Moustakas, the mood in the stadium was one of bittersweet finality — intense gratitude for what these players have done for our city, tinged with regret at this year’s missed opportunities. And then we tried to make the most of the rest of the day’s play, glimpsing what the team could look like next year, with Raul Mondesi, Paulo Orlando, Brandon Moss and Cheslor Cuthbert rounding out the roster.

This winter will likely see the departures of Escobar, Moustakas, Cain and Hosmer, or some combination of those new free agents. Their Gold Gloves, All Star game appearances, MVP awards, home-run records, diving catches and epic haircuts have defined baseball for a generation of Kansas Citians and attracted a legion of new fans. They and their teammates have given everyone here another reason to feel proud of their hometown — and a new reason to talk to strangers.

During the 2015 postseason, I was at a casino one night, yanking a slot machine, when I got into a passionate discussion with the man sweeping the floors about Wade Davis’ narrow save the night before. I can’t remember the specifics, but it was probably one of those heart-stopping innings when Davis loaded the bases with no outs and still didn’t allow a run, as though he’d gotten bored and needed a more dramatic way to demonstrate his mastery. “I think the whole city was holding its breath,” the man said. I agreed. A couple of weeks later came our collective champagne-soaked exhalation following that World Series victory.

For decades, losing felt familiar here, something we all slipped into with the easy comfort of a favorite bathrobe that has dodged the laundry for an extra month. (Remember that time in 2005 when the Royals were so bad they didn’t even take a team photo?) Even during those lousy years, though, some fans hung on.

One was my dad, who listened to every game on his transistor radio while doing yard work on hot, sticky summer afternoons. I was just a kid, but I picked up on the flickering — and at times irritating — sense of hope that remained even as the team endured loss after loss. I found comfort in Denny Matthews’ gritty voice, the aural equivalent of a baseball skidding just foul in the dirt. I didn’t fully grasp the complexities of the sport, but home runs were easy to understand. One afternoon, while riding in my dad’s El Camino and listening to another Royals loss, I said, “The next batter is going to hit a home run.” My dad laughed at me, but that ball found its way over the fence, and I became a lifelong fan. In that moment, the humid air vibrated with possibility. I waited 20 years for baseball to give me that same sense of spine-prickling wonder.

The player who did it for me this season was Whit Merrifield, who had such a fantastic year that if he played in New York or Boston, he’d likely be a household name. The 28-year-old rookie came to the field each day with the same intensity that characterized the whole team in 2015. Before getting called up, he said he watched the Royals in the World Series and hoped he’d one day get the chance to play in the postseason with this team. Today, we all know that’s not going to happen — at least not with the same bunch of guys.

That’s OK, and this isn’t my tear-stained farewell note to Moose, Hoz, Esky and Lo Cain. This is my love letter to Whit Merrifield — my heartfelt thanks to him for helping make this season interesting even when it wasn’t relevant, for playing great baseball even when a shitty ending was in sight. He’ll be back next year, of course, and he’ll at least have good company in Salvador Perez. I’ve accepted that it will take time for the Royals to be contenders again — but this team has shown me that, sooner or later, if I keep expecting something amazing to happen, it will. And it will be worth waiting for.