Ch-ch-ch-ch-changes — The Revolutionists, at the Unicorn, goes for a round 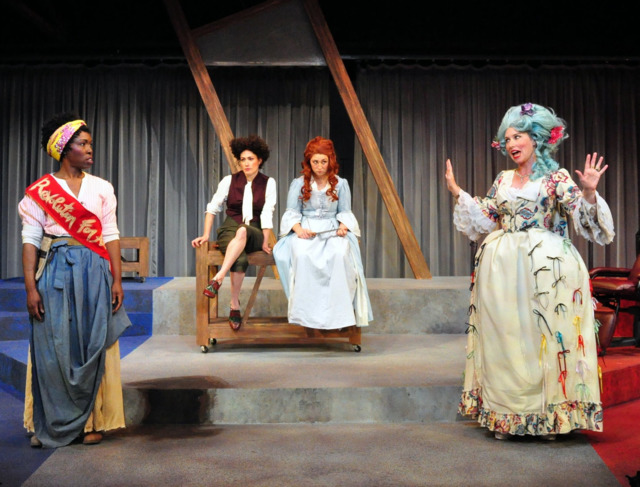 Liberté, égalité, fraternité — France’s national motto was given voice during the French Revolution. But the third piece, fraternité, is what goads the protagonists of The Revolutionists, a very new play (copyrighted last year) by prolific playwright Lauren Gunderson, onstage at the Unicorn Theatre.

Gunderson was the most produced living playwright in the United States in 2017-18, according to American Theatre magazine, though most haven’t heard of her. If you caught Christmas at Pemberley on TV (it’s now a “regional-theater hit,” according to the New Yorker), you know a little of her work. Cynthia Levin, the Unicorn’s producing artistic director, read several of Gunderson’s plays (the writer’s website lists 19) before selecting her favorite, The Revolutionists. Because it’s so funny, Levin says.

Missy Koonce directs this “giddy political comedy,” as the New Yorker calls it, with a bare-bones, unadorned approach, save the foreboding large guillotine that looms over the set. The play’s four heroines, in 1793, are caught up in both the political unrest and the political correctness of their day. That stubborn emphasis on fraternité is what inspires one of the women, French playwright Olympe de Gouges, to pen the “Declaration of the Rights of Woman and the Female Citizen” (a real thing).

A spy from the Caribbean, Marianne Angelle (Chioma Anyanwu — a self-aware, solid presence that also unveils personal sacrifice’s effects) is a composite character of an 18th-century revolutionary from Haiti, where slavery proliferated, and of La Marianne, the French symbol of freedom.

You might resort to pulling out your phones at intermission to look up names (as the couple in front of me did), or perhaps you’ll just reflect on the witty repartee of Gunderson’s fast-moving and layered dialogue, which delves into society’s ills and shortcomings while allowing its utterers to also look inward at their own motives and place.

It doesn’t take much to be accused of treason. “The revolution isn’t for the people anymore; it’s for the zealots,” Corday complains. She refers to Jean-Paul Marat, a radical journalist whose words may have caused thousands to be killed on the guillotine — though Corday herself, the “angel of assassins,” inadvertently helps sharpen that blade.

It’s a cleverly written, if a keenly (and somewhat navel-gazingly) piece of self-referential theater, a play within a play that focuses far less on plot than on character. And it’s replete with meta moments. De Gouges’ compatriots come to her to find their voices (lines to help them speak) and their roles in this revolution story. Attempting a script, de Gouges suffers writer’s block, though drama surrounds her. From de Gouges, Marianne wants pamphlets — “abolition human-interest stories” — not a play. “Theater is for rich people,” she says. “Chandeliers came with the place,” de Gouges responds, eyeing the lights dangling over our seats.

We lock on to these women, their introspective meanderings and their back-and-forth banters. It’s a fraught time, and de Gouges is fearful. “Is the National Guard already coming for the writers?” she asks. Even her bona fides as a political activist and abolitionist can’t save her from the turmoil’s excesses. “It’s the Reign of Terror, not the Reign of Agree/Disagree,” she says.

The stage, set up in three low-lying tiers with a curtained backdrop, is faintly lighted like the French flag, in blocks of blue, white, and red. Mobile scaffolding makes for awkward transport at times but stands in well as a stand-alone prison cell or the platform of the guillotine, the murderous moments captured in baths of red. (Scenic design by Emily Swenson, lighting by Shane Rowse).

Costumes (Arwen White) represent the period, Attaway’s massive pale-blue bird’s-nest wig an eye-catcher, as is her floral hoop-skirt dress, adding whimsy and frivolousness to the doomed queen. Severo appears in cropped pants (perhaps a nod to the sans-culottes, or working-class radicals, of the time). And Marianne’s outfit blends an islander look with that of La Marianne.

Amid their struggles to change the world “and live to enjoy it,” Marie-Antoinette may make the most pointed observation when she defines the word revolution: “The turning about of an object on a central axis, thereby landing its journeyman in the same exact spot whereon they started.” It’s literal, and not that far off.

History, they know, is a story. Their story. But it won’t get told if the doers and the writers are silenced.