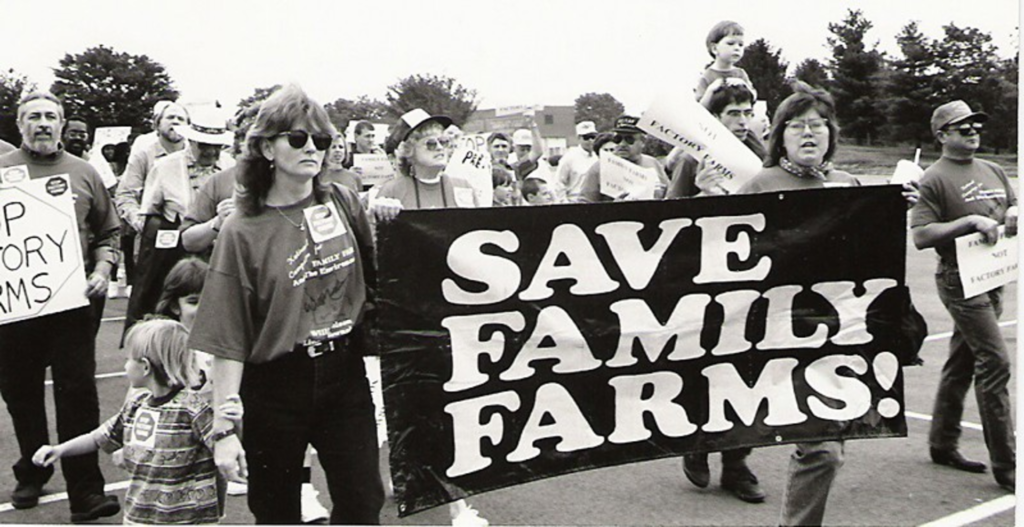 Every summer for the past 13 years, the question for Rhonda Perry has been the same: How am I going to transport and prepare 3,000 pounds of pork for a concert crowd?

Perry is a co-founder of Patchwork Family Farms, a hog co-op headquartered in Columbia, Missouri. Patchwork has sold pork-chop sandwiches and ham steaks at Farm Aid shows since 1999. Perry and her team of farmers, chefs and volunteers have been to New York City, Seattle and several Midwestern cities in between. “It’s a lot of work, but it’s a well-oiled machine,” Perry says.

The task is a little easier this year because Perry won’t have as far to travel. The Farm Aid concert on August 13 will take place at Livestrong Sporting Park, which is 140 miles from her and her husband’s farm in Howard County, Missouri. “We’re really excited it’s someplace nearby,” she says.

Patchwork’s story is in many ways the story of Farm Aid itself. The co-op grew out of the Missouri Rural Crisis Center, which received $10,000 from the proceeds of the original Farm Aid event in 1985. Willie Nelson, John Mellencamp and Neil Young started Farm Aid in order to help debt-buried farmers. They held the first concert at a college football stadium in Champaign, Illinois. The ticket sales and telethon raised more than $9 million.

The Missouri Rural Crisis Center used its Farm Aid grant to set up a food bank in Chillicothe. “It really demonstrated how crazy the system was, when you had farmers who were growing the food for people to eat who had to be lined up to get free food,” Perry says.

When Farm Aid began, the biggest threat to farmers was the credit arm of the U.S. Department of Agriculture. Delinquent mortgages were forcing farmers off their land. Several months after the inaugural concert, Mellencamp appeared at a protest outside a USDA office in Chillicothe.

Later, the focus shifted to the proliferation of factory farms. In 1995, Nelson traveled to tiny Lincoln Township in north central Missouri to participate in a rally against an industrialized hog operation. The company, Premium Standard Farms, had filed an $8 million lawsuit in an effort to unmake zoning regulations that the township had imposed.

Farm Aid’s founders, Perry says, were quick to recognize the threat that factory farms posed to rural communities. “They really stood up, back before it was popular,” she says.

Now, in its third act, Farm Aid is working to forge a stronger connection between producers and consumers. What began with Patchwork’s pork truck is now a full-scale celebration of the local-food movement. In recent years, Farm Aid’s organizers have insisted that the food served at concerts be organic, local or from a family farm.

“We can’t create the need for family farmers, really, without having that consumer buy-in,” says Jennifer Fahy, Farm Aid’s communications director. “If we really want to influence the kind of agriculture we’re going to have, all of us who eat — which is everyone — need to be involved.”

In advance of the upcoming concert in Kansas City, Kansas, organizers have been working with the stadium’s concessions company to find local products and ingredients. As a result, the flour in the bread will have made a short trip to the stadium. “We can’t go to Kansas without having Kansas wheat,” Fahy says.

The emphasis on the homegrown has led organizers to stretch Farm Aid into a two-day event. On Friday, the day before the show, the Livestrong pavilion will be open to the public for a state-fair type of gathering with local food, local bands, and information about canning and soil fragility. (Admission is $5.)

Farm Aid is still active politically. A representative from the organization, which is based outside Boston, recently went to the White House to talk about the long-standing issue of access to credit. “To this day, we’re still working on it,” Fahy says.

The Missouri Rural Crisis Center continues to receive grants from Farm Aid. Perry says each of the crisis center’s programs has been touched by Farm Aid, either with funding or with a personal appeal by one of the performers. “We’re just glad to have them both as supporters and as friends,” she says.

In the meantime, Perry and her fellow farmers are looking forward to working in the concessions area at Livestrong. It’s not often that pork producers get to interact with their customers.

“Every year, we hope to sell out,” Perry says. “Sometimes we do and sometimes we don’t. But it’s always great.”