The Rep’s What Would Crazy Horse Do? wants for an answer 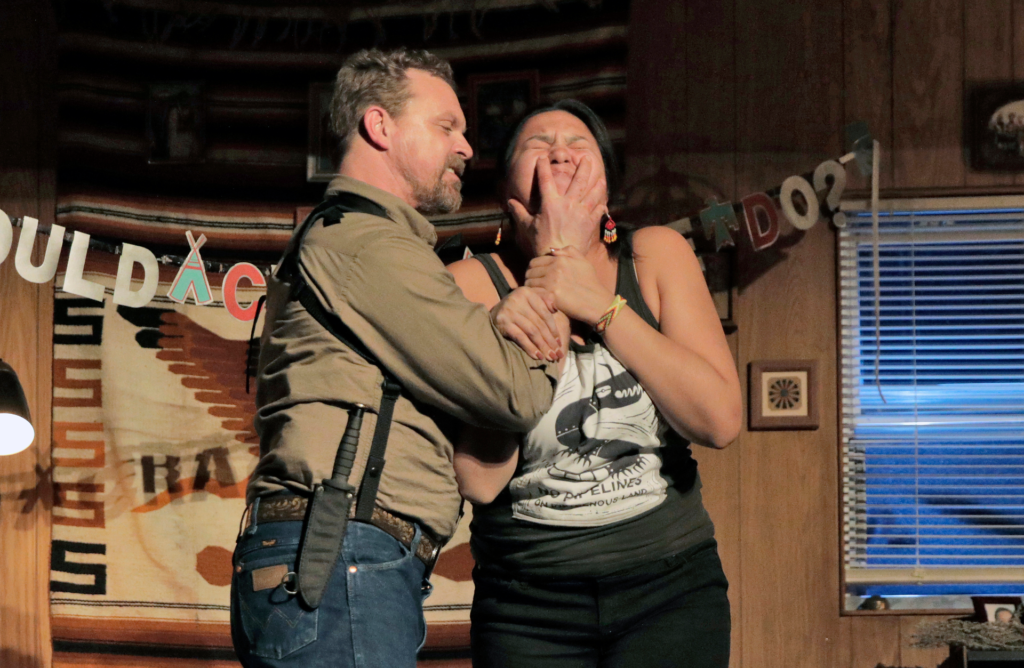 What Would Crazy Horse Do? appears, at first glance, to play off the “What would Jesus do?” meme. But it also reflects more profoundly on a people’s legacy and tragic history. The drama with that title, onstage at Kansas City Repertory Theatre — part of its Origin KC: New Works Festival — contains that very duality: It’s a deeply troubling show that only skims the surface.

The play’s premise is provocative, as is the historical document from which its plot is drawn: a 1920s Ku Klux Klan event flier depicting entertainment by Native American dancers. Playwright Larissa FastHorse aims to make sense of that former collaboration, both in the past and in the present. And she might have us reflect on the thinking and actions of the great Oglala Lakota warrior and leader “who single-handedly terrorized gold miners in the Black Hills,” says one of this play’s American Indian characters. But it’s hard to say if the play (directed here by Sam Pinkleton) speaks more for the KKK or the plight of the American Indian. Perhaps the difference between Native American life then and now is one of FastHorse’s points, but a muddled script and two-dimensional characters are just two of the issues in an 80-minute one-act lacking in coherent structure and cohesive statement.

At the fore are two siblings: Calvin (Christopher Reed Brown) and his sister, Journey (Roseanne Supernault), the only remaining members of their tribe. As the story begins, they are burying their grandfather. Calvin, who has returned recently from Yale, is devoted to Journey, who is, at the least, mentally unbalanced. (We never learn for sure what her illness is.) The two repeatedly refer to their “twin pact” — their commitment to each other “from womb to tomb.” But given the course of her story, FastHorse might rethink the purpose of that phrase’s frequent repetition.

Arriving at their door are two high-ranking representatives of the KKK (they call themselves the Free Americans): Evan (Amy Attaway) and Rebel Shaw (Jason Chanos). They aim to fulfill a contract that they say Calvin and Journey’s grandfather signed, agreeing to perform native dances at a large upcoming KKK rally, just as he had in the past, when he met Evan’s grandfather and formed some type of personal alliance — a friendship, perhaps. It’s this past cooperation that drives Evan in her ambition to create “peace through racial separation.” And she and Rebel are intent on compelling his grandchildren to honor the agreement.

These Free Americans are looking to reframe their organization’s goals and image — to market them, really. Suffice it to say some resistance and soul-searching come into play as Journey and Calvin deal with these two unwelcome visitors. But there is some meeting of the minds: a distrust of the federal government (including Journey’s brief verbal assaults on government-provided health care). Journey complains that frogs facing extinction receive more attention than a people confronting the same. They’ve seen suicides on the rise in their community — “colonization leads to suicide,” goes the line — and Calvin and Journey talk of reawakening the consciousness of their people. Evan and Rebel Shaw claim that they have the forum.

Is it a con or a true partnership? WWCHD is disturbingly thought-provoking, though unfortunately contrived and simplistic.

The clearest voice here belongs to Evan, who remains true to form throughout and is given solid presence by Attaway. Chanos and Brown also do excellent work, despite the script’s shortcomings and their characters’ obscure motivations and inexplicable waverings — particularly Calvin’s. That Yale “crushed his soul” is all we’re told of his life, a reference that does little to reveal his thinking or feelings. (Taking care of his sister preoccupies him now, he says.) Meanwhile, Rebel Shaw vacillates between that of a hate-filled stereotype and a caring compatriot.

Journey is bossy and angry — and, in Supernault’s depiction, nearly always shouting. She’s prone to violence. There’s plenty of violence here, when characters aren’t flip-flopping into bonding mode. Their fluctuations in behavior and actions sap this play of its intentions. (And a reference to terrorist organizations is just one example of a story insert inadequately explored.)

In an interview in the Rep’s program, FastHorse says her plays “don’t give answers but ask questions. They are intentionally open for interpretation in parts.” But this unfocused show, which tries to make sense of an event in history by combining racial politics with the long record of indifference toward Native Americans, leaves us puzzled as well as troubled. One thing, however, is clear: The “world premiere” is a work in progress, not really ready for its debut.

What Would Crazy Horse Do?