The Rep’s Man in Love is a mostly killer original 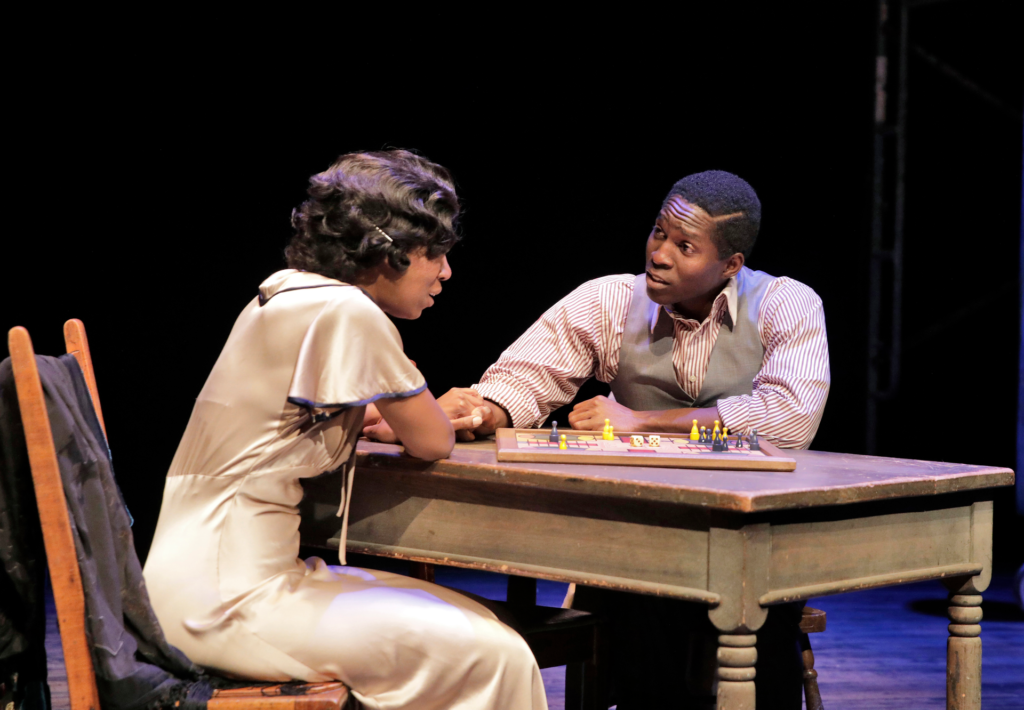 Odds are you’re thinking of a white guy, maybe even a stuffy H.H. Holmes type. But the racial breakdown of serial killers hews fairly close to that of the population writ large. White serial killers get the lion’s share of media coverage — perhaps because their victims tend to be white, too.

That’s one of many preconceptions checked in Christina Anderson’s Man in Love, a Depression-era thriller playing in rotating repertory with What Would Crazy Horse Do? as part of the Kansas City Repertory Theatre’s OriginKC: New Works Festival.

The man (the killer) at the toxic heart of the play is Paul Pare Jr., a quiet page who works in the segregated library of a fictional city. When he’s not shelving or repairing books, he’s playing cards or Parcheesi with his friends Darlynn and Bernice in the Zoo, the part of town where black folks live and white folks come to play.

When he’s not doing either of those things, he’s killing young black women and carving off pieces of their skin.

Anderson’s play opens with Pare in a one-sided conversation with his latest victim. Actor Rufus Burns is eerily charismatic in the role, pingponging between gracious small talk and snakelike whispers about the number of bones in the human hand. He slides so seamlessly into society, it’s easy to forget about his poisonous urges. But as his bodies pile up, the residents of the Zoo grow increasingly panicked — especially Darlynn, a black woman who hasn’t left her apartment in months.

Diane Yvette is predictably strong as Darlynn, balancing the character’s bare-nerve anxieties with face-saving vanity and hotheaded pride. Her chemistry with Bernice, a white socialite who throws rent parties every night, keeps the play sizzling even when the action onstage is just a hand of cards.

Bianca Leigh plays Bernice with a captivating flippancy that only sometimes masks her world-weariness. As the play rolls on, Bernice, a trans woman, loses patience with friends who aren’t willing to meet her on those terms. In one of the play’s best scenes, she and Darlynn clash in a scorching confrontation over who in the Zoo deserves love and protection. Anderson adeptly reminds us that the two aren’t necessarily the same.

Anderson’s scenes are often poem-short, necessitating frequent scene changes. Director Marissa Wolf turns that to her advantage by making the transitions a lively part of the play. The actors move their own props and furniture but remain in character, chasing each other around the stage and evoking a bustling industrial atmosphere with well-choreographed movements. Wolf’s work here is exceptional — I’d love to see her take on some projects in the Rep’s regular season.

With Man in Love, Anderson takes on a tangle of intersecting social identities — race, class, gender, the politics of “passing” — while staying true to the story’s era. Two thematically related subplots run in the background of Pare’s hunt: an old-Hollywood flirtation between Leigh (Justin Barron) and Hazel (Emily Shackelford), and a frustrated quest for love and labor by Walker (Michael R. Pauley). The Rep’s cast is just as strong here, and Pauley makes an especially vivid impression as a white ex-con teeming with sexual frustration and racial animosity.

But the minor storylines feel rushed, cutting some conflicts short and leaving others wholly unresolved. Leigh and Hazel’s courtship is charming and original, but their final reconciliation comes off pat and seems only tenuously linked to Pare’s arc. Meanwhile, a growing relationship between Bernice and Walker is clipped just when things start to get interesting.

So the interweaving storylines suffer from a few split ends. Still, Anderson and the Rep have created a wholly original world to which I long to return — if not for resolution, for another deeply discomfiting thrill.