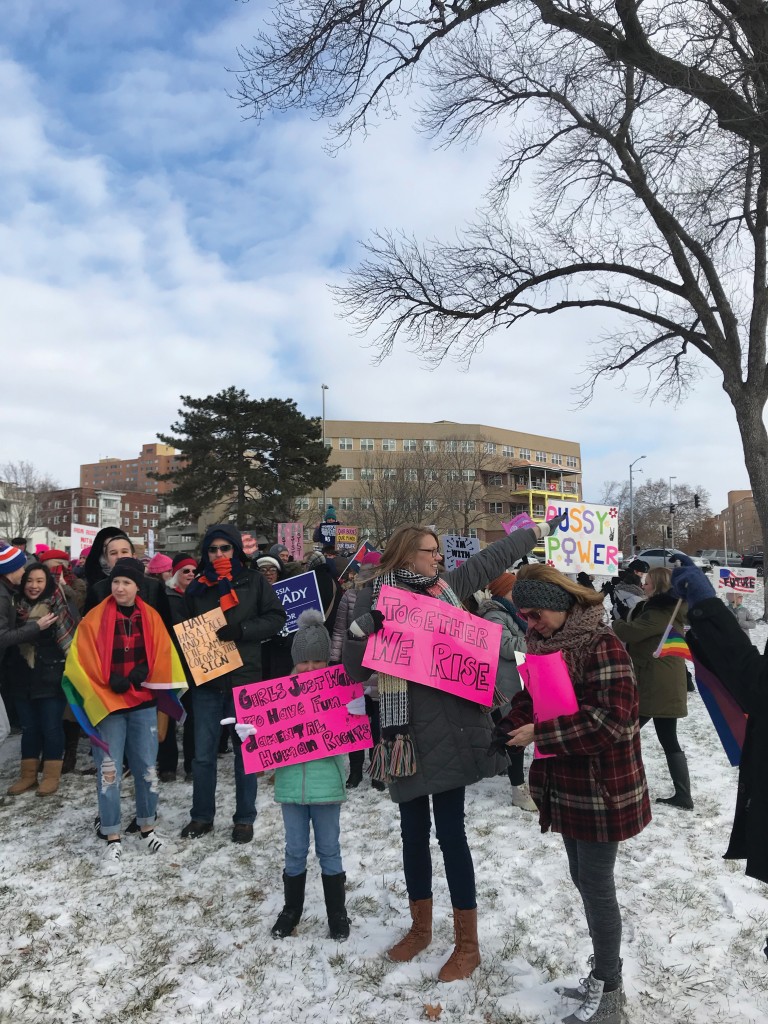 Outside during 2019’s Women’s March. // Photo by Kelcie McKenney.

In January 2018, Randy Fikki’s daughter asked him why other cities in the U.S. were holding Women’s Marches but not Kansas City. It had been a year since the original Women’s March brought over 10,000 people to Washington Square Park, near Crown Center, to protest Donald Trump’s inauguration. So Fikki, a reverend at Unity Southeast, a church on KC’s East Side, decided to plan a last-minute march from Brookside to his church.

The following year, he did so again, this time with help from Paula Neopte, a member of Fikki’s church, who stepped up as the official planner. But by then, people had begun talking about why a man was organizing women’s marches—and, furthermore, why these marches seemed so white. The events felt empowering when you attended, but behind the scenes, they also felt exclusionary, leaving out (or at best tokenizing) the transgender community, non-binary community, and women of color.

Neopte says that, in planning the 2019 march (which was held at Unity Temple on the Plaza), she reached out to multiple women of color in the community. This included Justice Gatson, a representative of the American Civil Liberties Union and the Reale Justice Network. Gatson declined to participate, saying that Fikki and organizers had asked them at the last minute, and they didn’t want to be tokenized. She explained: if the Women’s March would work with them over the next year and demonstrate that they actually wanted to support women of color outside the context of the march, then she would consider helping in 2020. 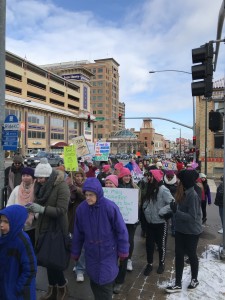 Pink pussy hats are an example of the national exclusion of trans womxn and womxn of color at marches. The reality is, not all womxn have vaginas, and not all vaginas are pink.

The 2019 Women’s March forged ahead, and as an attendee it appeared diverse. Fran Marion, of Stand Up KC, and Sheri Purpose Hall, a spoken word artist, were speakers at the event, along with then-Mayor Sly James.

“We felt like we had a good representation in terms of the folks that we had [speaking],” says Nepote. “It was an election year, so that was really cool that we had Alissia Canady there, Jolie Justus, Sharice Davids—that was amazing.”

Gatson points out that all but one member of the 2019 organizing team were white. Maite Salazar, a nonbinary community activist who is running for Missouri’s 5th District seat in the U.S. House of Representatives in 2020, says people of color are often approached late in the planning process for events like these—long after their input could shape them.

An exclusionary march isn’t unique to Kansas City. Across the U.S., media outlets have shared concerns with Women’s March since that first protest:  The Washington Post wrote about white privilege in 2017 and again in 2019, NBC shared black women’s take on the march in 2017, The New York Times shared accusations of the march’s anti-semitism in 2018, and USA Today asked if 2018’s march was more inclusive.

Fed up with feeling like an afterthought, Gatson this year decided to organize her own march, the Reale Womxn’s Rally—named after the Reale Justice Network and with the inclusive term “womxn” at the forefront.

“This is about getting the women in our city unified. This is about recognizing privilege and recognizing that there are people who suffer in ways that you don’t,” says Gatson, who has assembled a diverse group of planners for 2020’s march, including Salazar; Jen Harris, a queer activist and performing artist; Planned Parenthood organizer Leslie Butsch; Beccah Rendall, of Showing Up for Racial Justice and Kansas/Missouri Dream Alliance; and Maddie Womack, the founder of Barrier Babes, an organization that brings “unapologetic education” about sexual health to the Midwest.

“We’re tired of hearing from white womxn,” Womack says. “We don’t need that. Like, we already know we get paid less than men do. That’s a known fact amongst all people. But what we do need to know is the narratives that aren’t represented in the annual women’s march: Latinx, black, and indigenous womxn are paid far less.”

In November, Neopte and Fikki opted to cancel their Women’s March, but as of last week, the march is back on, with a Facebook post stating “Since making the decision to forgo the rally at Unity Temple, the leaders of the KC Women’s March have gotten many, many calls and requests to reconsider this opportunity.”

For Gatson and those planning the Reale Womxn’s Rally, that decision felt like continued exclusion.

“This unfortunate move does not expand true allyship to womxn leaders and organizers who work in the trenches,” says Gatson. “I am extremely proud that our rally is being guided by dozens of womxn whose commitment to diversity and inclusion is intricately woven into the fabric of our daily work.”

“I do believe our planning committee was diverse and inclusive, and we wanted to build on that this year,” Neopte says, adding that “some who are criticizing us for not being inclusive chose not to participate on the planning committee, even though they were invited to be a part of the leadership.”

“The issue is, when did you ask these people?” says Gatson. “And I can guarantee you it was less than a month before this event. And so that tells me they were an afterthought. And that’s the problem. People are tired of being an afterthought. Here’s the other thing, those black and brown people who did that work, they saved that march and don’t even know it.”

The Reale Womxn’s Rally strives to be intersectional from planners to speakers. Organizations who support the rally will also be sharing organization missions so attendees can learn how to get involved after January 18th—one of Gatson’s biggest goals for local activism.

“I believe it is truly being created from the heart and soul of the community,” Salazar says. “It’s something that the community needs instead of it being handed down to us. We’re creating it ourselves. And I always think that’s really beautiful.” 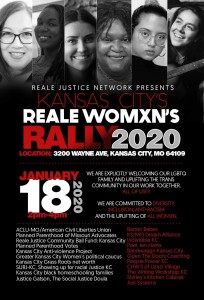