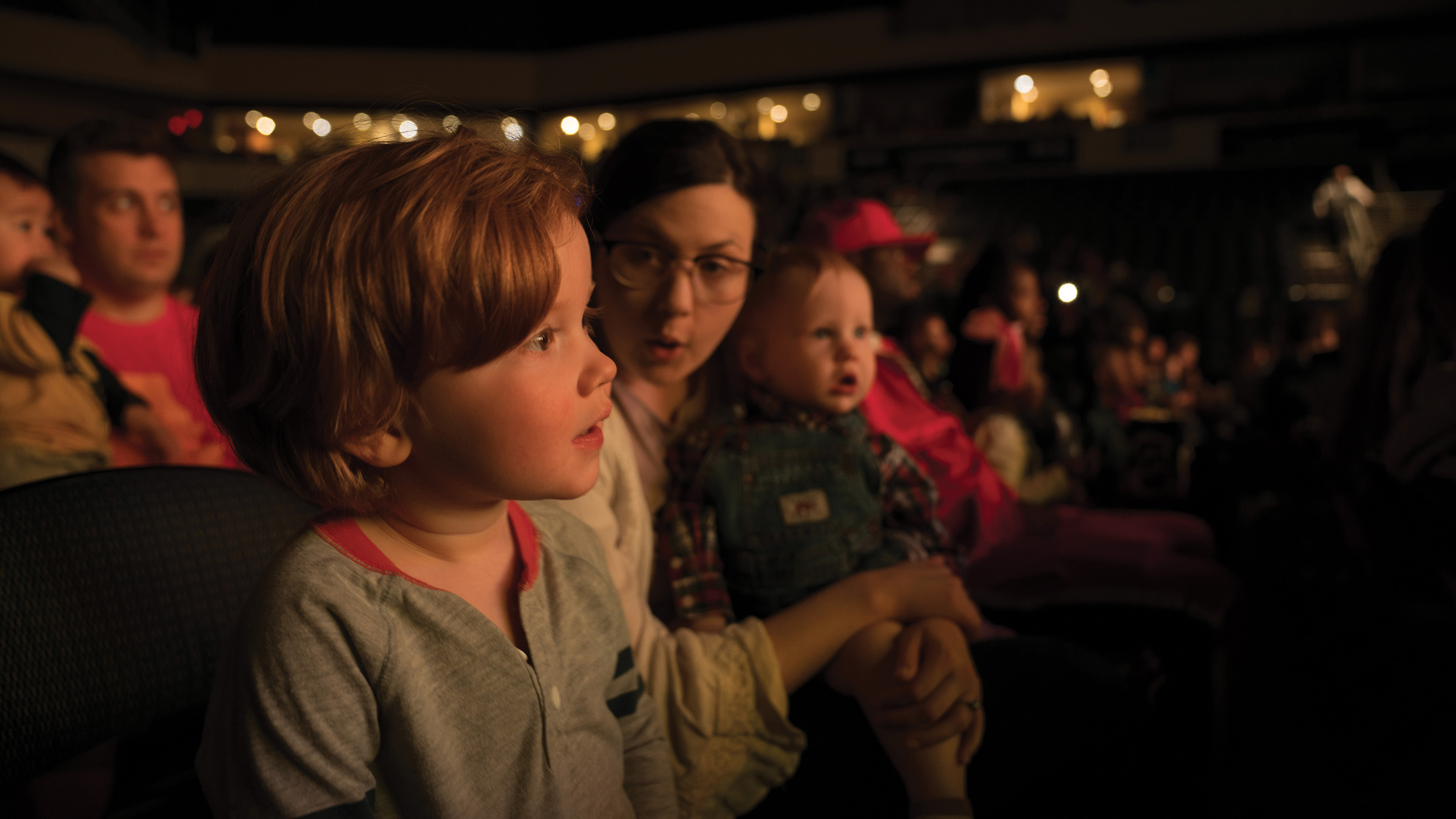 How many times can you listen to “Baby Shark” before going insane? // Photo by Joe Carey

My wife and I took our two sons to see the Baby Shark Live stage production—a real thing. That’s right folks, the impossibly popular earworm of a song has leapt from your tablets onto the big stage, and on a Sunday in early March, the titular yellow shark and a few of his land-dwelling friends (along with a troupe of dancers and puppeteers) donned the stage at Silverstein Eye Center Arena. It was an afternoon full of dancing, singing, moral lessons… and a fistfight.

As one of the few Pitch staff members with young children, I have become the proverbial “Man on the (Sesame) Street,” covering all the fun, kid-friendly goings-on here in KC. As such, it became my responsibility to drag my wife and two young children to the singing shark show. I’m not upset about it. [Editor’s note: We think he is.]

As my wife and I entered the arena, we were greeted by metal detectors and bag searchers. While this may seem a bit much for a children’s concert, I’m glad safety was at the forefront because not ten feet past the metal detectors a brutal fist fight broke out between two fathers as their children watched in horror. My 3-year-old son, Mars, asked what was going on, as my wife whisked him and our 15-month-old away to safety, and to find our seats. 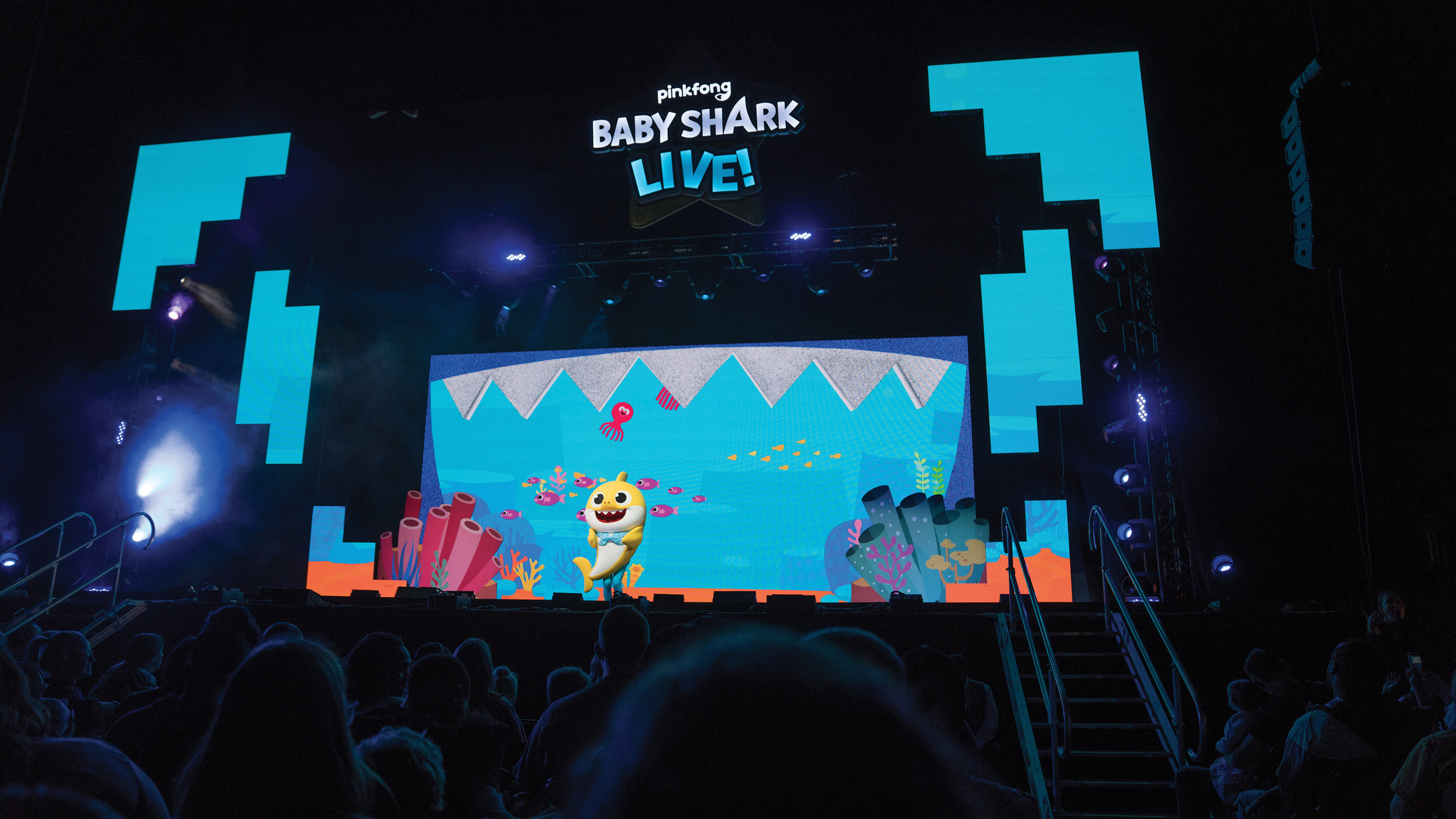 As we walked in, we were bombarded with color and music. The back wall of the stage had been transformed into a giant LED screen, flashing colors and shapes across the stage creating a sort of revolving environment for the characters to play. Speaking of characters, this was Baby Shark Live, so the characters you’d expect to see would be Mommy Shark, Daddy Shark, possibly Grandma and Grandpa Shark, and of course the youngest of the Shark clan, Baby. However, the aquatic predators were nowhere to be found. Instead, the first act focused on a pink fox named Pinkfong and a blue hedgehog named Hogi, and their meandering search for the little yellow shark.

The basic plot of the show, at least in the first act, loosely mirrors Samuel Beckett’s absurdist masterpiece Waiting for Godot. Hogi and Pinkfong wait for their friend Baby Shark to arrive, whilst several other throw-away characters show up to provide time-passing skits and musical numbers. The songs included several children’s favorites; “The Wheels on the Bus,” “Five Little Monkeys,” and “Skinamarinkadink,” as well as some Pinkfong originals. In between numbers, the two would discuss where that darned shark had gone to, which would then spark a haunting, Poe-esque “Doo doo, doo doo doo doo” from offstage that would send every child in the audience into a frenzy that would be quickly squashed when they realized the shark isn’t coming yet. The end of the first act, however, the little yellow shark did appear, and holy hell the crowd went wild. This is what the people came to see.

Then came the 20-minute intermission. They had to give enough time for every single child to go potty and then buy a stuffed shark. The second act featured Baby Shark much more than the first. The other members of his family only appeared via the giant LED screens, but the stage was filled with dancers and puppeteers controlling different aquatic puppets. The whole thing was a generally impressive spectacle that kept my kids entertained through most of it, though they were both pretty checked out by the end. To be completely honest, you could probably duck out at intermission and your kids would be none the wiser.

If and when this show comes back around, I would recommend it to anyone with young kids who still has the patience to hear the song for the 4 billionth time.