The perfect way to add even more alcohol to your weekend brunch: boozy jam 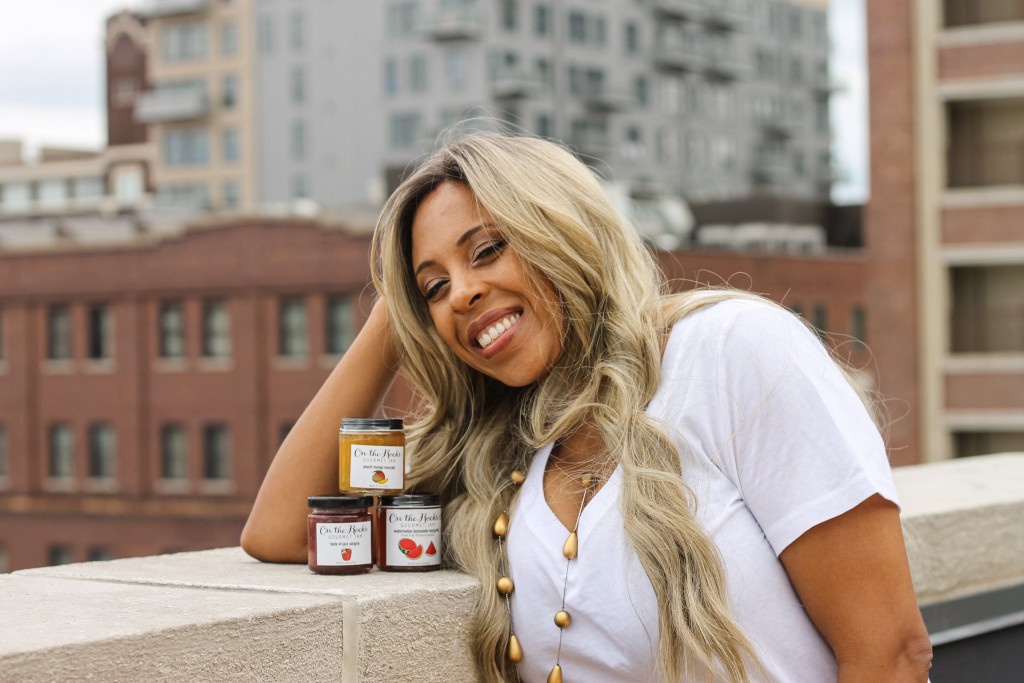 Cathy Cowan, modeling next to three of her boozy jams. // Photo by Bek Shackelford

Have you ever sat down to breakfast, looked at the pancake or piece of toast on your plate, and thought, “You know what this needs as a topping? Alcohol.”

No? Well, me either. That is until I tried Cathy Cowan’s alcohol-infused jam. This is the origin story of On the Rocks Gourmet Jams: 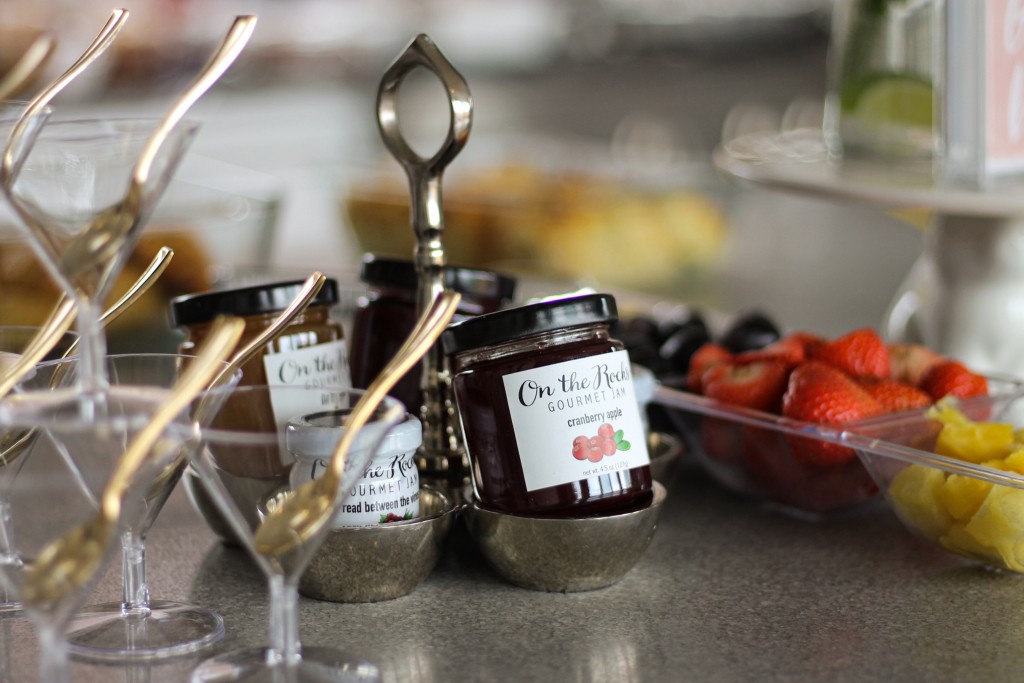 A selection of On the Rocks Jams at Cowan’s pop-up event this weekend. // Photo by Bek Shackelford

It all started in the spring of 2016 when Cowan was living in Atlanta with her two small children and working from home. Cowan was tired of hearing Disney Channel play in the background and like many of us working from home, was in desperate need of a change of scenery. When some of her girlfriends invited her out for brunch, she eagerly accepted, already planning her drink order.

Her children, Aubree and Harley, were five and three at the time, and they had other plans. During brunch, Cowan planned to leave them with their aunt, but by the time she herself was ready and had the kids dressed, fed, and had watched their competing “talent shows”, she had missed brunch with her friends.

Hangry and disappointed, Cowan realized she needed to find something to eat but was still craving a mimosa.

“I got to do something because I’m hungry and I didn’t even get to go talk to people,” she says, recalling her struggle to get out the door. “My aunt made this really good watermelon jam, I mean it was to die for. And so I was like, what if I make a jam, like this but with alcohol? Cause I need a drink.” 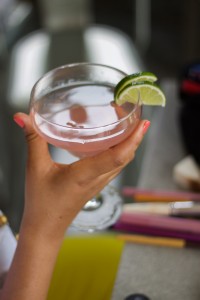 Cowan thought mixing fruit preserves and alcohol would be the perfect way to marry the light-hearted fun most people find through alcohol at brunch with breakfast foods, so despite her aunt’s skepticism, she started doing her research.

“I went on Pinterest, that’s my first go-to for everything. I didn’t see one, [a recipe for jam infused with alcohol] so then I Googled it and I didn’t find a strawberry daiquiri jam, for instance,” says Cowan. “I thought, “Well, I’ve heard that if you don’t see it on Google then nobody has created it, so I’m like oh hell, I don’t have anything but time.”

“I went ahead and started playing around the kitchen, and I made my first recipe for strawberry daiquiri jam,” says Cowan. “And then I called my friend who had like an Etsy page, I was like, ‘Hey I think I got a product but I don’t really know how to pitch it.’ So she gave me the idea to go to a local show or event.”

Cowan took her friend’s advice and began attending local festivals to sell her jam. Almost five years and a dozen flavors later, she makes her jam in commercial incubator kitchens. The bulk of her sales are online, but recently she has started selling her products at Made in KC, The Better Cheddar, (both KC-based), and at 88 Bottles, a gourmet food and wine store in the Virgin Islands. She has returned to the Kansas City Area, where she was born and raised.

Cowan, who has fond memories of making jam with her family, wanted to preserve that but add her own twist. 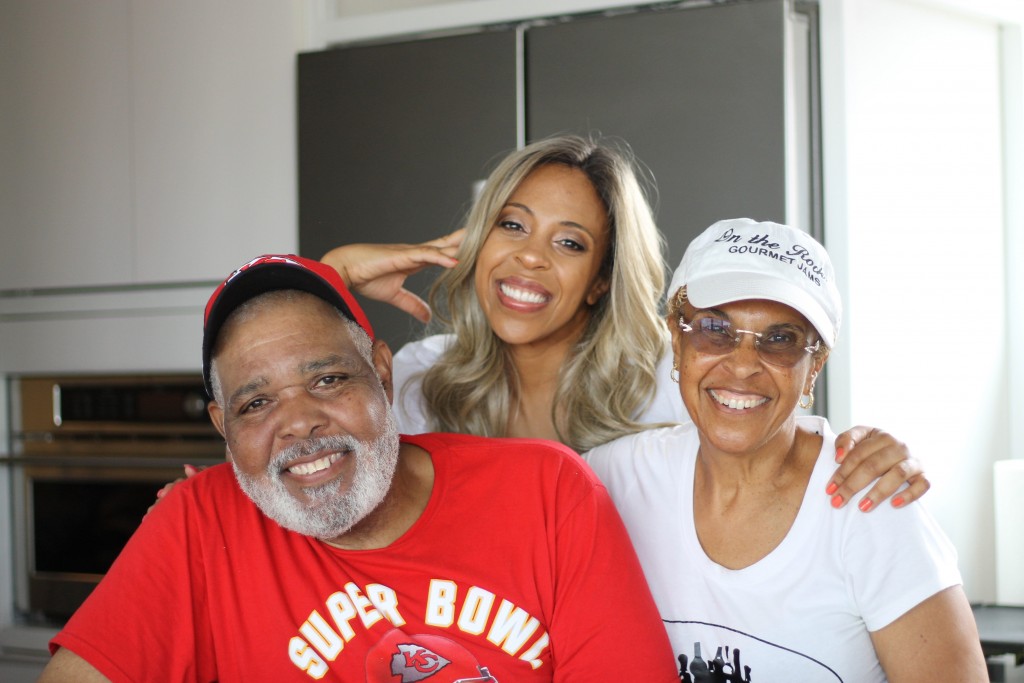 Cathy and her parents, Curtis and Charlotte Lane. // Photo by Bek Shackelford

“I wanted to have that nostalgia of when you made jams with the grandmother or mother, but I wanted to modernize it and think of different ways that you can infuse the jams into your food, you know, to make pancakes different,” says Cowan.”Or my French toast will be like regular French toast but marinated in raspberry mimosa jam.” 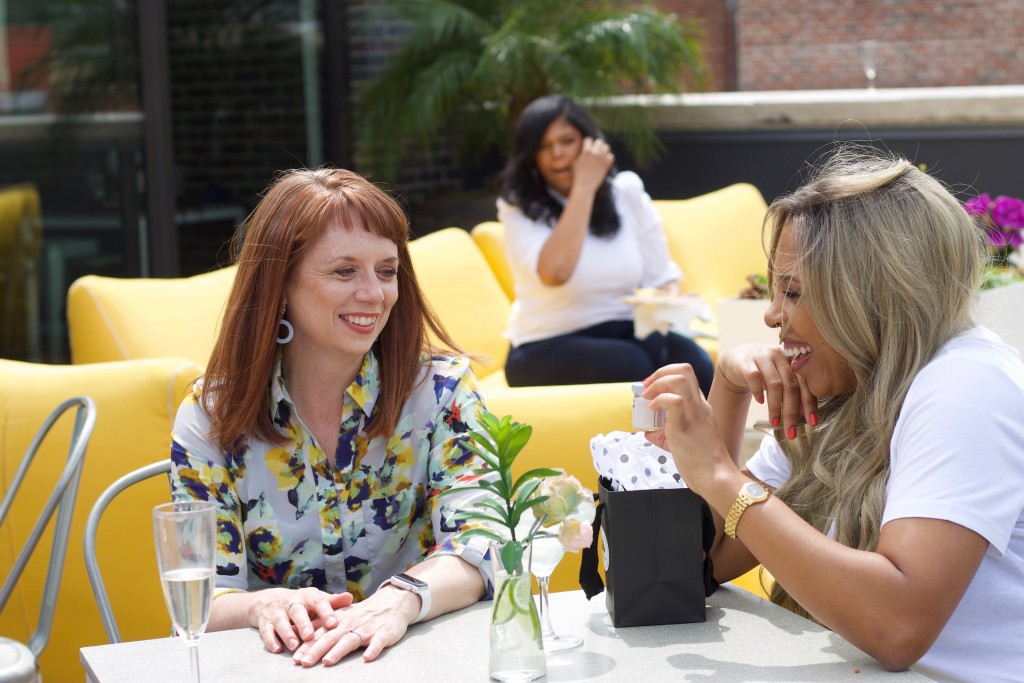 Cathy shows a jam sample off at her brunch pop-up. // Photo by Bek Shackelford

Cowan celebrated her jam-making business with a brunch pop-up on Sunday, complete with hair and makeup for attendees, an open bar, breakfast-style food, and pastries featuring her jam, and jam samples. She says that she plans to continue to do popups like Sundays to boost business.

“This event is my chance to kind of show myself that I’m going to be consistent in getting myself out there,” says Cowan.”The one thing is I figure the best way for me to get out there, is not by me telling you. Chances are you’re gonna listen to your friend more than me.”

In addition to jam making, Cowan takes joy in selecting ingredients. Many of the produce lovingly stirred into her jams comes from local farmers’ markets or orchards.

To purchase Cowan’s jams or view what flavors are available, check out her website. If you’re looking for the perfect gift or brunch starter set, check out On the Rocks gift sets.

I highly recommend the “Party Like a Rockstar” jam, made with blackberries, grapes, passion fruit, vodka, and champagne.