The other ‘F word’ 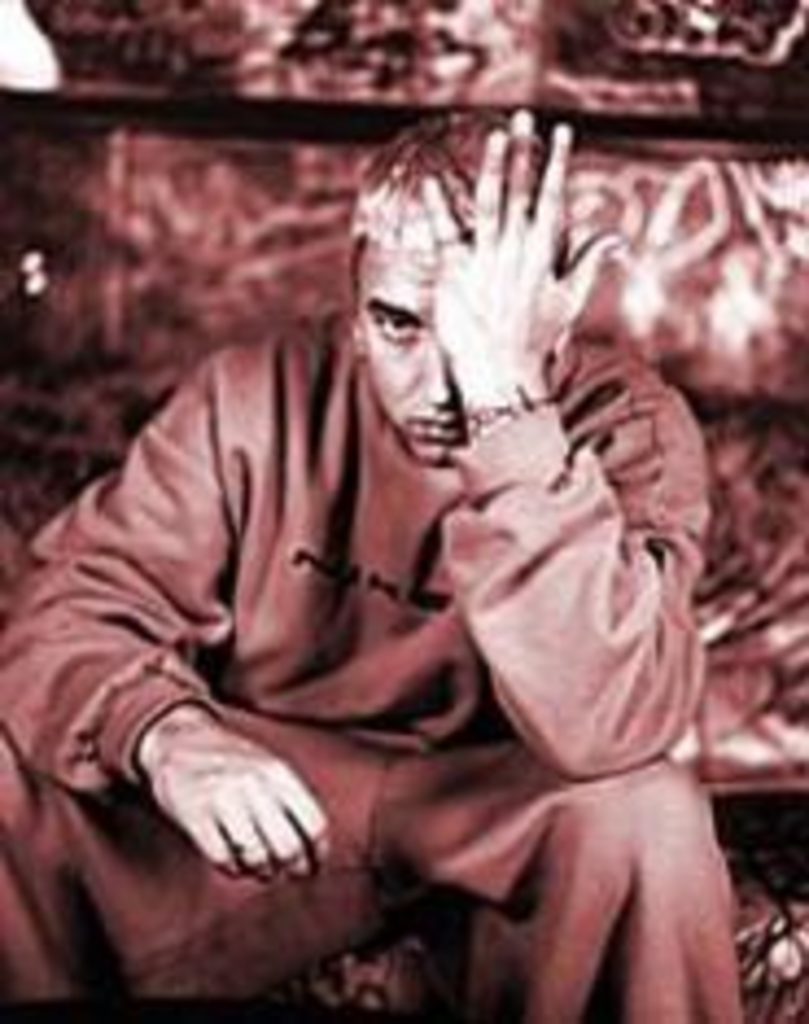 My words are like a dagger with a jagged edge/that’ll stab you in the head/whether you’re a fag or lez/…hate fags? The answer’s yes — Eminem, “Criminal”

Marshall Mathers LP, the sophomore effort from Michigan-by-way-of-Missouri native Eminem, ranks among the year’s best from a musical standpoint. With tight production by Eminem himself, Dr. Dre, Mel-Man, and others, this record jumps from one slamming track to the next, with the adrenalized “Criminal” perhaps the most potent. Eminem’s flow provides the album’s biggest selling point, as he moves from topic to topic with a say-anything style few rappers have been able to match since Common’s Resurrection dropped in 1994. However, as the above excerpt suggests, Eminem’s new joint distinguishes itself from the rest of the pack in other ways — namely, it’s quite possibly the most potentially offensive major-label, soon-to-be-platinum record ever to be released. Eminem breaks one taboo after another with this thoroughly shocking LP. No wonder Axl Rose is waiting so long to put together the lyrics for the Guns N’ Roses album Chinese Democracy — he’ll have to come up with something a lot more devious than “One In A Million” to remain an anti-p.c. renegade icon in the post-Mathers era.

Some of Eminem’s venomous diatribes are easy to dismiss. Fans, friends, and family of Christina Aguilera, Britney Spears, and ‘N Sync might be traumatized by Eminem’s razor-sharp attacks on these easy targets, but most will simply chuckle at these cheap shots. And though his slam at Insane Clown Posse is rife with homophobic epithets (and it didn’t take much of Em’s brainpower to change Shaggy 2 Dope and Violent J into “Faggy 2 Dope and Violent Gay”), it’s hard to feel sympathy for his equally homophobic victims, who are quick to offer elaborate proof that they’re the two straightest guys ever to spend hours daily applying makeup. However, the latter “faggot”-filled assault reinforces the unfortunately prevalent teen trend of using “gay” or offensive descriptions of homosexuals as either an insult or a derisive adjective.

On Eminem: Hits and Disses, an MTV special dedicated to the controversy the Mathers LP sparked, Eminem told Kurt Loder that he had nothing against homosexuals and claimed that his lyrical content was ambiguous, pointing to the line I like gay men, which comes just a few seconds after a tasteless jab at the late Gianni Versace (Hey, it’s me, Versace/whoops, somebody shot me/I was just checking the mail/get it, checking the male). Dr. Dre’s response (“I don’t care about those people”) and his disdain for Loder’s follow-up question (“But what if you were gay? Would it offend you?”) were more indicative of the antigay undercurrent in hip-hop.

From Big Daddy Kane (the Big Daddy law is antifaggot) to Heavy D (you’ll be happy like a faggot in jail) to Eazy-E (this is one faggot that I had to hurt) to the Wu-Tang Clan (numerous references), hip-hop artists have a history of homophobia, although Eminem’s effort is by far the most consistent and focused attack on gays ever captured on wax. Protests are sure to follow, a fact hinted at in a skit on the album during which Eminem meets with a label bigwig who exasperatedly points out that while labelmate Dre raps about “big-screen TVs, blunts, 40s, and bitches,” Em raps about homosexuals.

A notable percentage of hip-hop listeners claims it doesn’t matter to them whether the subject is big-screen TVs, gay bashing, or backing dat ass up. Members of this group say beats matter and lyrics are secondary, and anyone who has witnessed the discrepancy between the graphic-equalizer attention given to bass and vocals on the average car stereo owned by a member of said group knows they’re telling the truth. Dre gave a shout out to this group on the MTV special, instructing listeners to “buy (the album) and bump it” instead of dissecting its lyrical content.

However, as much as fans and critics try to separate the music from the lyrics (Entertainment Weekly gave the album an “A-” for overall artistry and a “D+” for moral responsibility) and perhaps even downplay the unsavory element, the fact remains that the Mathers LP contains glib references to gay bashing, domestic violence, rape, and countless other atrocities, and owning or recommending the album implies the acknowledgment of such lyrics as acceptable expression. Whenever questionable lyrical content and unquestionably strong music meet, it creates a quandary for listeners — where are their limits? If someone made a pro-Nazi album that was musically impeccable, would listeners buy it? Is there something inherently wrong with singing along with these lyrics when the same listener would probably punch a stranger for saying the same words on the street — or with knowingly giving money to someone whose viewpoints the listener finds deplorable? These and other life-complicating issues are raised as a result of Interscope’s being brave enough to release this incendiary album, and the fact that its existence is sure to provoke countless passionate debates, discussions, and “I believe in free speech, but …” commentaries makes the Mathers LP a milestone release. What’s more difficult to determine is whether it’s a must-own release.

On the hit single “The Real Slim Shady,” Eminem raps there’s a million others just like me. He’s right, and that number is sure to swell as the Mathers LP flies off the shelves. The question for the consumer becomes: Am I in this number, and if not, do I really want to play a part in making this number grow?