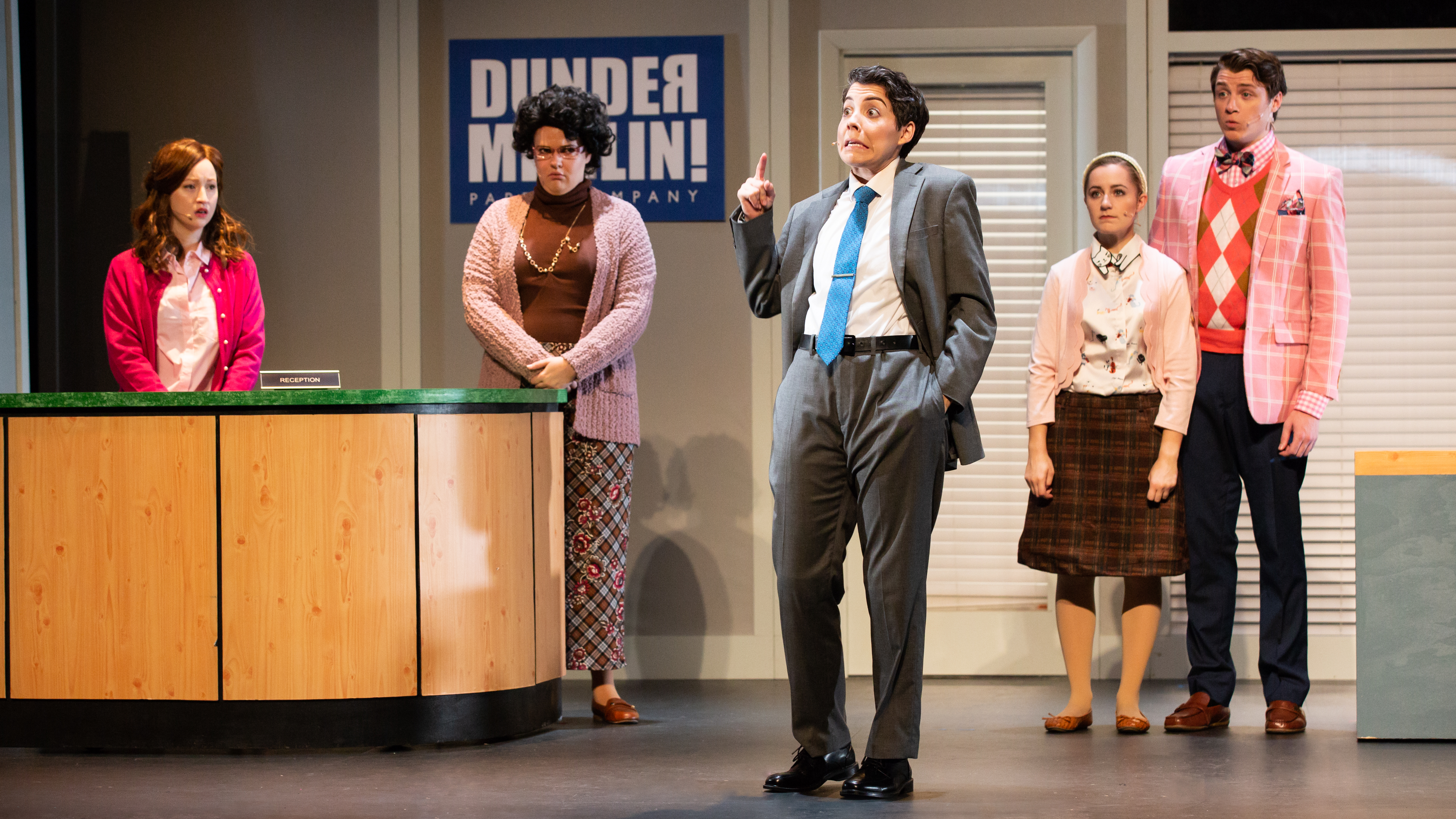 Going into The Office! A Musical Parody, I had no idea what to expect but I was excited. Even before the show started, there were cute details to take in. I picked up my specialty “Meredith Palmer” cocktail and took my seat, where the pre-show soundtrack played recognizable tracks from various episodes–songs like Supertramp’s “Goodby Stranger” and “Forever” from Jim and Pam’s wedding episode.

These details were fun little nods to the source material, despite not being material from The Office themselves. They were also, unfortunately, the extent of enjoyment I would experience.

The show is a series of abbreviated scenes and classic jokes from the show, peppered with some meta critique. That sounds like a recipe for fan-service success that should be difficult to ruin. The problem is that most of the jokes chosen by writers Bob and Tobly McSmith represent the very worst of the characters. So we get the sexism, racism, and homophobia of the most cringeworthy moments, but without any sort of redemptive context.

It is less the plot of a long-running narrative, and rather an extrapolation of the base cruelty from Season One level versions of the entire ensemble. But then sprinkled across a Dadaist timeline of the show’s events. The manic nature of this play means that despite its two-plus-hour runtime, there’s no time to build any affection for these characters or to establish that Michael’s terrible sense of humor is the joke. Ignoring those issues, the writing chooses to go a step further, by leaning into racism, homophobia, sexism, and out-right rapey behavior for the cheapest laughs imaginable. They might as well have handed the scripting duties to a set of drivetime morning radio DJs and their sound-effects pad full of farts and slide-whistles. 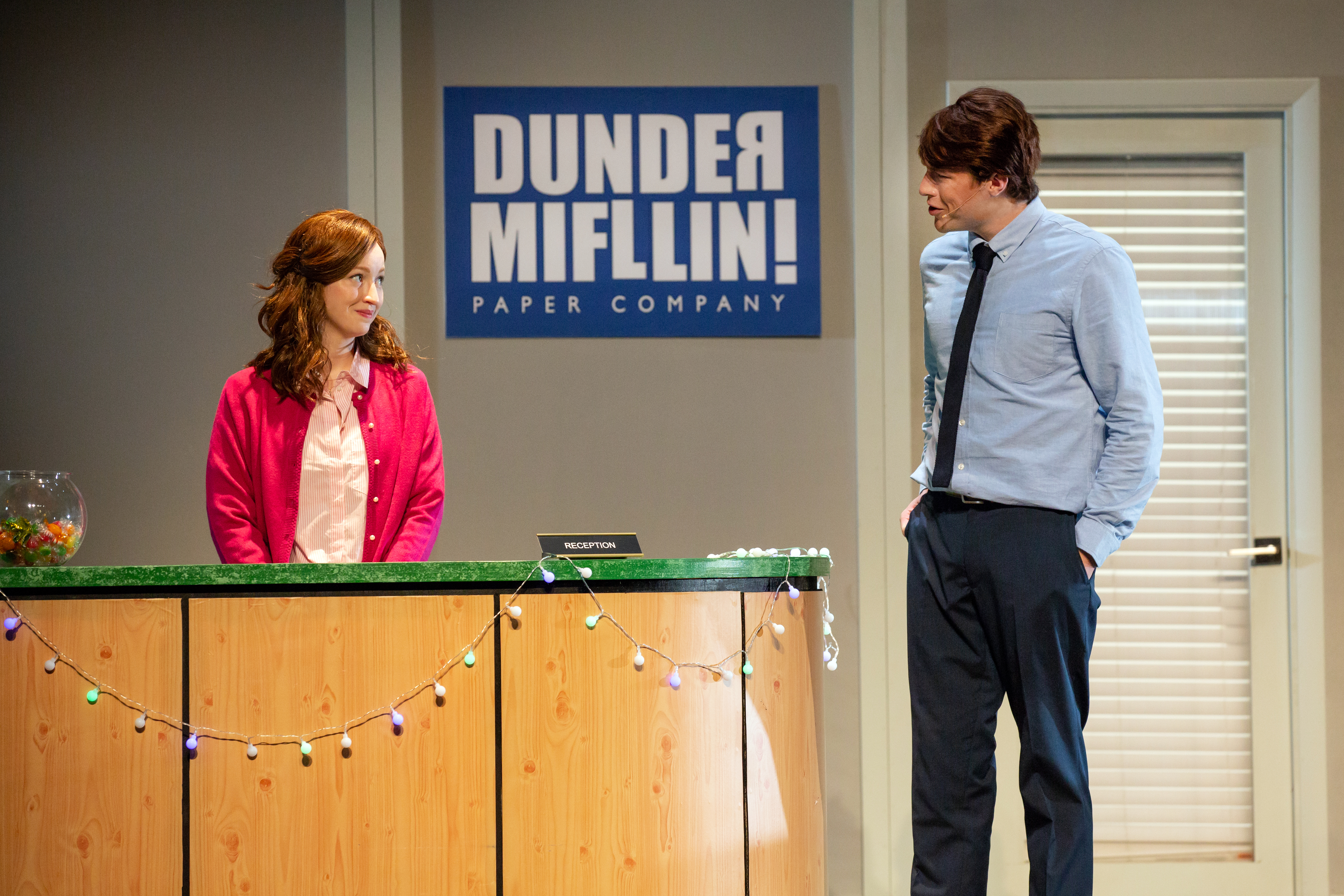 What we’re left with is just a bunch of painful riffs thrown out in quick succession and labeled as “parody.” This is not parody. This is reference. This is shouting while pointing and saying “Remember when Michael called Dwight an ignorant slut? Do you remember how hard you laughed when you saw that in the early 2000s? Do you remember?”

This is parody in the same way that you might call out a douche at the bar for a terrible joke, only to be told that you don’t “get satire.”

As for the music, there are a limited number of very short songs. A couple of which teeter dangerously close to being charming. There is no other way to introduce Andy “Nard Dog” Bernard than with a banjo and a sweater vest. “That’s What She Said” came the closest for me to really sending up one of the show’s long-running jokes in a way that celebrates the material and the characters. But finding songs that last more than a minute is rare. Calling this a parody was a stretch, but calling it a musical is almost irresponsible.

I would be remiss to not mention that Dwight sings a song about how we need to domesticate the women and then makes the entire office dress like characters from The Handmaid’s Tale. I have a notebook of similar observations from the production that read as if they were scrawled during a fever-dream. Your guesses here are as good as mine.

The play seems to strongly and inexplicably hate its characters. It’s baffling. It unfolds as if the show’s creators were past deadline on turning in a musical, about a show they’d never seen, and while rushing to get it turned in they simply took out all their anger on some of television’s most beloved character actors. Nothing is more uneven than the interspersing of scenes from Jim and Pam’s overly sincere arc between the rest of the high-strung comedy. It’s so disjointed that the sweetness of those moments falls so flat, rarely and barely stumbling into the saccharine.

It is not camp and it is not schlock and it is certainly not a functional parody. By intermission, it has completely depleted the seemingly unending well of goodwill The Office has earned from multiple generations.

Who asked for this? Who is this for?

If you’ve never seen The Office, the script, made entirely of in-jokes, might as well be a foreign language. If you love The Office, I don’t think there could possibly be anything for you here. There is a slight chance that if you saw The Office once, years ago when it first aired and you half-remember it, maybe reliving it via a series of dancey spurts and non-sequiturs will accidentally fire some bolts between your nostalgia neurons. I do not doubt that there is a type of person this would appeal toward, but dear reader, I am almost positive it is not you.

The Office! A Musical Parody
Through February 9 at Starlight Indoors
4600 Starlight Road