“While I believe I solved a murder, it’s not to congratulate myself. This is in no way resolved.” 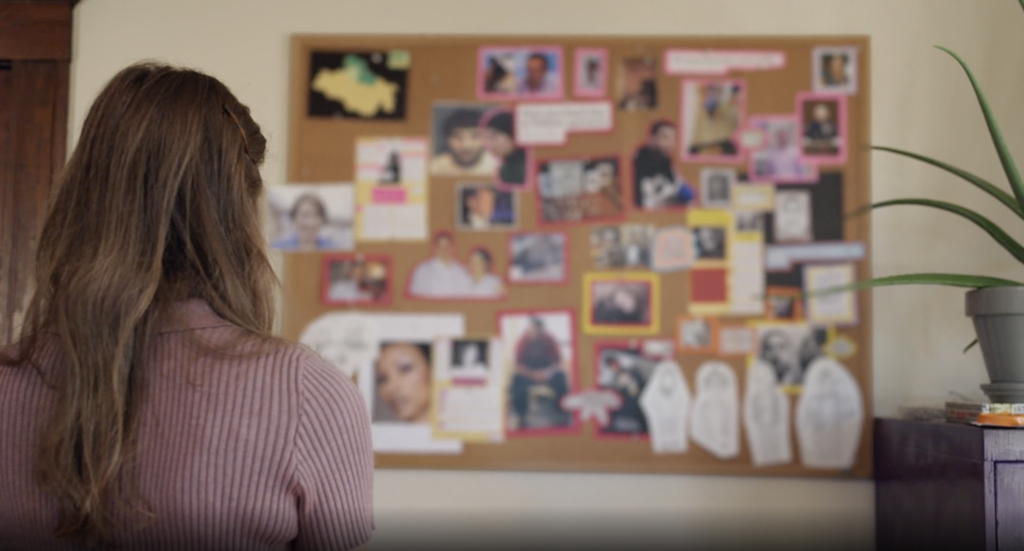 As a default proxy Greater Boston spokesperson and frequent giver of opinions to friends and readers from beyond the Bay State who solicit my take on things ranging from big media events to breweries in these parts, I am bracing for the coming inevitable wave of questions about The Murders Before the Marathon premiering on Hulu this week.

When they come asking, I will tell people that the three-part documentary series is a rare reported work about this region that was produced with assistance from non-New England forces but somehow avoids the silly and humiliating chowdahead tropes and tourism commercial broll that compromise most Hub treatments. The authenticity is especially impressive considering how the subject matter constitutes but one slice of a larger story that’s been feverishly mined by many: The Murders follows journalist Susan Zalkind as she “pieces together the truth behind the 2011 murders of Erik Weissman, Brendan Mess, and Raphael Teken in Waltham, Massachusetts,” which are “believed to be the first murders committed by Boston Marathon bomber Tamerlan Tsarnaev.” Zalkind “was friends with Weissman and raised in the Boston suburbs that were rocked by these horrific crimes,” and calls her “connection to the case” both “personal and professional.”

In an era where most up-and-coming journos are typically tasked with posting several articles a day, and are rarely able to drill down, Zalkind is a stark exception. She’s been on the Waltham slayings beat since Sept. 11, 2011, “when my friend [Weissman] was murdered,” she said in an interview with DigBoston. As Zalkind also explains on camera, at the time, she already “wanted to be an investigative crime reporter,” and “really felt like that was my calling.” Having been raised by a trial-lawyer father who has handled drug-trafficking cases, she was simultaneously sad and shocked about the loss and questioning the utterly outrageous nature of the crime scene.

“I had never heard of any murder like this before—I thought it was a huge story even at the same time that I was grieving my friend,” Zalkind said. “It was so unusual—three men found with their throat slit? In a suburban neighborhood? It’s quite a feat to slit one person’s throat, let alone three, one of whom is a purple belt in jujitsu. And there was marijuana on the bodies and cash left behind?”

It was a grisly scene, a horror show. But even though the executions curiously happened on the 10-year anniversary of the 9-11 attacks on the World Trade Center and Pentagon, spurring some speculation in internet chat rooms and on the nascent social media platforms online at the time, the story quickly disappeared.

“I thought this was the biggest, most unusual murder case I’d ever heard of,” Zalkind recalled. “And no one else in the media or law enforcement seemed to think it was unusual. It was written off as three drug dealers who had it coming.”

Having spent 20 years in this town straining my larynx and sanity crusading to sway major press and thus public attention toward topics and tangents that go-along-to-get-along hacks barely notice or ignore altogether, I’ve sympathized with and cheered on Zalkind from early on. Still, as someone who went so far as to compile a short book focused on the national media’s disruptive and embarrassing descent on Boston following the bombing, when she began asking questions like Did the Boston bomber kill my friend? and If detectives had investigated Erik’s case more thoroughly could they have prevented the bombing?, I had to wonder if readers would ever embrace new chapters of the marathon story that weren’t drafted by the Boston Globe then truncated into bite-sized nuggets of badgelicking banality for six o’clock news viewers.

It didn’t take long for Zalkind to see what kind of challenge she was in for. “It wasn’t a story that was reported, so every little bit of information, I’ve had to go out and get it,” she said. “In regards to the Waltham case, there was some good reporting, like the New York Times, but to a large degree, you’re building this narrative on your own. It’s taken me years to get information.”

Following the bombing, which took place nearly 20 months after the Waltham bloodbath, Zalkind said she “wasn’t sure if there was really a connection between the two tragedies”—“we just knew that Brendan Mess knew Tamerlan Tsarnaev.” She initially “had some concerns about the lackluster [local police] investigation,” but with Boylston Street blown to pieces, Zalkind figured, “Hey, the FBI is involved.”  “[I thought] everyone was gonna pay attention to these three men and nobody was going to judge them for having sold marijuana.”

That’s not how the plot unfolded though. And after Ibragim Todashev, Tamerlan’s old sparring partner from the famed Wai Kru mixed martial arts gym in Brighton, was fatally shot in Orlando, Florida in May 2013 by an FBI agent while being questioned about Mess, Weissman, and Teken, Zalkind realized, “it was clear to me that there was nowhere else to turn for answers.”

Up to this point, she had communicated with various outlets about her findings tying Tamerlan to Waltham, sometimes taking a byline and other times supplying editors and writers with tips. But by mid-2013 she was all-in, quitting her day job to extract clues and pursue leads. Zalkind became the go-to plug for news items circling the intersection of these issues whenever they surfaced. Her extensive beat reporting as well as longform pieces for Boston Magazine, including an exclusive interview with the girlfriend of Todashev in Orlando, convincingly connected dots and countered the narrative of non relation between Waltham and the finish line, especially as her 2014 feature (titled The Murders Before the Marathon, like the subsequent doc) and companion This American Life story found a national audience.

After three years on the case, a career shift into overdrive, and countless hours spent writing and researching, however, Zalkind said her “reporting still didn’t feel finished.” “That’s when I started connecting with an agent about potentially writing a book [due out in 2023]. I still had questions. I had done all this reporting, but in some ways I felt further away from knowing the truth of what happened.”

And then came calls about a docuseries.

“I was hesitant at first,” Zalkind said. “As much as I’d love to be a documentary filmmaker, my solace throughout all of this has been aligning what I’m actually doing here, which is telling the truth, and I couldn’t imagine working on something that didn’t add to the story. That’s when I got an email from [screenwriter and producer extraordinaire] Matt Cook. … I got on the phone with him thinking I would shut this whole thing down. But he’s a serious combat veteran [and] I got the sense that he’s an action junkie, and I was at the point in my reporting where I still wanted answers, but I didn’t want to put myself in dangerous situations anymore. I asked Matt if he wanted to knock on doors with me, and he was totally game. So I said, Yeah, this could work.”

With Cook executive producing and Jesse Sweet of City of Joel renown directing, Zalkind said, “I was able to do so much reporting I couldn’t have done on my own.” Also involved with the collaboration were ABC News Studio, the New York-based production company Story Syndicate, and the management company Anonymous Content. Together, they produced the most damning expose on law and order in Mass since Trial 4.

“I had a very talented team,” said Zalkind, who is credited as a producer on the series. “It was a learning process for all of us. I had Matt as an advisor and navigating in my corner and getting the show sold. Jesse is a very talented director and he was really good at pulling the story out of the weeds because I’ve been in it for 10 years.”

Over time, as mainstream journalists dropped the ball and conspiracy pundits led legionnaires in dangerous directions toward dead ends, Zalkind discovered truths that are less thrilling than grand schemes of deep-state operatives scapegoating the Tsarnaevs, but that are still plenty conspiratorial if that is what you’re looking for. At the least, those interested in the many dirty details and loose ends around how law enforcement handled everything from the Waltham murders to the Watertown manhunt that resulted in the death of Tamerlan and capture of Dzhokhar Tsarnaev will appreciate how The Murders paints a darker picture than most bombing coverage of the sometimes sinister, perpetually stupid, and eternally elusive bumbling officials managing the circus.

“A lot of conflicting information came out of Dzhokhar Tsarnaev’s trial,” Zalkind said. “[I thought it was] obvious that Todashev and Tamerlan [committed the Waltham murders], but I didn’t want to take that for granted. I had to really prove that, especially since there was so much information coming from federal prosecutors questioning [Todashev’s] confession.” Regarding revelations in the final installment, the producer added, “I can’t say with all certainty that [Tamerlan and Todashev] did it, but the evidence you’ll see at the end of the series cements for me that they did, there’s no question.”

As willfully blind feds and dimwitted detectives worked in silos, Zalkind soldiered on. And still nudged further as federal prosecutors insisted otherwise. “You have attorneys for the Biden administration questioning [Todashev and Tamerlan Tsarnaev’s involvement in the Waltham murders, which the government asked the US Supreme Court to restrict Dzhokar Tsarnaev from speaking about in his death penalty hearings] a year ago,” she said. “Talk about pushback.”

With the release of The Murders Before the Marathon on Hulu, this week the reporter gets to push back in the other direction. With millions of people watching.

“I’m ready for the world to finally pay attention to this story,” Zalkind said. “Erik [Weissman],” she added, was cheerleader-level “supportive,” and she’ll be thinking about him as her film trends and reopens the dialogue.

“It sounds corny to say, but he was truly invested in the hopes and dreams of the people he cared about,” she said. “It’s not just me [saying that]—it’s the people I interviewed.” (Many subjects noted how, if he was alive today, Weissman would likely be a leader in the legal cannabis industry.)

“While I believe I solved a murder, it’s not to congratulate myself. This is in no way resolved.”

Chris Faraone is the editor-in-chief of DigBoston and a co-founder of the Boston Institute for Nonprofit Journalism. This article is syndicated by the MassWire news service of BINJ.