The MET’s Parade doesn’t quite find its through line

Is Jason Robert Brown an Andrew Lloyd Webber for millennials?

Evidence suggests at least a strong maybe. The composer’s recordings (“Songs for a New World,” “The Last Five Years”) are reliable fixtures in my friends’ car stereos, thanks in part to Brown’s proprietary blend of deflecting snark and naked sentiment.

But his Parade — the ironically titled musical on which Brown collaborated with Pulitzer Prize- and Tony Award-winner Alfred Uhry — isn’t exactly the stuff of summer playlists. The subject matter is, give or take a couple of stand-alone hits, pretty grim.

There’s buoyancy, however in the Metropolitan Ensemble Theatre’s production of Parade, which is peppered with the kind of performances that prevent the most saccharine piano hooks from curdling into emotional manipulation. 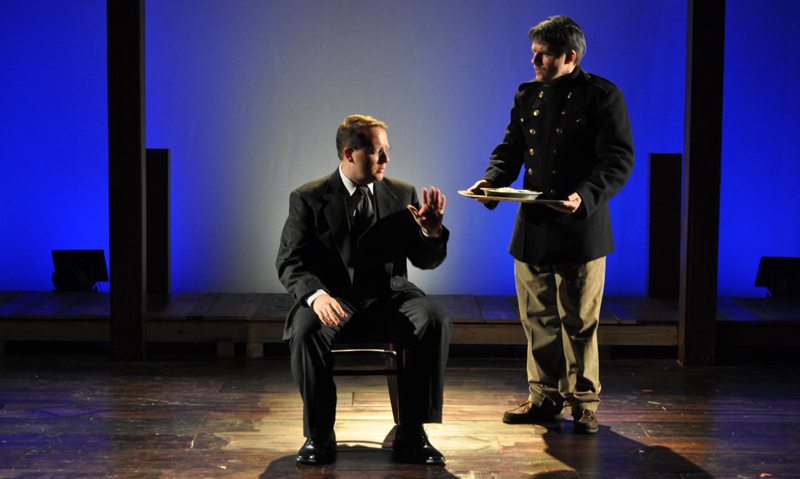 The musical is high historical drama, detailing the real 1913 trial of Leo Frank, a Jewish factory superintendent accused of murdering a young girl in Marietta, Georgia. Here, Michael Dragen anchors the show as Frank, a fussy worrywart and Yankee fish-out-of-water slowly stripped of his ego and his ambition as the town unites to find (and invent) the worst in him. Dragen’s performance is physically detailed and emotionally steady; his singing is unadorned, and more affecting for it.

Kimberly Horner turns in a committed performance as his wife, Lucille, though her voice can seem at times too brassy for the more haunting passages of “You Don’t Know This Man” and “All the Wasted Time.” An inconsistent Georgia drawl (which other MET actors wisely eschew) threatens to undermine her confident stage presence. But Horner hits her stride in the pacey Act 2, braiding Lucille’s ferocious determination with palpable warmth and tenderness.

But the show’s unmistakable highlight — in a supporting role, no less — is Vaughan Harrison as factory janitor (and slippery witness) Jim Conley. I have no pithy adjectives to deploy: Harrison is a star. His vocal runs on “Blues: Feel the Rain Fall” are so precise, so expressively handled, that I almost longed for some Mariah Carey showboating. And Harrison has the acting chops to match. He saunters, catlike, across the stage, effortlessly embodying the cocksure Conley.

One of Parade’s strengths is its broad, messy view of social justice. Uhry and Brown target not only anti-Semitism but also the racism that placed disproportionate weight on Frank’s trial. Songs like “Rumblin’ and a Rollin’” — well sung by Victoria Barbee and the perennially smooth Sam Salary — seem to implicate the playwright himself. There’s a black man swinging in every tree, they sing, but they don’t never pay attention.

Still, at times the musical seems overstuffed. Act 1 drags, packed with too many variations on the same theme: townspeople eager to distort the truth or believe the implausible due to growing anti-Semitism and insular Southern pride.

The direction — care of company artistic director Karen Paisley — alternately dazzles and disappoints. Some numbers suggest an exacting vision at work — “Big News!” is laced with scorching, vivid tableaux. But others suggest someone who simply ran out of time. The actresses who perform “Factory Girls” pace bizarre carousel circles around the stage, looking like confused ponies at a fair. And despite the spacious set, scenes are nearly always staged dead center (a tough trap to avoid with a flat back wall, yes, but a flat back wall is not tough to avoid).

Although the program doesn’t credit a separate lighting designer (Greg Casparian gets a nod for consulting and programming), the lights are a dramatic highlight. Saturated colors drench an expansive Cyclorama; the moody palette infuses scenes with an expressionist, almost dreamlike quality.

Brown’s songs feature finely interwoven vocal lines, and MET’s cast doesn’t always follow the right threads. But the logistics of the space tie their hands. Booming acoustics and limited stage real estate place the orchestra in the lobby, behind a curtain to dampen the sound. It’s effective from a sound-mixing perspective but prevents actors and musicians from following one another’s leads. Sunday afternoon’s performance was marred by unsteady vocal entrances and muddy full-cast numbers.

In her curtain speech on Sunday, Paisley hinted at a move late next season — to the old Warwick Theatre, off 39th Street and Main. The MET’s stage configuration has been an enduring gripe of mine that I’m ready to retire. The theater has the talent to tackle its ambitious repertoire. With a little luck, it’ll soon have the resources as well.