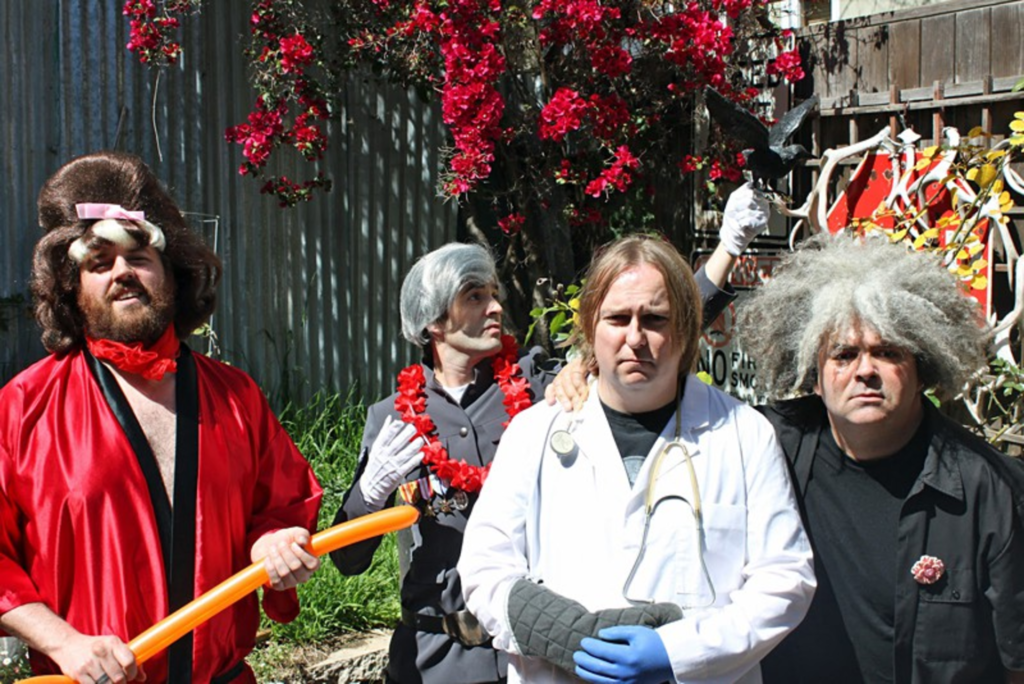 “I don’t know if people have any preconceived thoughts that this is going to be a quiet show,” says Melvins drummer Dale Crover. “But it’s certainly not going to be.”

He’s talking about his band’s new lineup, which is on its way to all 50 states under the name Melvins Lite. This Melvins alter ego features Trevor Dunn on acoustic bass. Even unplugged, Dunn has a history of taking the Melvins into heavy terrain. The Mr. Bungle alum filled in on electric bass in 2005, played with frontman Buzz Osborne in the rabidly experimental Mike Patton vehicle Fantomas, and did time in the Fantomas/Melvins Big Band collaboration.

“It’s called ‘Melvins Lite,’ ” Crover says, “but it’s not really that light. It’s an acoustic bass, but it’s got more low end than a normal rock-and-roll bass. It’s boomin’. I think people will be surprised at how big that thing sounds.”

Dunn opens Freak Puke, the new Melvins Lite album, with an ominous drone that showcases his abilities to create outlandish textures on the stand-up. Crover soon accompanies him on brushes, and it takes a good 10 minutes or so before the Melvins’ trademark tar-pit groove rears its ugly head.

“There’s no regular bass on the new record at all,” Crover explains. “It’s all acoustic, and it’s all miked. There’s nothing going through an amp.”

The idea struck when Osborne attended a performance by Dunn and Wilco guitarist Nels Cline (who, before joining that band, had built his reputation as a versatile player with an affinity for noise).

“They were doing weird, avant-garde jazz stuff,” Crover says. “It was nothing like traditional stand-up bass at all. He was making a lot of noise with it.”

Dunn makes plenty of his own noise onstage with Melvins Lite. And, as usual, fans can expect a career-spanning set list that’s unique to this particular group of shows.

“When we’re thinking of stuff that we’re going to play for a tour,” Crover says, “we work really hard on what we think will work and we try to make a nice, rounded show. We always play the same set for every show on a given tour. It just works out better that way. We view the whole thing as one big performance piece, from start to finish. It’s kind of like a play. A lot of bands change up their set list, and they say it’s because they get bored, but I never felt that way.”

After name-checking tunes from albums such as Honky and The Bootlicker, Crover adds: “We thought of a few songs that would be good for stand-up bass. The Bootlicker’s kind of a quieter record. But, then again, we’re not really afraid of any of the loud rock stuff. We always try to cover old and new stuff.”

The other members of the Melvins proper — bassist Jared Warren and second drummer Coady Willis — aren’t waiting at home. They’re set to share the Lawrence date with Melvins Lite, billed as Big Business. It’s one of only six shows where the two tours overlap, but Crover and Willis say plans are in the works to bring the two lineups together in the near future. (Melvins Lite also touches on material that the Melvins recorded with Warren and Willis.)

And brace yourself for more confusion. Several other incarnations or spinoffs of the Melvins are gearing up for activity. Mainstays Crover and Osborne recently recorded a song with former bassist Kevin Rutmanis and iconic former Dead Kennedys leader Jello Biafra, marking a renewal of the two albums that the duo recorded with Biafra a few years ago. This month Crover and Osborne also release a vinyl EP — under the name Melvins 1983 — that includes Crover’s predecessor, original drummer Mike Dillard. (There are Melvins 1983 shows in the works.)

Got all that? There’s more: Crover says more of the 50 or so songs that Melvins Lite recorded with Dunn, over two months last winter, are slated to see daylight soon. “I’m guessing that our next record will be a combination of some Jared and Coady stuff, some Trevor stuff, and then some other newer stuff that we’ve done,” he says. “We’ll see.”

But what will they call it? Melvins Ultra-Heavy Lite? The Melvins/Big Business Big Band (featuring Trevor Dunn)?

“I imagine we’ll just call it ‘Melvins,’ ” Crover says with a chuckle.

Whatever he and his bandmates call themselves from one tour to the next, they’re having the last laugh. Instrumental in the genesis of what would somewhat fallaciously come to be known as “grunge,” the Melvins have outlasted and, in many ways, outdone all of the Seattle bands that claimed them as an influence. The band’s recorded output dwarfs the number of albums of Mudhoney, Nirvana, Soundgarden and Alice in Chains combined.

The longevity is about more than that kind of volume or the other kind. Osborne and Crover trafficked in single-minded abrasion early on, but the Melvins’ sonic risk-taking and experimentation have long since sent the Melvins past even their most ambitious former peers. Pushing up against its 30th year, the band might be entitled to take stock of its legacy — if it wasn’t so busy.