The Lucky discuss the evolution of band, release new record at RecordBar on Friday 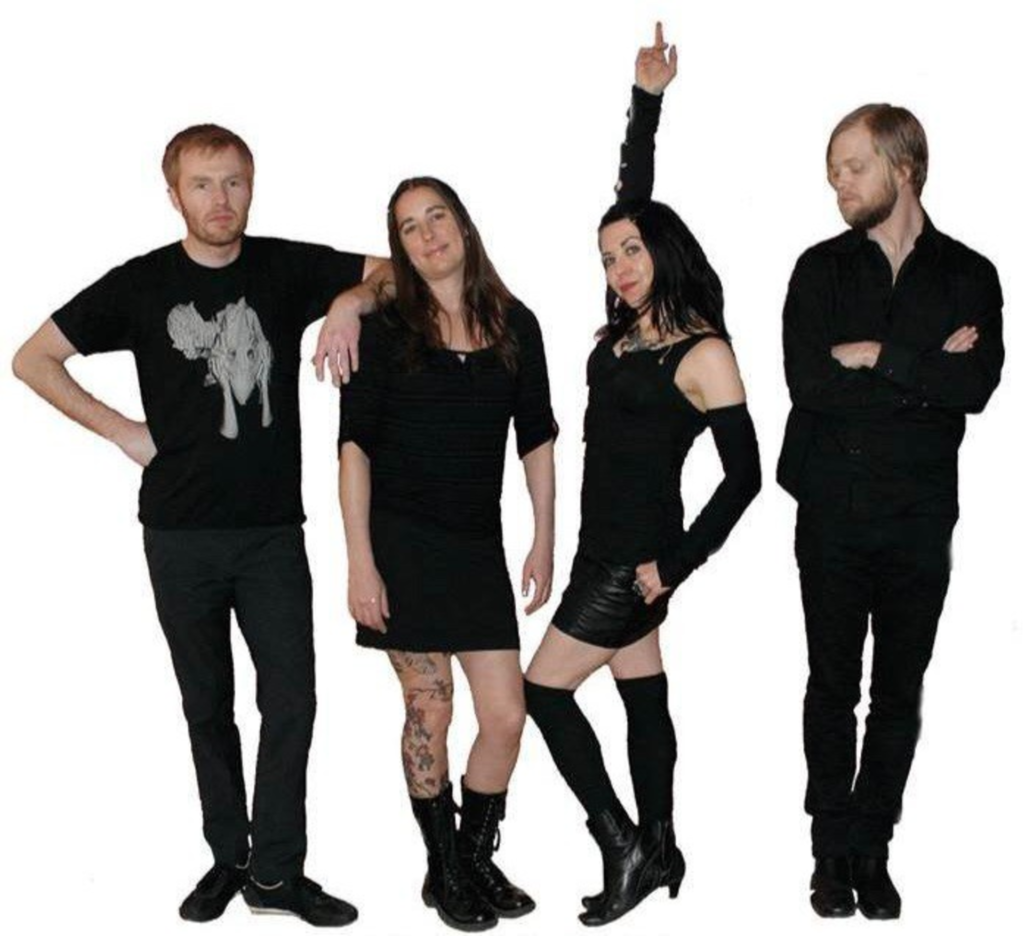 Before cranking up Swimming Invisible, the raw, loud, energetic first full-length album by local punk band the Lucky, make sure no children are around – or your mom and dad, for that matter. I inadvertently started rocking out to “Sex Dream,” the band’s ode to somnolent sensuality, while lounging on my parents’ couch a couple of weeks ago. I snapped my laptop shut right as vocalist Camilla Camille was about to launch into the chorus: Pump it like a sex dream. Pump, pump!

I wanted to leave as quickly as possible so I could listen to the song again and turn it up louder. Such is the essence of the Lucky – fun, rowdy, occasionally subversive, and a little bit naughty. According to lead guitarist and vocalist Iason Mac Ai, who rounds out the lineup along with bassist Calandra Rene and drummer Dustin Mott, the Lucky’s live shows are quite the spectacle as well.

“We’re a lot more dynamic and entertaining now that we’re a four-piece and Camille is running around singing and being a front person, because she’s a natural in front of a crowd,” Mac Ai said when he, Camille, and Rene sat down with The Pitch to discuss the album, set for release on May 23. “She was born to be on stage dancing and singing.”

With long, dark hair and a lithe physique, Camille hits the stage like a live wire bouncing on asphalt. She may have been destined for the spotlight, but she and the Lucky’s other members have had plenty of practice honing their craft. Mott has a degree in percussion from Missouri Western State University and is a member of the Waldo Jazz Collective, and Rene also plays bass for Chris Meck and the Guilty Birds. With more than 16 former bands between Camille and Rene alone, these veterans of the KC scene know what makes a group tick. One of the keys for the Lucky has been collaboration.

“There’s no complaining, and everybody gets along and respects each other,” Rene said. “That can be hard to find in any relationship in general – and especially in bands. That makes it really nice.”

“We’re all invested and contributing, and it’s like a single unit,” Mac Ai added. “It’s a lot more fun now.”

Turning the Lucky into a high-octane band with four committed members has been three years in the making for Camille and Mac Ai, who played their first show at Coda in June 2012. A year earlier, the two guitarists bonded over their shared love of music, spending their evenings jamming together on the porch. For Camille, this connection quickly blossomed into something more substantial. As she wrestled with her feelings for Mac Ai, she wrote the contemplative song “Owl & Me.”

“I was in a thrift store and I came across an owl necklace, and I thought, ‘Oh, that’s great – that can represent wisdom, and it will guide me on what’s the next best thing to do,'” Camille said. “Because I couldn’t decide whether I should tell him that I liked him. I wrote that song about making that decision. And obviously I decided to tell him – I just couldn’t contain myself.”

At that time, Camille had recently left the band We Agnostix, and she persuaded Mac Ai to start playing shows with her. Instead of writing new material together, the couple played each other’s songs.

“We were totally like Lennon and McCartney – whoever sings it wrote it,” Mac Ai said.

Then the game changed. One night after a show at the Brick with drummer Jonathan Thatch, who occasionally played with the duo, producer Andrew Rolston approached Camille and asked if she wanted to record a CD.

“I thought he was some dude who was just talking big, but then we followed up and he was for real,” Camille said. “And he’s been with us ever since.”

Similarly, after Camille came up with the idea for “Gay Night for the Straight Kids,” a catchy celebration of those drunken evenings when two same-sex friends just can’t contain themselves, Mac Ai started writing the chorus. And Mac Ai also added a guitar solo to Camille’s song “Owl & Me,” allowing each artist to leave a unique stamp on the track.

The result is a lively, tough-to-define sound influenced by everything from PJ Harvey to Turbonegro and Eric Clapton to the Beatles. Camille calls it “alternative rock with influences of riot grrrl and punk.” No matter what you call it, you’ll want to turn it up.

The Lucky’s CD release party is at RecordBar at 8 p.m. on Friday, May 23 with Sextonic Plates and Now/Here. Details here.