The Legend of Georgia McBride, at Kansas Repertory Theatre, is a great escape 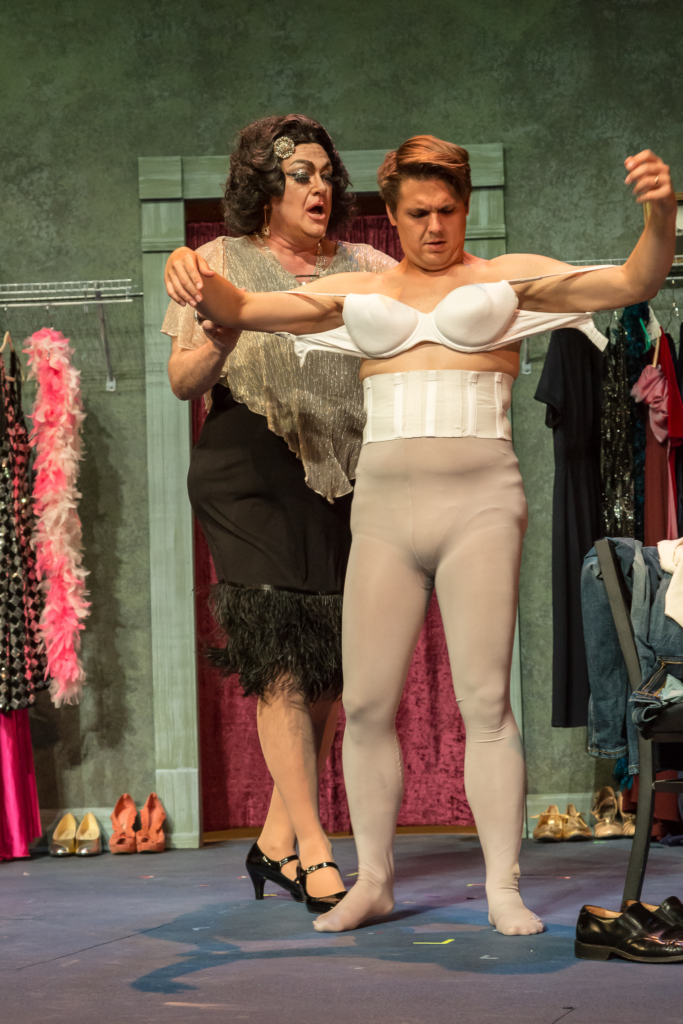 A university theater espousing “diversity, equity and inclusion” is staging a show that, given our current reactionary reality, feels slightly subversive — even downright liberating. In the Trumpian age, it’s like being home again, the kind of home that makes wedding cakes for gay couples.

On the University of Kansas campus, Matthew Lopez’s 2014 play, The Legend of Georgia McBride, under the fine-tuned and upbeat direction of Peter Zazzali, is running in repertory with the Missy Koonce-directed La Cage aux Folles, making Kansas Repertory Theatre’s “summer of drag” a welcome response to what has been a drag of a summer.

Georgia McBride reflects the versatility, too, of a playwright who’s known for, among other works, the post-Civil War drama The Whipping Man (produced by Kansas City Repertory Theatre in 2012) that takes on issues of religion and race. The newer McBride, on the contrary, is a joyful, deeply funny — even celebratory — piece that is, at times, heartwarming and a little ribald.

Local drag queen Deja Brooks (aka Brandon Eisman, who had a following in attendance on opening night) takes the stage 10 minutes before curtain to dazzle and work the crowd. “These eyelashes,” she complains, when she doesn’t at first see a familiar face. Arrive in time, so you don’t miss her shtick.

Eisman has a role in the show as well, as down-on-her-luck drag queen Rexy, who arrives in the Florida panhandle’s Panama City — or “hell,” as her colleague Miss Tracy Mills (Phil Fiorini) calls it — to take a new gig. They’ve both been hired at a small club to replace Casey (Duncan McIntyre), an Elvis impersonator who can’t draw the crowds.

The young Casey can’t make rent or pay the bills, and his newly pregnant wife, Jo (Gabrielle Smith), frets (an understatement). The drag queens’ arrival means he must give up the blue sequined jumpsuit — and his Elvis dreams — for a stint behind the bar. But when a drunken Rexy falls off her roller skates, he steps into her pumps. Reluctantly. Awkwardly. When he claims it’s a one-time thing, Tracy says, “If I had a dollar for every straight man who said that to me.”

It’s the gradual transformation of Casey’s performance persona and, ultimately, his self-image — and how he blends his personal and professional lives, or not —that’s at the center of this extremely entertaining yet thoughtful play. 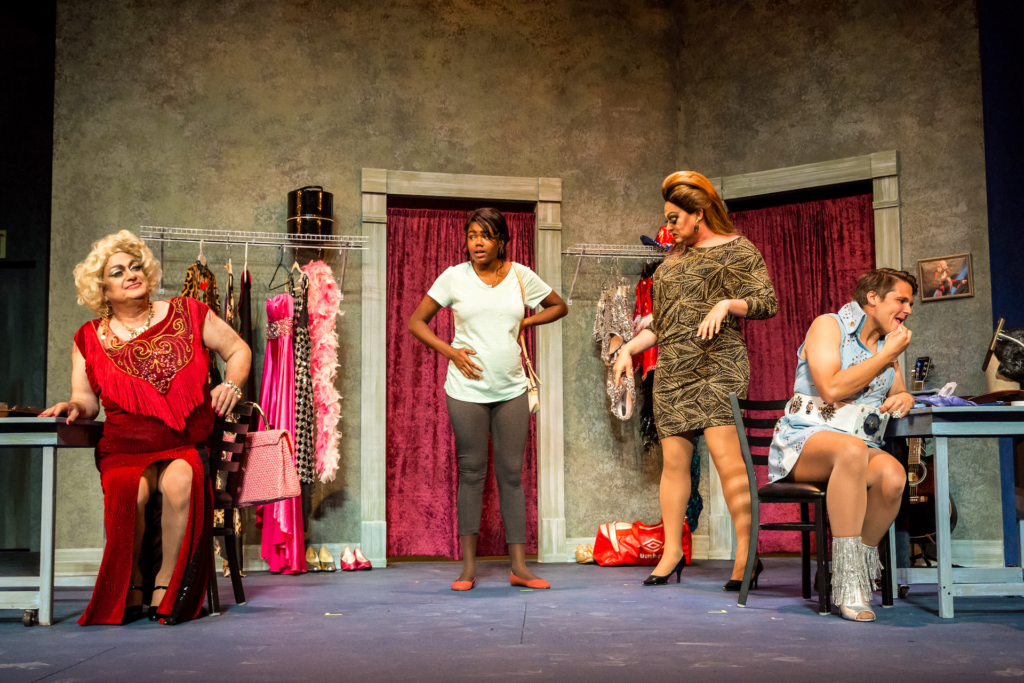 Fiorini and McIntyre are excellent in leading roles. McIntyre exudes both charm and innocence as a pizza-eating guy-next-door, and we’re all anticipation as he makes a series of drag-queen debuts (choreography and music design by Jake Fisher), including the undergarment fascination of his first drag-performance prep and his Edith Piaf impersonating forays. Fiorini gives his Miss Tracy dimension as well as flair, and spits out quips and one-liners with consummate delivery and precision.

As night-club owner Eddie, the adept Brian Patrick Miller is very good as an ill-at-ease MC, announcing club performers with awkwardness and an almost Ben Stein monotone, and who grows into a slicker entrepreneur. Eisman’s charismatic presence conveys a proud Rexy who’s all sass and bite and injured dignity. (Smith, as Casey’s wife Jo, and Leon Cambridge, as neighbor and landlord Jason, do able supporting work.)

Zazzali keeps the pace peppy and scene changes brisk. A rotating set spins in only one direction but becomes part of the show’s choreography (set design by Dennis Christilles). Glamorous costumes (by Kelly Vogel) suit the showbiz scenes.

The Legend of Georgia McBride is a fun, funny, and touching show that takes our minds off our worries, for a while. It is onstage during Fringe but is its own kind of fringe fest.