The KFC Lifetime ‘mini movie’ A Recipe for Seduction gives Mario Lopez 15 minutes to cosplay Colonel Sanders, for some reason 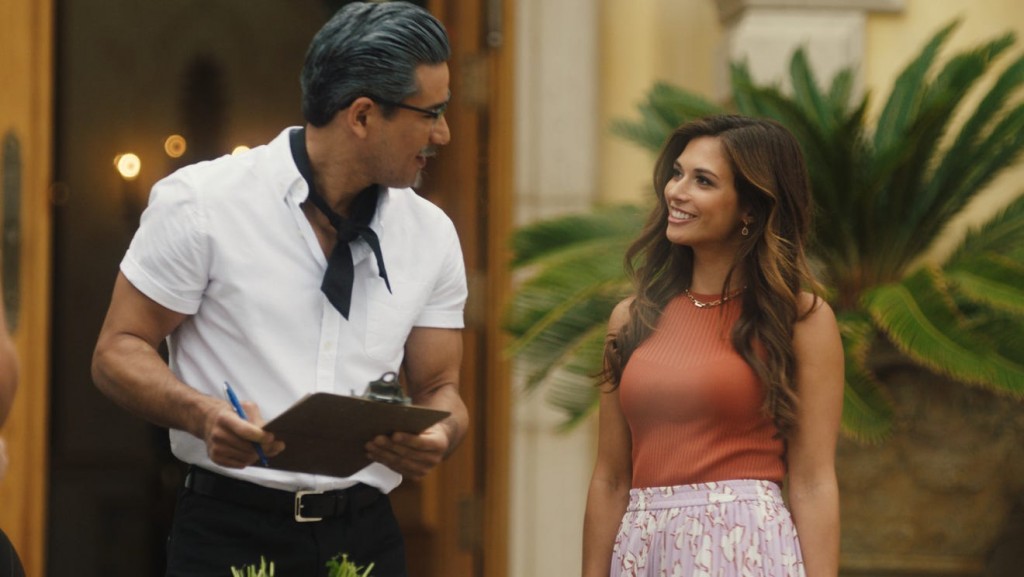 Mario Lopez and Justene Alpert in A Recipe for Seduction. // Courtesy Lifetime Television

It’s the most wonderful time of the year. Time to gather in front of a cozy fire with loved ones, sip hot cocoa, and watch the best/worst movies known to mankind: holiday romcoms. Time to follow along as the beautiful, young lawyer/real estate agent/baker who hates all things Christmas finds herself falling for the incorrigible knight/ghost/other baker who just can’t get enough of it. With his help, our heroine will learn not only to love, but also the true meaning of Christmas: fried chicken.

This year, Lifetime and Kentucky Fried Chicken have teamed up to present us with a very special holiday mini-movie: “Recipe for Seduction.” Why? No one knows.

Mark your calendars because Lifetime and @KFC have partnered for a Lifetime Original Mini-Movie you don't want to miss! "A Recipe For Seduction" starring @MarioLopezviva premieres Sunday at 12PM. pic.twitter.com/nZJ2PXUR6G

Anyone who has paid attention to the quick-service restaurant lately will recognize KFC’s unique marketing approach. You may recall that in previous years, KFC has blessed fried chicken fans with the Limited Edition 11 Herbs and Spices fire log to keep them hot and crispy during these cold, winter months.

This year, they’ve found a different way to warm consumers: by offering a sexy new iteration of Colonel Harland Sanders (portrayed by Mario Lopez), or as he will forever be known in my heart, KFC Slater. The Colonel is no stranger to romance; he’s already starred in both a romance novel and dating sim, but does he have what it takes to deliver a holiday rom com hit?

Sort of. The mini-movie ticks off plenty of boxes in the holiday romance tropes list. A loveless starter relationship? Check. Meddling mother? Double-check. Gay best friend whose only purpose is to be a sounding board for the heroine? Obviously. Absurd escalation resulting in an attempted or successful murder? It wouldn’t be Christmas without it!

“Recipe for Seduction” follows the rom-com formula for success just as faithfully as KFC follows their own secret chicken recipe. The plot centers around rich-girl Jess. After rejecting her boyfriend Billy’s engagement proposal, Jess falls in love with the resident chef her mother has hired for their two-person family, despite the fact that they’re so bankrupt their mansion is about to be repossessed. Bunny, Jess’s mother, will do anything it takes to ensure Jess and Billy marry: eavesdropping from around every corner, stealing her daughter’s phone, promising to sleep with Billy if he marries Jess, and attempting two murders!

The drama that unfolds doesn’t hold up to any amount of scrutiny (marry the rich man yourself, Bunny), but that’s arguably the same for any cheesy holiday movie. In the end, Jess and Harland marry, Bunny gets sent to a “wellness center,” and Billy plots revenge while biting into a delicious drumstick. As a viewer, my only complaint is that they didn’t write in nearly enough chicken-based one-liners. Not even a single, “Have a Kentucky Fried Christmas!” KFC, if you’re reading this, I’m available to work on the sequel.

“Recipe for Seduction” is available to view now on the Lifetime website, app, and video-on-demand.

Maybe the funniest part of the KFC Lifetime movie is knowing that they absolutely shot it during the pandemic. This was absolutely filmed at the risk to the lives of all involved, to make sure that we know Colonel Sanders fucks. Die For Brands. Die For Content. Live Forever.

We’d also be remiss to not mention I Love You Colonel Sanders, a previously released dating sim game where the player must seduce Colonel Sanders. Is this all insane or brilliant or terrible? I guess it doesn’t matter so long as we’re engaging. God bless you, nightmare brand content.