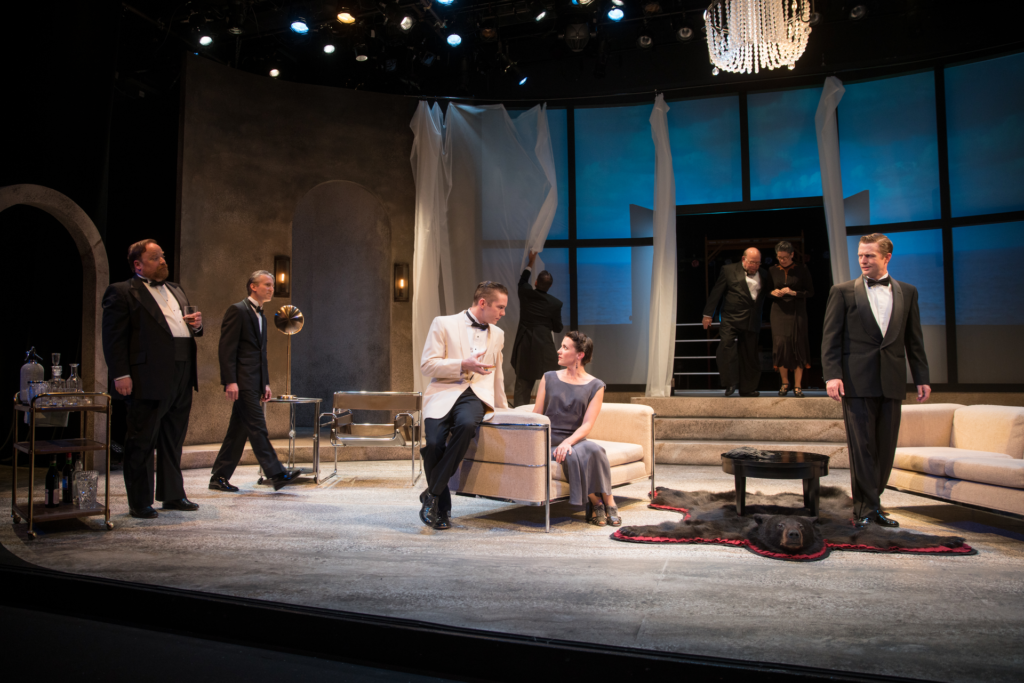 Great theater often challenges, provokes, disturbs. It creeps into our comfortable lives and knocks the shit off our metaphorical nightstands, forcing us to reconsider why we’d gathered all those things in the first place.

But sometimes, we grow tired of all that mental rearranging and just want an escape. Sometimes, the leader of the free world decides to treat nuclear war like a game of chicken against a young dictator with nothing to lose. Sometimes, a bunch of cleft-brained Nazis feel like huffing citronella fumes and hoisting balsa-wood shields on their way to the world’s worst LARP sesh.

At such moments, one reliable escape is a good mystery, one that lets us temporarily brush aside whatabout-ist cawing and plugged-ears kumbayahing and take solace in the company of non-ideological murderers and thieves.

The Kansas City Actors Theatre has precisely this kind of antidote in And Then There Were None, a racing Agatha Christie whodunit infused with old-Hollywood glamour.

The title comes from the last line of “Ten Little Soldier Boys,” that bloody old nursery-rhyme countdown. The full rhyme is engraved on a plaque over the fireplace at the Owen residence, a seaside mansion on a remote island off the coast of Devon. Ten strangers have gathered there, each answering a mysterious summons. None of them has ever met the owners. And as the guests begin to die in grim accordance with the rhyme, we begin to suspect that none of them will.

Christie’s script adheres to the conventions of a cozy murder mystery (romantic subplots, uneasy alliances, hidden identities) while striking a uniquely sinister tone. Early in the play, we learn that the guests may not be so innocent. A strange voice on a gramophone recording accuses each of a past murder, setting the tone for the perverse reckoning to come. 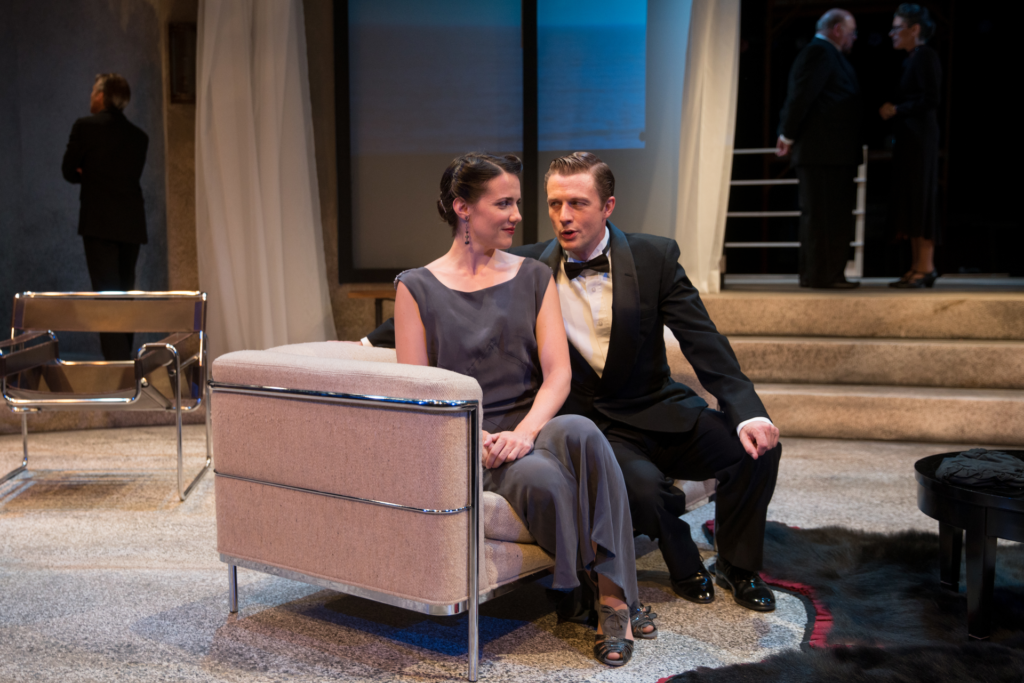 KCAT’s cast renders each role capably, in varying shades of ham. Among the strongest performers are Manon Halliburton (channeling Mrs. Danvers as the puritanical Emily Brent) and Matt Schwader (channeling Jay Gatsby as the jocular Philip Lombard). Ellen Kirk evokes the chilly humor of Ingrid Bergman as the ersatz ingénue Vera Claythorne, and Robert Gibby Brand is hypnotizing and haunting as the delirious General MacKenzie.

Victor Raider-Wexler is excluded from the above list only because I’ve grown weary of drumming up superlatives for him; he’s brilliant here (as the crusty justice Sir Lawrence Wargrave), as always.

Director John Rensenhouse knows how to handle a mystery, a more difficult task than it seems. The key is his fastidious attention to detail, most notable in subtle gestures and blocking that implicate multiple characters for each murder. Emily Brent crosses to the window and lingers suspiciously over the brandy; William Blore (Matt Rapport) hands a cup to another guest, his palm tented curiously over the top. 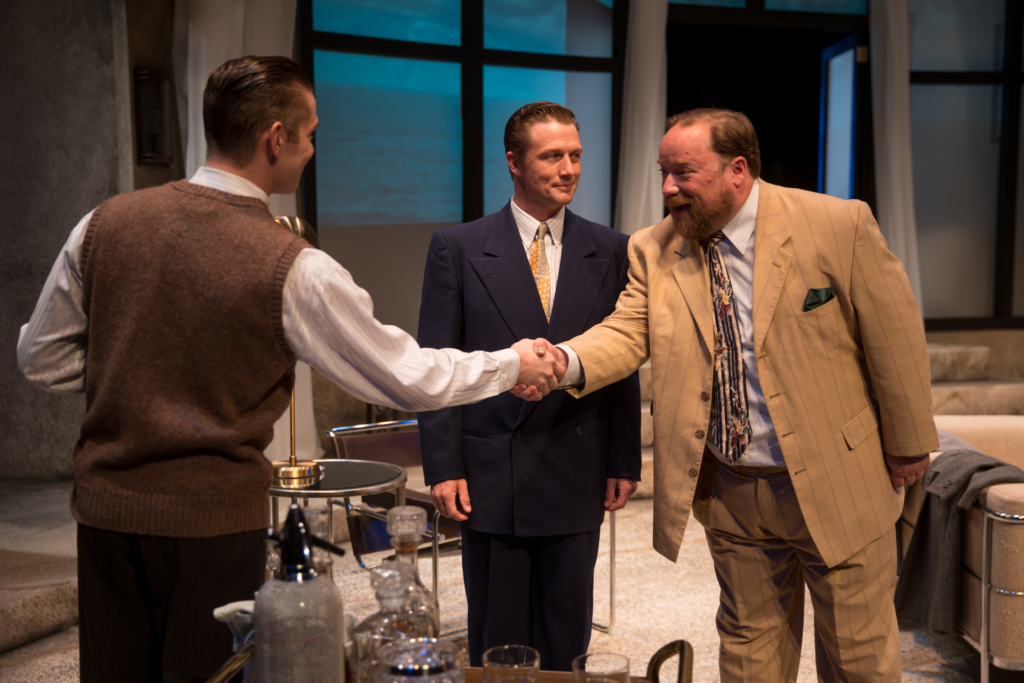 The production is ripe with these little misdirections and red herrings, demanding (and earning) our rapt attention. Christie and Rensenhouse have produced a mystery clever enough to make us feel like we’re chasing a moving train, but not so opaque as to make us feel we’ve missed it entirely.

The design is equally stylish. Every aspect of Mark Exline’s set is glamorous, from the curved walls and the gleaming midcentury furniture (on loan from Retro Inferno) to the gauzy floor-to-ceiling drapes (reflecting color and lending a hazy quality to Shane Rowse’s skillful uplighting) to the dazzling rear projections of animated waves beneath uncanny, motionless clouds.

Also luxurious: the three-hour run time, which somehow still feels too short. Thanks to Rensenhouse and his cast, there isn’t a moment of dead air: I longed to spend more time with these well-heeled villains. 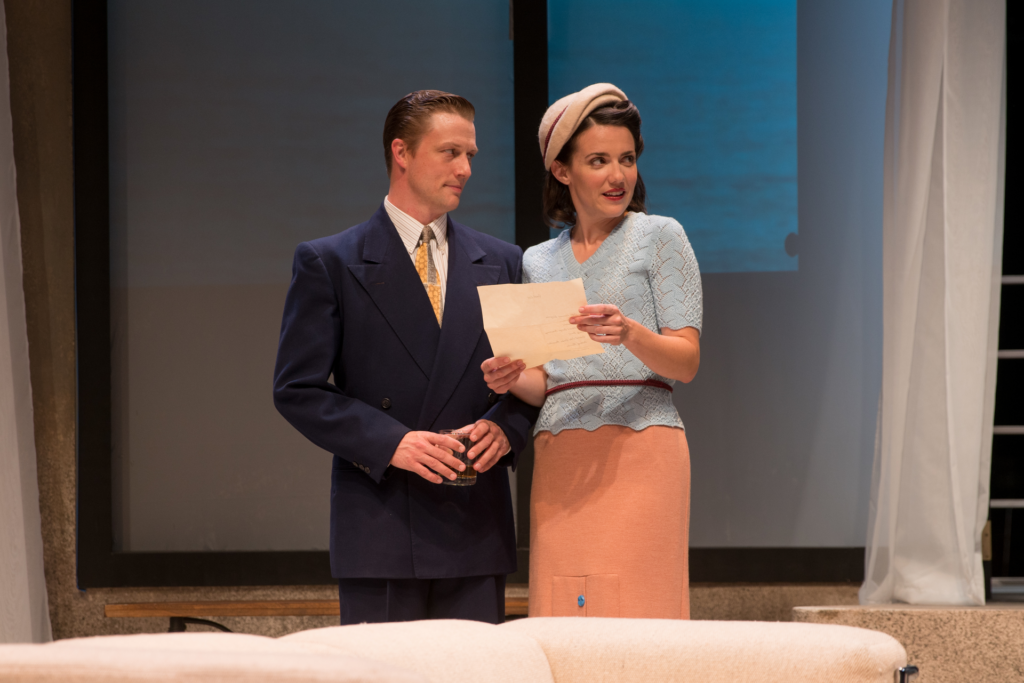 Part of that may be the inherent pleasure of the genre. A good mystery sates our human desire for soluble problems in an uncertain world. It assures us that, if we’re simply clever enough, attentive enough, attuned enough to our environment, we, too, can play the hero and skirt despair in the nick of time.

In other words, it’s a fantasy.

Rensenhouse seems aware of both this impulse and its naiveté. One of the most devilishly frustrating riddles of the show is the progressive disappearance of 10 little soldier figurines, small statues that drop from the mantelpiece with each new murder. We long to catch the culprit in the act of removal. We stare at the fireplace, certain we’ll catch it this time. We never do.

And Then There Were None makes for a great evening of escapist theater, but it’s also Agatha Christie at her most nihilistic. The Kansas City Actors Theatre’s transcendent production reminds us that style is no substitute for (moral) substance — and that justice is not only blind but dumb.

And Then There Were None