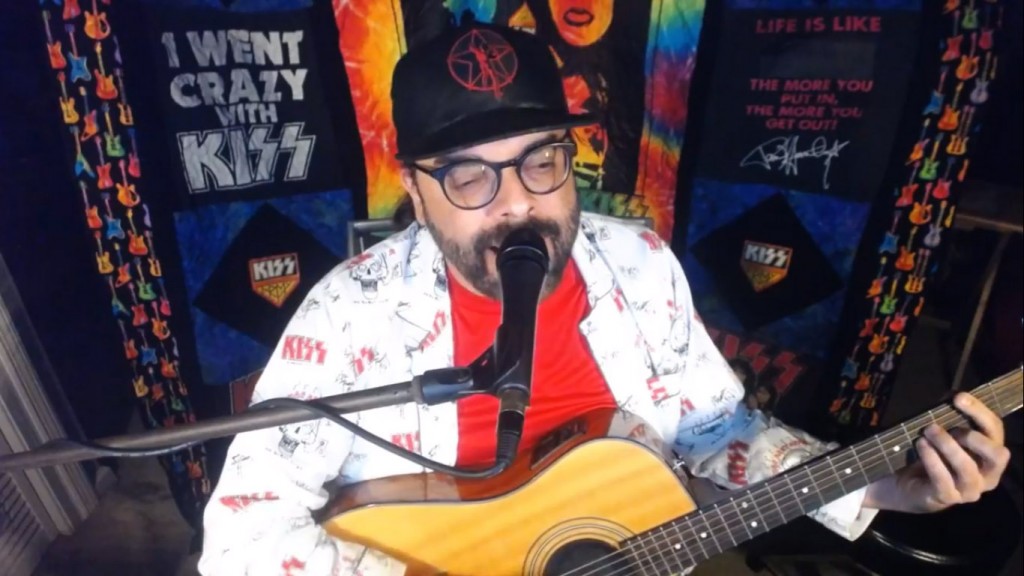 Scotty McBee performs on a livestream as part of the KC Online Live Music Series.

If you’re getting restless without regular evening outings to bars and clubs, or even if you’d always rather stay in your pajamas and lounge in your living room, artists from all over Kansas City have your evenings covered.

The bonus is that while they’re entertaining you, you can help them make up for income they’ve lost by all the venue closures. The KC Online Live Music Series is an effort from artists themselves to make their performance heard not just around the metro but around the world.

“I got the idea to do this a couple weeks ago when everyone’s gigs stated getting canceled,” said local musician Crystal Gatewood. “For some of my friends, it’s their only income… everyone was freaking out and devastated and worried.”

She sings in a duo, Beauty & The McBeest, with Scotty McBee, who is a fulltime musician.

“I told Scotty, ‘You need to do some online videos.’ I waited a week, and I just decided I’m going to develop this for them and help out local musicians,” she said. “The community really needed it. The community needs to be lifted right now. Artists and entertainers kind of have a duty right now to lift people’s spirits.”

“I’ve had artists call me after the show and say, ‘I cried for 15 minutes, Crystal. It meant that much to me,’” she said.

“It started blowing up and I was like, ‘Oh my God, what did I do?’ I’ve been working day and night at the point now, trying to get people on board who can help collaborate and be a resource,” she said.

Those resources include Jack Crouch, who’s been putting his technical sound knowledge to good use, and KC Mega Jam’s Adam Buford, who’s been helping with publicity.

Getting everyone set up to perform in their own homes is more complicated than just setting up a phone camera in a corner. That’s where Crouch comes into the picture.

“It’s whatever equipment that people have in their homes. He’s trying to get people optimized as much as possible with their technology. People are at all different levels of equipment and tech knowledge,” Gatewood said. “He dropped off a webcam to one of the musicians on their porch. He sterilized it, and they sterilized it.”

Gatewood said all musicians of any style are welcome. They’ve hosted everything from classic rock bands to a violin-cello duo. All they have to do is send a private message to the Facebook page with their contact information and samples of their music.

All the performances have to be at least 30 minutes, and Gatewood recommends that they don’t extend longer than about two hours.

The series has drawn viewers not just from the Kansas City metro but from areas as far afield as Ireland, the Netherlands, and Canada.

“People are asking if this is something that could be sustainable even after the quarantine,” she said. “Introverts love to see local live music but not necessarily going to go to a crowded bar.”

Gatewood herself isn’t taking a cut from any of this. The way it works is that the musicians perform, and the audience tips them via PayPal, Venmo or Virtual Tip Jar. That’s worked out well for The Stolen Winnebagos, an eclectic cover and variety band.

“We were all a little anxious about it, because it was really different,” said guitarist Casey Hebberd.

He and his two bandmates took time to read the online comments and interact with viewers between songs.

“When we do a live show, we rarely stop between songs because people are dancing,” he said.

The band’s performance came immediately before the stay-at-home order. Because the band can’t be together at the moment, Hebberd’s next online show will be of the solo acoustic variety.

Another positive note of the performance was that viewers did tip their appreciation, and the band “did very well, monetarily,” he said.

Although Hebberd enjoyed the performance, there were a few hiccups along the way.

“The technical aspect of it was difficult, and I think it was more difficult than I expected,” he said. “When we were trying to get the sound to work as a full band, we couldn’t tell what was being put out there.”

Despite that challenge, it was a good experience.

“I would recommend anyone trying it at least once,” he said.

To check out this week’s concerts, go here.