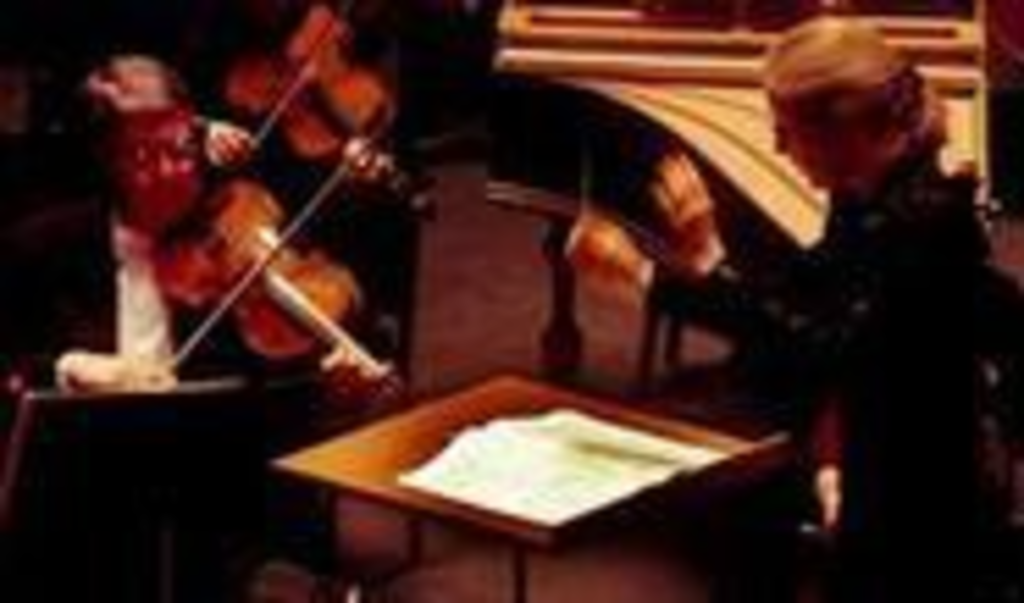 The real joy of this year’s Kansas City Symphony has been the aplomb with which it has handled a drastic reversion in its repertoire. With Anne Manson’s ascension to the podium, our local orchestra has found a revitalized, decidedly more modern sound to complement the expanded breadth of its performances. Manson has shown a willingness to juxtapose baroque and classical standards with more difficult gems, and Friday’s performance was an example of both the positive and negative aspects of this decision.

A jaunty, vibrant reading of Mozart’s “Overture to the Abduction from the Seraglio” commenced the program. Always a crowd-pleaser, this fiery little piece was wonderfully and gracefully examined by the musicians. In an attempt to provide a Turkish feel, Mozart complemented his tune with a dynamic percussion accompaniment, which Manson chose to handle in an understated manner. This allowed the beauty of the music to shine, especially in the slower passages, while providing a dramatic flourish at its beginning and end.

The size of the ensemble was dramatically reduced for Bach’s “Brandenburg Concerto No. 1.” It is rare for a major orchestra to try its hand at such a mainstay of the baroque period. Manson has a history of conducting smaller chamber orchestras, however, and she clearly feels that she can compete with the many early music groups performing Bach’s works on a regular basis. Sadly, however, the symphony’s version of this perennial favorite was lacking in the grace necessary to accurately convey Bach’s music.

The horns, usually a bastion of strength, were decidedly sloppy in the concerto’s first movement. This caused a disconcerting, echolike effect that managed to draw attention from the strings’ delicate beauty. The problem with chamber music is that smaller ensembles mean more exposure for the musicians, and, therefore, mistakes are magnified. The remainder of the Bach was much tighter, but the lack of coherence in the first movement managed to undermine the entire piece. Guest Concertmaster Vahn Armstrong provided some beautifully elegant work on the violin, and a lovely duet by the flutes and bassoons exhibited the layered complexity of Bach’s writing.

The undisputed highlight of the evening came after the intermission, when the orchestra took on the dense, majestic “Symphony No. 4” of Mahler. Surprisingly sunny for Mahler, this work starts with a series of themes passed, seemingly at random, between orchestra members. Making sense of this difficult score can be a trying task, but the musicians performed wonderfully. Manson handled the score at a stately pace, and her conducting allowed the music to breathe, reducing the rushed feeling that oftentimes accompanies performances of Mahler’s work. The cellos were radiant in their performance of the first movement’s secondary theme, and the horns acquitted themselves with some fine, vibrant phrasing.

The second movement featured Armstrong on a folksy violin, fiddling the role of death to the orchestra’s bombastic accompaniment. While interesting, this music was a mere precursor to the sublimely enigmatic adagio of the third movement. This was a prime example of the improvement Manson has brought to the orchestra. In the past, players would have rushed through this set of variations on one of Mahler’s most beautiful themes. Instead, they took the music slowly, allowing it to build to an almost startlingly glorious crescendo.

The final movement was not as relentless, but it was equally stunning. Soprano Patrice Michaels Bedi accompanied the orchestra, giving a superb reading of Mahler’s depiction of life in heaven. Michaels Bedi’s brittle, finely colored voice at first seemed too small to compete with the orchestra. Her expressiveness was endearing, however, and she quickly won over the crowd. Between verses, the orchestra swooped and moaned, providing a somewhat ambivalent picture of heavenly life. This was a remarkable performance of a piece that would have been too challenging for the Kansas City Symphony to handle two years ago. Let’s hope that Manson can bring this much poise and intensity to every piece the ensemble performs in the future.