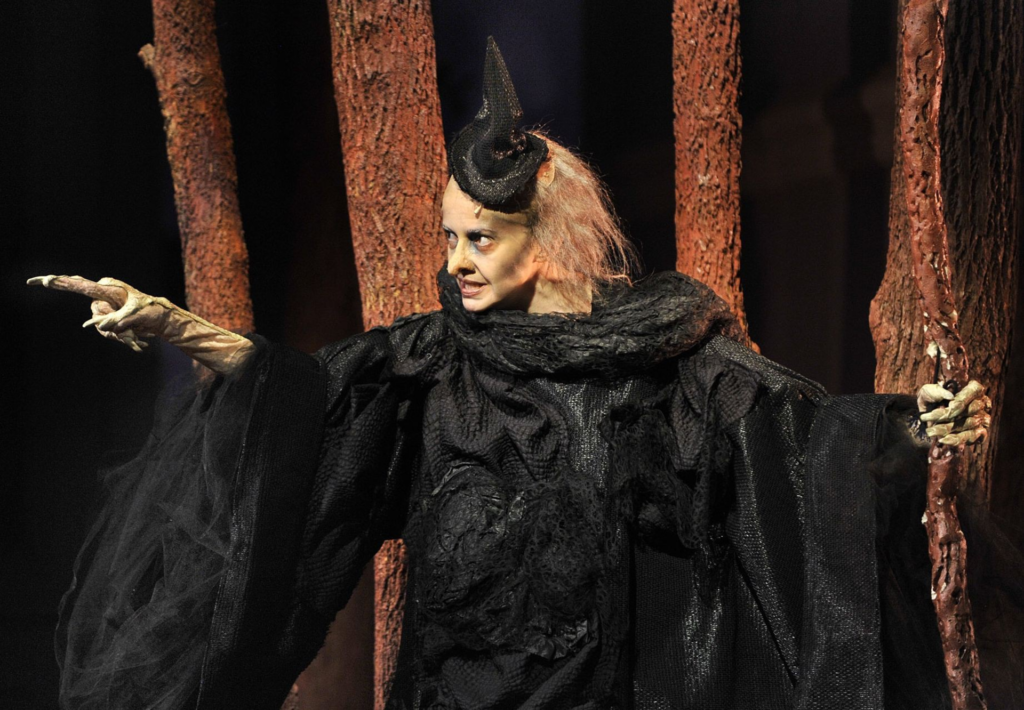 Sparkling, joyous and black as pitch, the wonders of the Kansas City Repertory Theatre’s marvelous new production of Stephen Sondheim’s Into the Woods could manifest themselves only in the theater.

Director Moisés Kaufman and the Rep’s distinguished design team have dreamed up a sumptuous fairy tale, an enchanted forest touched by nightmare, that matches the dark allure of Sondheim’s score. Because this is theater, we’re privileged to dream it with them. Set designer Narelle Sissons’ stark woods suggest mysteries beyond those conjured up by James Lapine’s script, which mashes up the stories of Cinderella, Little Red Riding Hood and others into this tale to end all tales.

A wheeled, puppeted cow mooned over by Jack (of “and the Beanstalk” fame) delights us with a few primitive double takes, and a stallion suggested by a tricycle seems to have rolled right out of the grandest Victorian toy box. Later, when the story grows too big for even these designers, we do the dreaming for them. A giant, a beanstalk, the foot of fate or God (or whatever) stomping through the dark second act — these wonders are collaborative. They spring to life because we believe.

None of this imaginative extravagance overwhelms the score, which is one of Sondheim’s best. Its anxious marches cheer and harrow, as the tales require. The first act offers a series of great tunes growing out of one another, many as to-the-point as pop, others heeding the Sondheim tradition of gorgeous melodies bubbling up from dissonance. As a cackling witch, Michele Ragusa triumphs with the run-on, double-time exposition of “Greens, Greens” and the latent hip-hop.

As always, Sondheim’s rhymes surprise, as when Jack (K.C. Comeaux), charged with selling his beloved cow, answers his mother’s command of “into the woods till journey’s end” with the plaintive “into the woods to sell a friend.”

Kaufman’s cast hails from Broadway and Kansas City, and locals such as the affecting Comeaux, Patrick Du Laney (a daft steward) and Lauren Braton (a ululating Rapunzel) are right up-to-snuff. Still, it’s the out-of-towners who command the show’s greatest moments: Ragusa, playing her wicked witch as an impossibly tough-minded single mother, belts as well as she cackles.

The nimble, inventive Dana Steingold discovers the fun in Little Red Riding Hood, who snarls a lot but finds the sexed-up wolf who chases her more inviting than she should. Euan Morton narrates with a light touch, elevating a traffic-cop role to something more akin to Puck. And Zachary Prince and Brynn O’Malley stir uncommon feelings as a baker and his wife, an ordinary couple whose troubles dispatch them into those woods and into all these fairy tales.

The story of the baker and his wife gives the first act its spine. Cursed with infertility, the couple discovers that the witch will grant them a child if they collect for her four items of minor enchantment — items that, amusingly, belong to Jack, Cinderella, Little Red Riding Hood and Rapunzel. After much memorable comedy, some well-staged scares and that string of great tunes, the show rouses itself to a false ending: the act’s end comes just after all the problems have been solved and everyone should be getting on with the happily ever after.

By design, the second act satisfies less. Here, terror crashes down from the heavens. The woods lie wasted, fate has turned cruel, the heroes gulp back regrets and blame each other. It’s the happily ever after as hangover, weighted with Sondheim’s great theme: the feeling that life hasn’t worked out the way you had hoped, but you keep putting it together because you’re still here.

Riches still abound. Two dashing, hammy Prince Charmings (Claybourne Elder and Brandon Sollenberger) reprise their comic duet “Agony,” a ditzy crowd-pleaser that, here, seems to best Sondheim’s immortal “Everybody Ought to Have a Maid.” The brooding “Last Midnight” gathers up slowly and dangerously like a storm, and Ragusa’s heavens-breaking treatment might be the show’s most powerful moment. And as she descends from princess back to peasant, Lauren Worsham’s Cinderella discovers at each step a tender resolve, moments of small grace that affect as much as the big numbers. For all the spells and giants he’s wrangling, Kaufman always emphasizes the human drama.

Unfortunately, toward the end, Sondheim and Lapine neglect that drama. Several soliloquies present the characters as searching for meaning in everything that has happened. These smack of intellectual justification for the grand fun of the first half, when layers of parable and psychology found all the necessary meaning. Despite toying with the impossibility of happily ever afters, Sondheim and Lapine sill settle on a fairy tale wrap-up, one impossible from the Grimms but common to Hollywood. With that ending, the music wells to yet another new peak, and Kaufman’s staging is magnificent.

Dreams rarely satisfy, either, but I can’t wait to dream this one again.