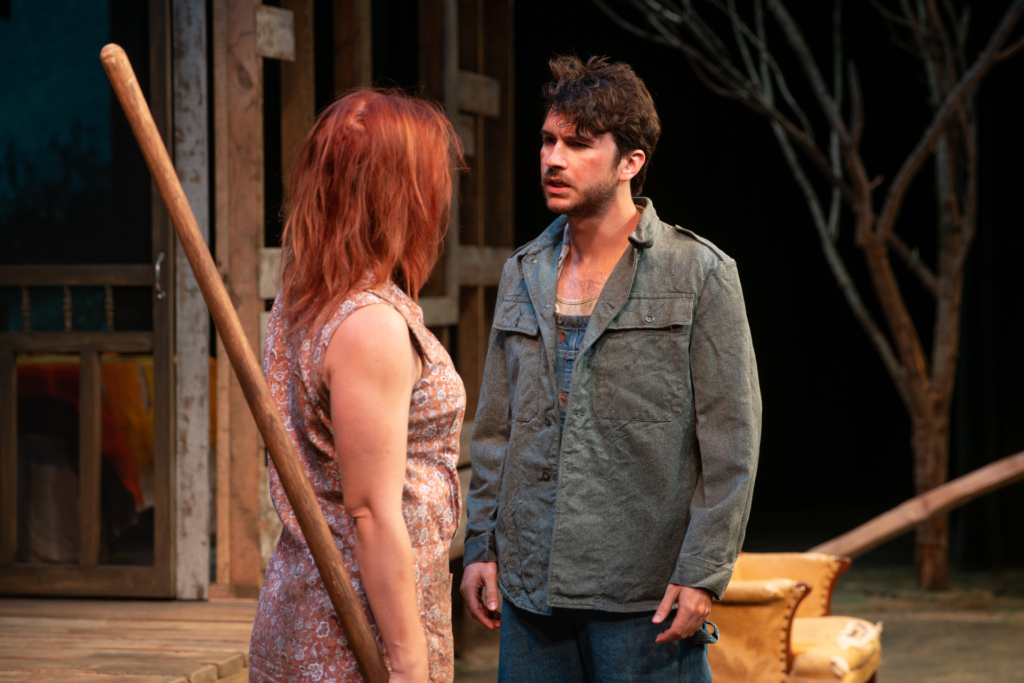 But do they breed better audiences?

That was the question I kept asking myself on the way home from the Kansas City Actors Theatre’s troubling (and troubled) production of A Moon for the Misbegotten.

A Moon for the Misbegotten was Eugene O’Neill’s last play, a sequel of sorts to A Long Day’s Journey into Night. The bridge between the two is Jamie (“Jim”) Tyrone, who has spent the 10-some years between the plays aging from a drunk philanderer to a drunker philanderer.

He’s also become a landlord with two new tenants—Phil Hogan, a poor Irish farmer, and Josie Hogan, his “great slut” of a daughter. The Hogans have thick Irish brogues and thick Irish tempers, preferring to settle arguments with fists than with calm conversation. They’re also fond of petty schemes, and spend much of the first act plotting how best to secure their financial futures.

The opening scenes drag, burdened by too much exposition and too many circuitous conversations. These are textual challenges, to be sure, but KCAT doesn’t do much to overcome them. Emotional beats stretch into emotional epochs; actors move through scenes with little sense of stakes or urgency. Some stage business might help keep things interesting, but there’s little of that, either—if actors aren’t sitting passively on a stoop, they’re crossing downstage to glare into the night. Director Mark Robbins is a veteran actor with usually good instincts, but he appears to have fallen asleep at the wheel. 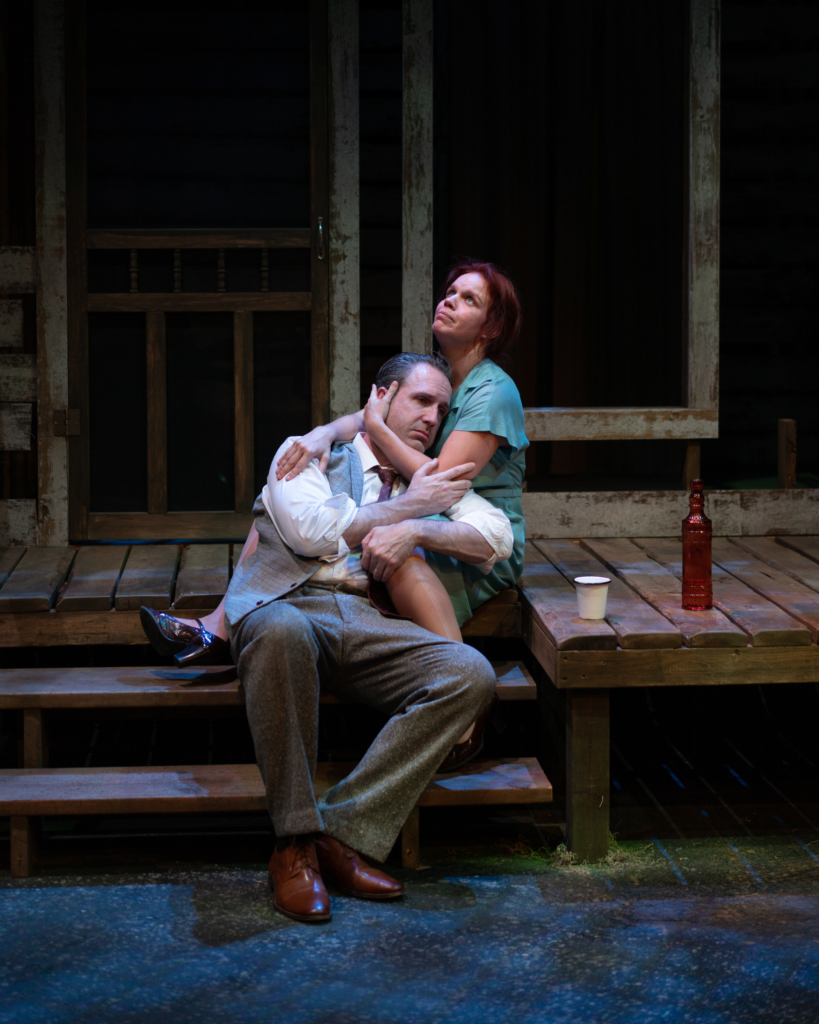 Even so, the performances show glimmers of brilliance. Ashley Pankow effectively conjures Josie’s bluster and self-protective instincts in Act I, but she shines brightest in the second half of the show: her scenes with Jim Tyrone (Brian Paulette) are peppered with moments of naked vulnerability. Victor Raider-Wexler’s accent (and ostensible drunkenness) faded in and out at Saturday’s performance, but his roguish read on Phil was often amusing—and his slapstick confrontation with oil tycoon T. Steadman Harder (played convincingly by Chris Roady) was the highlight of the show.

Paulette has perhaps the hardest task: selling us on a redemption arc for a sad-sack aspiring rapist with Mommy issues and a Madonna/whore complex the size of Connecticut. To say he almost succeeds is a compliment of the highest order. But to what end?

Act III is structured like a romance. Jim confesses his love for Josie, who is emphatically Not Like Those Other Girls. She’s “strong” and “real” and “healthy.” She’s also, chiefly, a virgin—one of the show’s Big Reveals is that Josie was lying about being promiscuous and is thus worthy of Jim’s love.

But as Jim gets drunker, the distinction between Josie and his “Broadway tarts” blurs. He loses control and pushes her roughly into bed. Josie pushes him roughly out of it. “What the hell?” Jim asks himself, dazed. “Was I trying to rape you, Josie? Forget it. I’m drunk—not responsible.”

From there, things devolve into a weary game of Misogynist Bingo. Jim blames Josie for enticing him (“But I warned you, didn’t I, if you kept on—”). He tells her she should be grateful it wasn’t worse (“You ought to thank me for letting you see.”) He excuses himself by launching into a long, self-pitying monologue about his mother’s death and his inconsolable guilt: He couldn’t cry at the sight of his mother’s corpse! He was such a mess that he wasted $50 a night plowing a “fat blonde pig on the train”!

At some point during the scene, the man in the row in front of me began snoring softly. He did not wake until Act IV.

That man had the measure of things: it’s not just that this show is offensive, it’s that it’s offensive in tired, predictable ways. Of course Josie internalizes Jim’s guilt and laps it up like a saucer of milk. Of course this is another in a long line of stories about a woman martyring herself for a “complicated” man in the hopes that her love might save him.

(A brief, glowing aside: the lighting design is great! Shane Rowse does exceptional work here, coating the set in the stark blues and stretching purple shadows of a moonlit night. His look for the end of the play is just as striking: rosy morning light dips the Hogans’ dilapidated cottage in cold romance.) 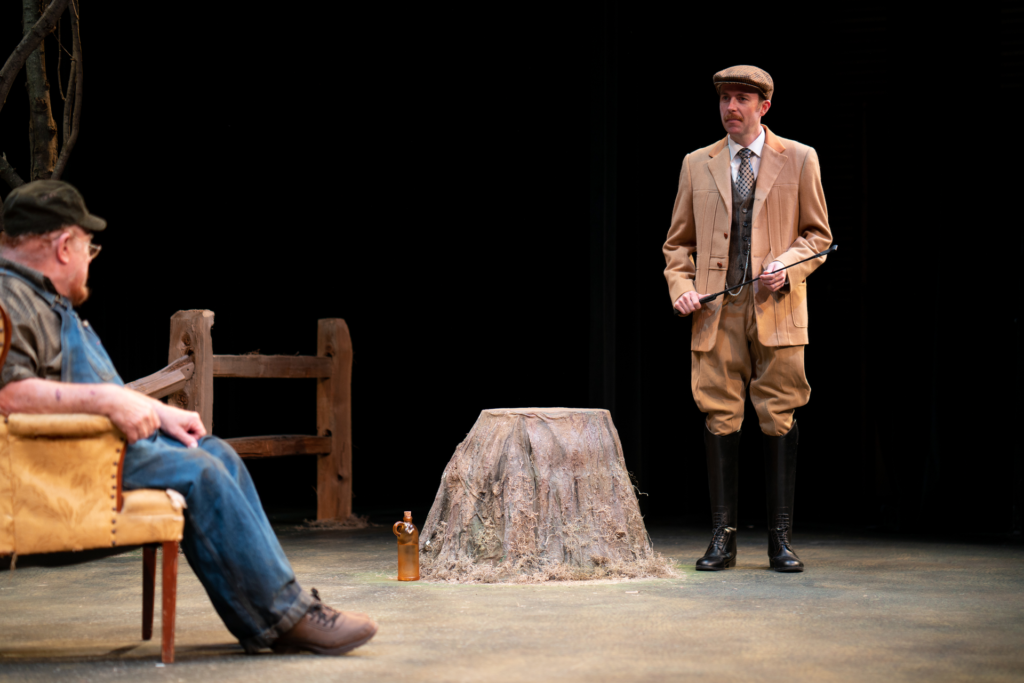 I left the theater with a basket of questions about KCAT’s season selection. Josie and Jim are undeniably toothy roles, but what do audiences get out of the bargain? What makes this play worth reviving in the year of our Lord two thousand and eighteen? And how many women’s bodies—real or fictitious—must we heap on the altar of tortured male genius before we run out of ways to pose them?

If I sound like a feminist killjoy—if I sound like I’m unfairly taking an axe to America’s loved and laudable classics—I’d urge you to read a few more. The twentieth century theatrical canon is full of muscular scripts with “problematic” politics that are worth producing because they still express something singular and urgent about American life.

A Moon for the Misbegotten is troubling not simply because of its politics but because it seems to have little to offer modern audiences beyond them. Instead, O’Neill offers us a nougaty core of banal emotional abuse dipped in a thin candy shell of romance.

Sure, the writing is poetic. But if it’s poetry we’re after, I can think of a lot more affecting ways to map the moon.

A Moon for the Misbegotten