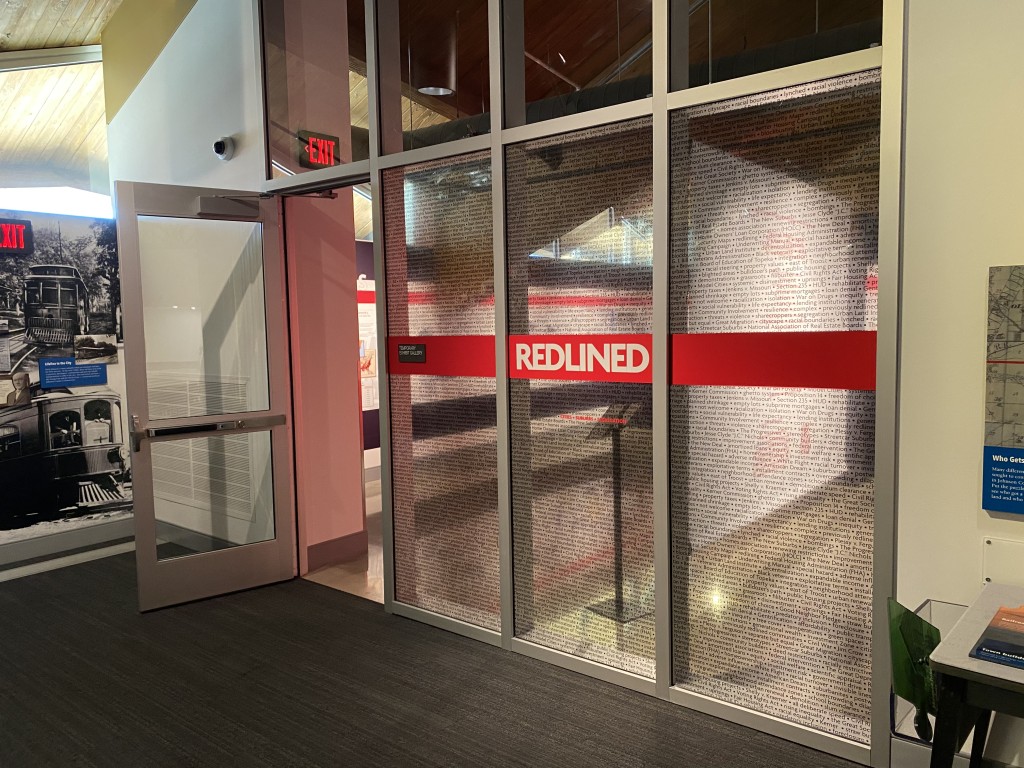 As defined on the museum’s website, redlining is the “systematic disinvestment of some neighborhoods and populations in favor of others, most often on the basis of race.” It’s a practice that began in the 1930s and led to Black neighborhoods being sectioned away by structures, like highways, as the federal government openly sought to promote home ownership exclusively for white people.

Redlining was eventually “outlawed” via the Fair Housing Act of 1968. However, the effects of this oppressive neighborhood structuring system were already set in stone. Redlined lays it out plainly: “African Americans and other people of color were intentionally excluded from the American Dream.”

This is what redlining is, but how did it start? How did it evolve? What can be done to combat it now? The answers to these questions are the ideas Redlined seeks to explore and relay to its audiences.

Curator of Interpretation Andrew R. Gustafson spends most of his time researching, writing, and installing special exhibitions at the Johnson County Museum.

“We’ve talked about redlining and segregation and fights against those systems in our main exhibit for a decade or more,” Gustafson says. “We really wanted to take a deep dive on that because it’s so integral to understanding how Johnson County as a suburban community developed.”

Gustafson, who served as project lead for Redlined, began his research into the topic of redlining around two years ago. For him and the rest of the team that worked on the project, Redlined needed to be done the right way, not the easy way.

“We got it down to a point where we felt, if we made any additional cuts, we’d be losing really important parts of the story, and how could we, as an acknowledged staff of all white individuals, make those types of decisions,” Gustafson says.

A draft of the script was sent out to individuals such as Carmaletta Williams, CEO of the Black Archives of Mid-America, for peer review. The Johnson County Museum also sought feedback from the Johnson County V.I.B.E. (Voices of Inclusion, Belonging, and Equity) Committee.

Additionally, the Redlined team reached out to around 24 learning institutions, including museums, universities, libraries, etc., to encourage them to offer similar programming for their audiences. Gustafson hopes the work results in a larger discussion around the topic of redlining.

As dense with text as Redlined is, it doesn’t forget its place as a visual experience. In-between cleverly laid out information and topical set pieces are striking art from the African American Artists Collective (AAAC).

Redlined offers a lens to look at Kansas City as a piece of a current-day puzzle. Redlining was a national practice, but its effects can be seen just outside your window.

“The exhibit offers a chance to see very local history within a national context,” Gustafson says. “There are opportunities to look at this national map that show all the cities that had redlining maps created for them. But there are also opportunities to look at the Kansas City regional map and find your house and find your block. To look at headlines from today and think about your life and how those headlines may or may not be affecting you, and why or why are they not affecting you?”

The research and collaboration resulted in an 85-page paper, which was edited into a 45-page script that was then spread out to create the exhibit that exists at the Johnson County Museum today.

Johnson County Museum Director and Historian Mary McMurray says Redlined’s message is crucial for those who hope to have a better grasp on the history that surrounds us. However, the staff has included a number of resources on its website for those who may not be able to attend the exhibit in person.

“Our dream for the museum is to spark an interest in any part of our history and leave people inspired to want to learn more,” McMurray says.

Redlined is available to experience until Jan. 7, 2023. Adult tickets start at $6. However, the Johnson County Museum will soon host several “free days” where anyone is welcome to visit at no cost. The currently scheduled 2022 free days are June 11, Sept. 17, and Nov. 23.